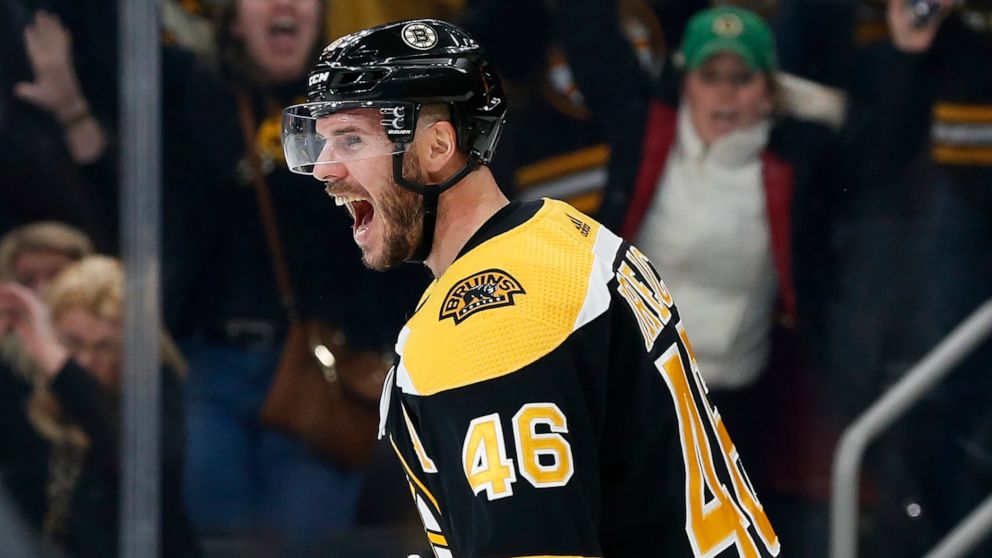 BOSTON — It all started with a save from Tuukka Rask.

With 2:50 remaining in what looked to be a hopeless third period for the Boston Bruins down 4-2 to the Wild, Jason Zucker engaged Rask for a breakaway. No. 16 faked the goalie with a shot and slid it to his backhand, but was denied by the outstretched left leg of Rask.

The save that made it all possible https://t.co/bPeFzApqDR

At first glance, it looked like a garbage time save at the end of a game that the Bruins would’ve liked to forget. They’d just blown a huge opportunity on a power play minutes prior, so not much was pointing in their direction.

But then Rask headed to the bench and on came an extra skater.

And then came the comeback.

“[Rask] has come up so many times for us and again tonight,” Brad Marchand said of his goalie. “He did that. He made the key saves at the right time. Big reason why we won. If they were to score on that breakaway the game is over.”

David Krejci picked up a puck that bounced around the front of the Wild net and threw it past Alex Stalock to cut the deficit to 4-3 with just 1:55 to go.

“You always try to practice that right in practices,” Krejci said of his first goal. “Not all the time, but most of the time, 6-on-5, get pucks to the net, crash the net and that’s what happened. [Bergeron] made some good plays there. I had an empty net.”

There was plenty of time for Bruce Cassidy to rest his main-six and go with his second unit to keep the pressure applied. That led to Charlie McAvoy getting tripped up by Luke Kunin and the B’s were sent to the power play with 1:31 remaining in the game.

TD Garden was at its absolute loudest. The Garden HDX didn’t even have to tell the Bruins faithful to get loud. The fans roared as the slew of six — Brad Marchand, Patrice Bergeron, David Krejci, Jake DeBrusk, David Pastrnak, Torey Krug — were all rested enough to put forth one last onslaught to try and come back.

“My thought process is I’d like all six guys going at least five together when they’re coming up the ice,” Bruce Cassidy said of the 6-on-5. “So we were hollering in there, Charlie [McAvoy], he was starting to go but the forwards were tired, to go back to go together. We’re just fortunate the other team didn’t forecheck hard, which typically happens, right? Because you want to defend, get numbers back. We got all our guys together, both times.

“Power play we decided we’d go right after it, right away, and it worked out. But that’s kind of our thinking typically, we’re not as mesmerized by the clock. It’s not like at two-thirty you have to go, or two minutes. We’d like it around one-forty-five-ish, two, whatever, if it’s a minute and a half. But we like all six guys to be fresh.”

All six guys were fresh and the feeling that something special was about to happen was so obvious you could reach out and grab it.

Bergeron broke his stick and raced back to the bench to retrieve a new one. As he darted back, Krejci found him at the point. Bergeron dished it right back to No. 46, who one-timed it past Stalock, sending the Garden into a euphoria.

“Great to see him get rewarded,” Marchand said of Krejci. “He’s been a huge player for our team for a long time and he’s so clutch and he’s just so calm in every situation. You want him to have the puck. He’s so poised and doesn’t feel any kind of pressure.”

ARE YOU KIDDING ME!! Krejci ties it up!#NHLBruins– 4#mnwild– 4 pic.twitter.com/Jd5dbLu58p

What looked like a nothing, Saturday night loss to the Wild became another show of resiliency for the Black and Gold.

Despite a quality chance by Coyle with seconds remaining in regulation, the Bruins and Wild needed overtime. It wouldn’t be a Bruins game without some extra time, right?

With 2:19 left in overtime, Torey Krug corralled the puck in his own zone and skated past Zach Parise, who was the main man covering him. The other two Wild defenders on the ice — Luke Kunin and Brad Hunt — realized a bit too late that Krug was about to have a breakaway, and No. 47 had himself a 1-on-1 with Stalock.

“It was like parting of the Red Sea,” Wild head coach Bruce Boudreau said of the game-winner. “I mean, you can’t skate untouched right through the middle of the ice.”

Krug won that battle with a backhand right through the legs of the Wild goaltender.

For Krug, the win included more than one comeback. The offensive defenseman also made his comeback to the lineup after a five-game absence due to injury.

“It’s obviously great,” Krug said of his return. “It shows that we can find ways to win. Sometimes we’re down, but we’re never out. That’s a characteristic of this team is that we’re always in games. You don’t see too many games throughout the season where we’re out of it.”

But as nice a goal as Krug’s winner was, none of that would’ve been possible without the resiliency shown by the Bruins in the last three minutes of regulation.

And it all started with a save from Tuukka Rask.