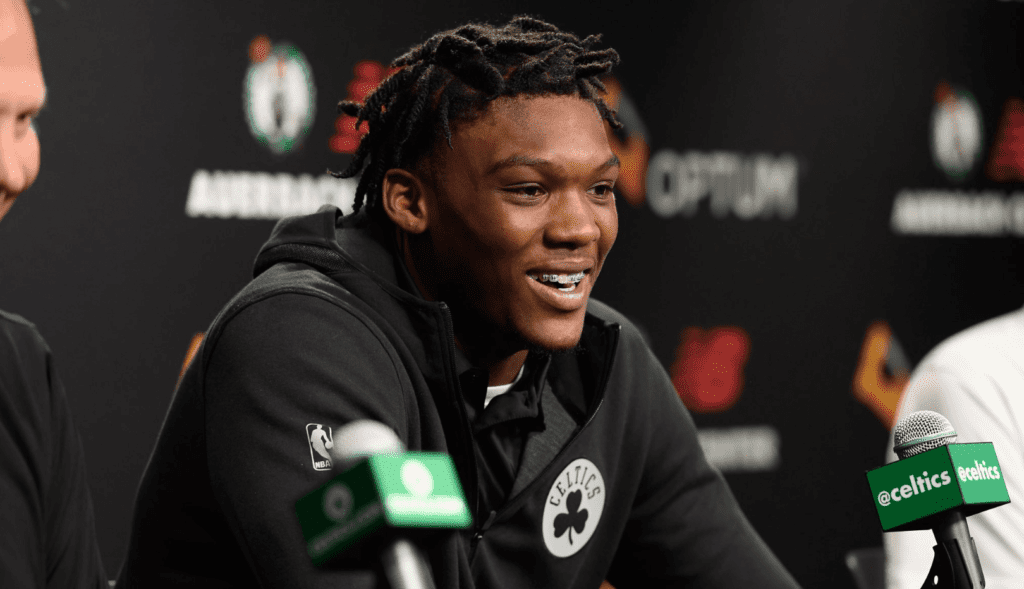 BOSTON — Everything will be fine with Robert Williams.

The knee-jerk reaction to his absence Sunday after he missed his flight from Louisiana up to Boston was to think the Celtics might have made a big mistake in drafting the 6-foot-10 big man out of Texas A&M. (Full disclosure: I had that initial thought)

The situation is not ideal. The Celtics’ brass know this as well as anyone.

Danny Ainge’s introduction of Robert Williams last Friday at the team’s brand new facilities in Brighton was to make light of Williams oversleeping for his initial conference call with reporters a week earlier.

But just two days later, it was no joke as long-time Celtics PR maven Jeff Twiss opened what should’ve been a routine media briefing from Summer League head coach Jay Larranaga with the announcement that Williams missed his flight to Boston.

“Questions?” Larranaga sheepishly offered, knowing full well what he would have to answer to next.

“We expected him to be here but obviously, he missed his flight,” Larranaga said. “We’re excited for him to get here and get started.”

Williams did make it on Monday and got his start with the rest of the rookies and second-year players. Everyone, Celtics included, could take a deep breath.

“Yeah, I think everyone’s disappointed,” Larranaga continued. “You want to get everything off to a good start on the first day but we’ll handle it internally and move forward.”

Jaylen Brown and Jayson Tatum got the message and didn’t need second and third chances but not every kid coming out of college is the same. Why are these days so important?

“I think introduce the whole (rookie) group to our system, our culture, how we do things as quickly as possible and after that, just learn as much as possible about the players so we can put them in a position to be successful,” Larranaga added.

The Celtics weren’t making any excuses or making it sound like “miscommunication,” as was the case on June 22. This was on Williams.

For a kid who the Celtics knew was a talented, rim-protecting big, the positives are there for everyone to see. But now, in just 10 days, so too are the negatives, namely immaturity.

This is where Al Horford and Aron Baynes come in. They will no doubt sit down with the young man and spell out just what it means to be a professional and get paid to play in the NBA, and the expectations of a first-round pick of the most storied franchise in basketball history.

It’s ironic that Baynes announced Sunday, just as Williams was supposed to hop on a plane for Boston, that he would be coming back to the Celtics. They’ll need his presence that much more as it appears not a wise move to depend heavily on Williams until he can prove his reliability and maturity.

If Marcus Smart stays and signs his restricted tender, he might be able to get through to Williams better than anyone. He had some of the same maturity issues, only with regard to his temper and his self-control at times at Oklahoma State. He has been widely considered the most impactful leader over the last several years inside the Celtics locker room.

The great, championship Celtics teams have always possessed a remarkable sense of leadership and accountability. There’s plenty of that on the roster and that should help the Celtics help their rookie through this difficult period.

By all accounts of those close to Texas A&M, Williams, who turns 21 on Oct. 17, is a good kid. He is not a trouble-maker. He does, however, clearly have issues with accountability and maturity. These are not deal-breakers.

He showed up Monday on time for his first official Summer League practice. The team will open Summer League in Vegas on Friday against Philadelphia. Will Williams make the trip? Probably. Could he sit out a game? Maybe. That’s up to Danny Ainge and Brad Stevens to decide.

There needs to be some sort of discipline taken here. Everyone knows that. You can’t just say, “Next time, Robert, it’ll cost you.” There has to be a penalty to be paid that makes him appreciate a lost opportunity. Now, in the middle of summer, is probably the time to hand it out.

As a matter of fact, if you really want to take the optimistic approach, Celtics players, coaches and front office workers now have a huge hammer of motivation they can hold over Williams to make sure he stays to the straight and narrow, making all practices and team commitments, on and off the court. The team’s community affairs department, headed by Heather Walker, should have no problem getting the first-round pick to go along with any “volunteer” appearances at schools or community buildings. The “volunteer” tag has all but been taken off these with regard to Williams.