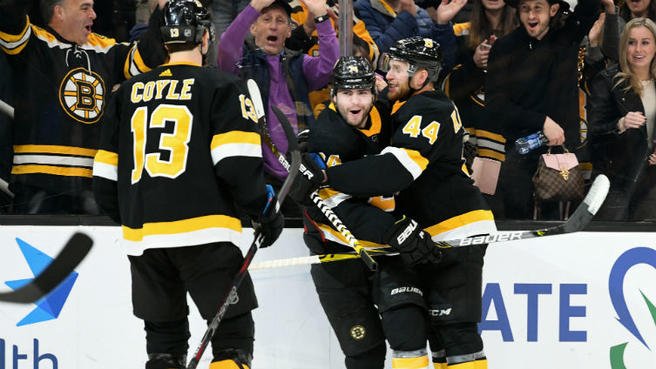 What would end up being a heroic Sunday night for Jake DeBrusk didn’t start out so epic.

He watched most of the first period from the bench. He sat as the barrier between the rest of his fellow forwards and the defensemen. At one point, Matt Grzelcyk tapped him on the knee in what appeared to be a move of encouragement.

Bruce Cassidy was sending a message.

“It’s a little bit about some of the messages with these guys now that are in that they’ve been in the league, but they’re not the Marchy’s of the world,” Cassidy said after the Bruins 3-2 win over the Sabres. “It’s a privilege to put on the Bruins sweater every night and you might not have your A-game, but you’ve gotta have your B-game to help the team win and be a good pro. So that’s a little bit of the message between periods.”

DeBrusk’s A- and B-game may have been lacking in the 2:22 of ice-time he played in the first frame, but it certainly came back over an 18-second stretch in the third period.

His response to the message started on the power play less than three minutes into the third period.

Steven Kampfer had the puck at the blue line and was looking to shoot when DeBrusk emerged untouched and uncovered from the corner. Kampfer’s slap-pass deflected off DeBrusk’s stick and over Linus Ullmark to give the Bruins a 2-1 lead.

“I looked up and [Kampfer] has an underrated IQ and we made eye contact and I knew it was coming,” DeBrusk said of his first goal. “So I was just thinking about where to put it and I’d missed a lot of those this year, so to see it go in was nice. It was an interesting game tonight.”

Interesting is the perfect word to describe what happened just 18 seconds later when DeBrusk took the puck down the left side and threw it towards the slot. The disc bounced off Ullmark and went in the back of the net to make it 3-1 Bruins.

Two goals for the kid who not even 40 minutes prior was deep in Cassidy’s doghouse.

“Definitely a good one,” DeBrusk said of the feeling after his second goal.

DeBrusk’s two goals came in his normal style — the first coming off a tip from in front of the net on the power play, and the second by way of getting the puck on the net from anywhere. The most impressive part is that they came under some extra pressure on Sunday night.

“You want a response in some way, shape of form,” Cassidy said of the benching. “Two goals is a good response.”

While DeBrusk sat for the majority of the first 20 minutes, lots of things ran through his head as he pondered how to meander his way back into Cassidy’s rotation.

“There’s obviously lots of emotions going on,” DeBrusk said. “You obviously care and have pride in yourself and one of those things that like I’ve said, I’ve kind of been in this situation before so it’s one of those things you never want to happen as a player but usually I respond pretty well, so it was nice to get the two goals there.”

This isn’t the first time in which DeBrusk’s been benched or been on the receiving end of one of Cassidy’s messages. But what surprised him most about this instance was the timing of it — after not blocking a shot early in the first period.

“I didn’t really have a feeling on the game at all, so it was a little bit different in that sense,” DeBrusk said. “But just wanted to go out there and help the team.”

Cassidy’s never been one to shy away from sending messages to players on the team — it’s part of what’s made him effective over his tenure as the bench boss in Boston.

He’s constantly switching around the guys on the third and fourth lines and loves to jumble them up mid-game. Then there’s the occasional switch-up with the top-six. On defense, Connor Clifton and John Moore were battling for the sixth spot until Charlie McAvoy and Torey Krug went down with injuries.

“Internally, the message you usually send is — listen as long as it’s not personal and you’re trying to get them to play the right way, I think the guys will back you up on that,” Cassidy said. “I really believe that. Only they can speak to that. That’s what we have to ensure is that the message is sent in the proper manner, pretty direct and then give them an opportunity to play their way out of it.”

DeBrusk certainly played his way out of it on Sunday night. Even before his two goals, he returned to David Krejci’s left side and the second power play unit in the second period.

With this being his third season in Boston, DeBrusk has experienced his own reactions to Cassidy’s message-sending first hand. He’s also witnessed many other guys on the team react to Bruce’s benchings.

“I think it goes different with every player to be honest with you,” DeBrusk said. “It depends on situations, things like that. Obviously like I said earlier no one wants to be in that position.”

And for when the Bruins don’t take so kindly to Cassidy’s actions?

“It means when they stop responding, I’m probably out the door,” Cassidy said. “That’s probably what happens to a lot of coaches, I’ll be perfectly honest with you. You’ve got to find a different way to send your message.”