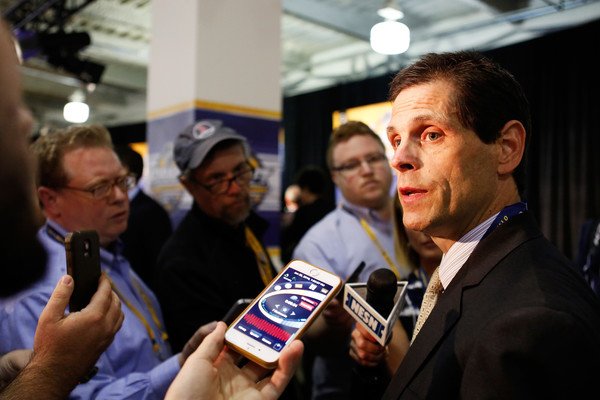 Mayor Marty Walsh has to figure out how to fix the Boston traffic problem, the MBTA must end train derailments, and keeping crime levels low around the city will always be a pain in the side of law enforcement.

But no one has a tougher job this summer than Don Sweeney’s configuring of the salary cap for the Boston Bruins.

Obviously that’s hyperbole; Sweeney’s job isn’t tougher than that of Walsh or the MBTA. However, what Sweeney does over the next few months with the salary cap will be his biggest test yet as general manager.

He already re-signed one of his big restricted free agents when he inked Danton Heinen to a two-year deal with an AAV of $2.8 million. The B’s have roughly $7.29 million in cap space as currently constructed. That’s not very tight until you realize that Charlie McAvoy and Brandon Carlo are both in need of new deals and Torey Krug is an unrestricted free agent after this upcoming season.

With that in mind, Sweeney must open up more cap space to at least lock McAvoy and Carlo down. Here are the five best ways to do it.

The easiest way to open up cap space would be for Sweeney to deal off two defenseman who aren’t even in the top six on the Bruins.

Kevan Miller has a cap-hit of $2.5 million for this season and John Moore carries one of $2.75 million through 2022-23. Bruce Cassidy elected to insert Moore in and out of the lineup during the postseason, as he only played in 10 of 24 games. Miller didn’t play at all during the postseason due to a plethora of injuries.

When he was in the lineup for the Bruins during the playoffs, Moore had the second-lowest Corsi For per 60 minutes at 42.59. Losing Moore would be an easy way to free up $2.75 million in cap space. The only obstacle to trading Moore would be that he had shoulder surgery in June and will be out 4-6 months.

Trading Miller wouldn’t be easy for a couple of reasons. No. 86 is popular in the B’s dressing room and has been since 2013 — it would be far from a popular move to deal the 31 year old. Also, Miller probably won’t be ready for the start of the season since he’s recovering from a fractured knee cap suffered at the end of the regular season.

The easy move is to trade Moore and free up some cap space. But if Sweeney wants to get real crazy, he’d also send Miller elsewhere to free up more than $5 million in cap space. It may not be popular, but it could end up being necessary.

Here it is: Part 1 of @RealJackEdwards talking with @emarinofsky about…

2.) Do Something with the David Backes Contract

Now this is a tougher job than fixing Boston’s traffic problems and train derailments. That’s not hyperbole; that’s a fact.

Because the Toronto Maple Leafs had to give up a conditional first-round pick and a seventh-round selection with Patrick Marleau just to get his contract off the books, the market was set very high for shedding bad contracts.

On top of that, Backes’s contract only allows him to be traded to his own list of eight teams this summer. The three teams with the most cap space are the Ottawa Senators, Winnipeg Jets, and Colorado Avalanche. It’s highly doubtful that any of those three cities are on Backes’s list.

The third route the B’s could take with Backes is to send him down to Providence, which would create $1.075 million in cap space.

There’s no easy option with the Backes contract and nothing that’s a good enough fix. Unless Sweeney can create a time machine to go back to July of 2016 and stop himself from signing Backes, there’s not much the Bruins can do with this one.

Losing Torey Krug would be a huge loss for the Bruins. Most unfortunate for the Bruins is that this would be the easiest way to free up a lot of cap space for now and in the future.

Krug’s current deal has him earning an AAV of $5.25 million through next season. After 2019-20, he’ll be a free agent and primed to get a lot of cash. It’s expected that Krug becomes the highest paid Bruin.

Trading Krug would free up cap space now and allow the B’s to get something good in return since his value is extremely high. If the Bruins kept Krug through next season, Sweeney would have to do cap gymnastics to pay him what he’s worth unless no. 47 opts to take a team-friendly deal. On top of that, if the B’s couldn’t pay up to Krug’s standards, one of the league’s best offensive defenseman would walk.

Trading or letting Krug walk is the last thing the Bruins should want to do — he’s one of the most dynamic players in hockey. If Sweeney can find a way to keep Krug, he should absolutely do it.

Jaroslav Halak was a huge reason as to why Tuukka Rask was dominant in the postseason — his consistent, stellar play allowed the Bruins to rest Rask during the regular season.

But the Bruins are in dire need of cap space and even though losing Halak’s AAV of $2.75 million wouldn’t cure all, coupled with dealing another contract in the same ballpark, it would help free up cap space.

Halak is 34. When talking to him at Stanley Cup Final media day, he seemed unsure about playing past the 2019-20 season when his contract is up.

The two-goalie system worked perfectly last season and it’s one that many other NHL teams have successfully pulled off. The only problem with Halak is that he’s infamous for his inconsistencies and last year could’ve just been lightning in a bottle.

Do we really expect Halak to repeat what he did last season?

The Bruins signed goalie Maxime Lagace to a one-year deal worth $700,000. In no way would he be expected to replicate what Halak did this past season, but he’s only 26 and does have NHL experience.

Trading Halak is far from the best option. But if it comes down to needing the extra cap space, it may be worth dealing Halak and making the $7 million goalie play 10-15 extra games. Just trying to think outside the box, folks.

The “Trade David Krejci!” crowd has been at it for years and ironically enough, the year they have the best case for it comes after his best offensive season since 2008-09.

The only reason the Bruins would deal their second line center is because he has an AAV of $7.25 million through 2020-21 and getting that contract off the books would be a huge opening in cap space.

Replacing Krejci would be almost impossible; the one-two punch of Patrice Bergeron and Krejci down the middle is among the best in the NHL. Aside from Jack Studnicka on the doorstep and John Beecher in the pipeline, the Bruins don’t have much that would satisfy Krejci-like production in the now.

For that reason, dealing Krejci would be the least desirable of all these options.