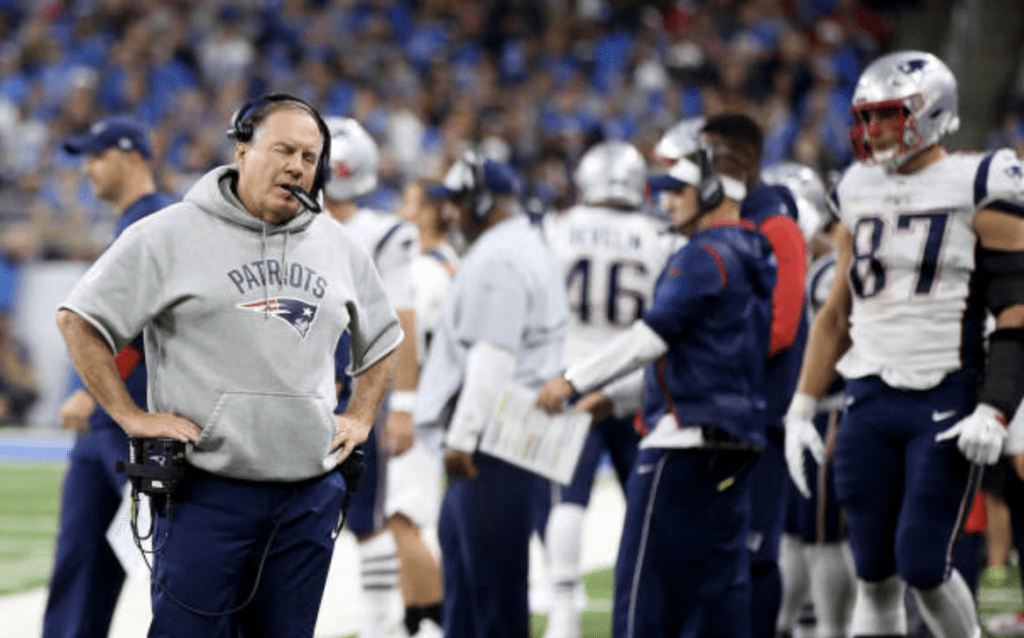 Ever since the Patriots laid an absolute egg on the turf of Ford Field Sunday night,
more and more people, credible and otherwise, have said this seasonal sluggish start “feels different” and that this actually could be a season we all see Bill Belichick and the Patriots plummet back to the rest of the NFL.

Even his close confidant Michael Lombardi wrote as much in his column for The Athletic, indicating that New England’s offensive woes might be too big for even Belichick to fix.

The offense is three players right now, at least for one more week. Josh Gordon this week may join Brady, Gronk and James White as a legit threat. Julian Edelman comes back against the Colts on Thursday night football. The defense isn’t defeating blocks consistently, the linebackers are (again) having lots of problems in space and the secondary is inconsistent in coverage and communication.

But if we’ve learned one thing about the Patriots under Belichick, no hole is ever too big. And it starts with the mentality.

Off the field, the Patriots under Belichick have dealt with Spygate turbulence through the perfect (regular) season of 2007, the Aaron Hernandez drama and fatal tragedy in 2013, the moronic Deflategate controversy of 2014, last year’s Robert Kraft, Bill Belichick and Tom Brady tug of war and this spring’s Brady-Gronk protest of offseason workouts.

No one in the NFL has a resume for working through crisis like Bill Belichick. Speaking with Ian O’Connor this week for my Patriots Beat podcast, the author of “Belichick: The Making of the Greatest Football Coach of All Time” told me that the skills of the coach to manage anything and everything that comes up is just as great as his ability to prepare and coach his team strategically.

And O’Connor couldn’t be more right.

“Look, that’s the National Football League,” Belichick said on Tuesday. “It’s a 16-game season. Every team faces adversity over the course of 16 games. So, every team will have an opportunity to deal with it and it will happen more than once to everybody. So, when those opportunities come up, we’ll see how, again, individually each of us and collectively as a team how we fare.”

Matthew Slater indicated immediately after Sunday’s game that the team’s toughness is still to be determined. Belichick agrees.

“We’ll see it over the rest of the remainder of the season,” Belichick added. “I mean, every week’s tough in this league, so we’ll see how we handle it. Look, each individual and each team has to prove it every year and every week, and regardless of what any of us have or haven’t done in the past or whatever, we’ll see what happens this year and so will everybody else. We’ll all know the answer to that question as we go through and we march through the season.”

I asked Belichick about the struggles of the run game in the two losses, as the offensive line couldn’t sustain blocks. But Belichick was the one to take the question and run to a place that showed exactly what the issues are on the team all around after three weeks. took it and

“We’ve had our moments where it’s been good, other moments where it hasn’t been good,” Belichick told me. “It’s been inconsistent. We need more consistency in every area of our game. So, the answer’s the same for all of it – running game, passing game. We haven’t been consistent enough. (And) I’d say we could talk about all of it – the line, the tight ends, the fullback, the receivers, the running back, reading the blocks and coaching, too. You can throw it all in there. All of it – all of it we’re working on. We all need to do a better job. We need to improve all the way across the board.”

In years past, the Patriots would find their magic elixir and handle the Dolphins this Sunday to get things somewhat back on track, with the Colts at home on a short week ahead. In years past, this would just be the fourth game of the annual Belichick September preseason approach. But unlike that fourth game against the Giants every year in August, this fourth “preseason game” is a must have.

Time for Belichick to solve another crisis.