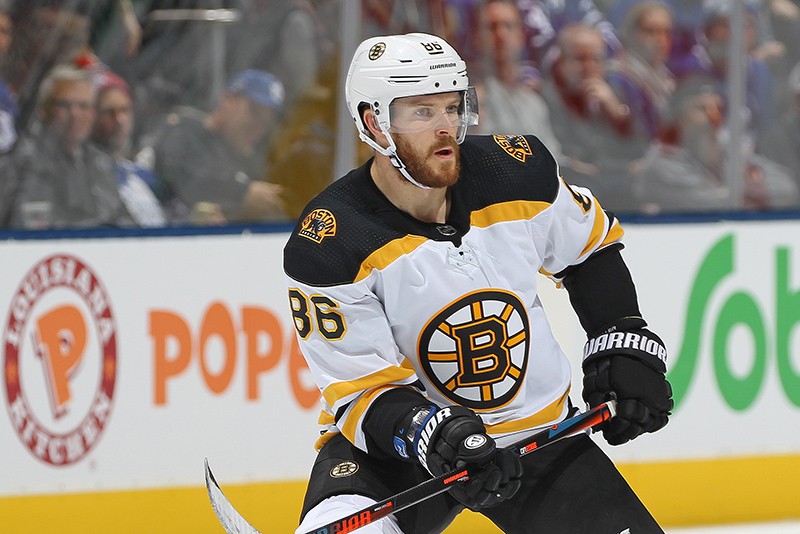 Miller covered Studnicka while Zboril took DeBrusk in the 2-on-2 off the rush. Studnicka cut to the middle and with DeBrusk covered by Zboril, he took the shot. Studnicka’s snapshot never found its way to the net though because Miller went down and took the shot off his foot.

Miller and Zboril are an unlikely pairing. If you polled Bruins fans right after last season ended in defeat to the Lightning, many might’ve assumed both defensemen wouldn’t even be on the roster come 2021.

Miller’s lengthy injury problems and not having played since 2018-19 were the reasons why many didn’t see the Bruins re-signing him. Zboril had already been deemed a first-round bust after going 13th overall in the 2015 draft and failing to stick in the NHL to this point.

Both will fight different battles to stay in the lineup this season.

For Miller, it’ll be staying healthy and overcoming the fractured kneecap he dealt with during 2019-20.

“It’s been a long road,” Miller said in a Zoom call Sunday. “I’m feeling 100 percent. Obviously there’s a little adjustment getting back and getting into drills and playing scrimmages and things and it’s been a good couple of days. So far, so good. I’m really looking forward to Thursday.”

Another aspect of Miller’s job will be mentoring Zboril. Through six days of training camp, it’s evident Miller knows this. Between reps in drills, Miller can be seen talking to Zboril and pointing things out. On breakouts, he loudly tells Zboril what to do.

Miller’s no stranger to mentoring a younger d-man. He did it back in 2017-18 when paired with Matt Grzelcyk.

“It’s part of your responsibility,” Miller said of mentoring Zboril. “I do have to make sure my game is going, but I think it’s something that helps me get more ready quickly, something I’m taking on and appreciate that the coaching staff and players put that trust in me to do. It’s just a natural progression of a job that you get as you get older. I’m the old guy on D now.”

“When it comes to what [Miller] can do for Jakub, push him everyday in practice to be the best pair, to build in the habits of a good pro,” Bruins head coach Bruce Cassidy said Sunday. “Jakub’s been up and down, but he hasn’t been here full-time…We want him to be the consistent defensive presence until Jakub finds his way through the league, what he can and can’t do.”

The Bruins know Miller is the “old guy on D now”. They also know Miller brings a much-needed physical presence to their backend and he’ll kill penalties consistently. His role is fairly carved out and one Cassidy and the coaching staff know what to expect from.

The same can’t be said for Zboril.

Yes, they know he’s a solid puck-moving defenseman. But what they don’t know is how that translates to the NHL level.

“We want him to play to his strength,” Cassidy said of Zboril. “Move the puck, make a good first pass. He’s really good at that. Get the puck into forwards hands into good spots where they can get attacking and be part of that transition. And then build your defensive game in terms of your ability to compete, second effort on pucks, value the matchup you have that night. We feel they can complement each other.”

This isn’t the first time Zboril and Miller have been paired together. These two have seen time on the same pairing in past camps as well, which has given Miller a front row seat to Zboril’s growth.

“He’s made leaps and bounds since the first time he got here to where he is now,” Miller said of Zboril. “He’s competing, he’s ready to go for practice, he’s a guy that makes sure he’s detail oriented now. I think that’s something that when he first got here, it was a little bit different but now he’s learned and done a great job at maturing and growing with the game, so I’ve really enjoyed playing with him.”

Miller and Zboril project to be Boston’s third defensive pairing, but it’s subject to change. If Zboril is shaky to begin, expect Cassidy to insert John Moore. If Miller gets injured or doesn’t perform at the level the Bruins expect him to play at, Connor Clifton will get the call.

Nevertheless, Miller and Zboril will get their shot at full-time minutes on the third pairing.

Consider it a second chance.