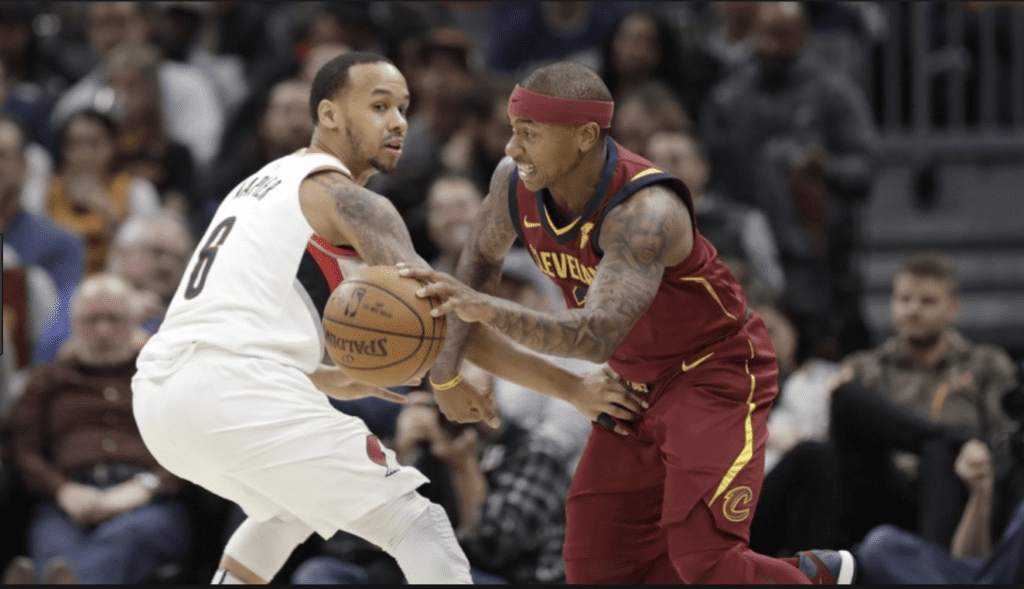 The Celtics president of basketball operations, when not on his phone leading up to trade deadline talk, had to at least raise an eyebrow at the work his counterpart in Cleveland was doing to deconstruct his roster and put it back together in a period of two hours Thursday morning.

But Ainge doesn’t need to make major knee-jerk reaction moves for a team that is 39-16 and sitting at the top of the East, the Raptors on their heels. The Celtics and Raptors (37-16) are in great shape at the trade deadline.

The Celtics would more than likely be ready to wait on a busy and active buyout market, as teams buy out veterans to clear cap space and manage rosters for the future.

Joe Johnson is expected to seek–and receive–a buyout from Sacramento, per sources, and will be coveted: Golden State, Boston will be among the early favorites.

The Cavs? Let’s just say Koby Altman had seen enough of his team’s despicable meltdown over the last two weeks.

Altman, in a series of four moves, traded Isaiah Thomas, Channing Frye and a first-round pick to the Lakers (for Jordan Clarkson and Larry Nance Jr.), Jae Crowder and Derrick Rose to Utah, Dwyane Wade to Miami and Iman Shumpert to Sacramento and brought Kendrick Perkins in to restore some sense of leadership in the locker room that apparently was tuning out LeBron.

That’s six players out from a team that had quit going into the trade deadline.

The Thomas move was a sign from Altman that his game was never going to work with LeBron. The sense of sympathy for Thomas is strong but he essentially shot his way out of Lake Erie by suggesting that coach Tyronn Lue wasn’t making the right adjustments during games. Those adjustments, ironically, include defense, where the Cavaliers were AVERAGING 125 points allowed on defense and Thomas, since returning, has clearly been a defensive liability.

Most Celtics fans wanted things to work out for Thomas in Cleveland as long as it didn’t involve games against Boston. They saw what he played through physically and emotionally last spring, leaving his body on the court with a heavy heart after the loss of his sister, Chyna. For the three-plus seasons in Boston, Thomas embodied everything true about Celtic Pride. He might even be bought out by the Lakers and available to return to Boston.

It didn’t translate in Cleveland and the Cavs had no intention of replicating it. They had to address a season (likely LeBron’s last in Cleveland) that was headed to the drain and into Lake Erie.

Following a win on Dec. 21 over the Bulls at home, the Cavaliers stood 24-9, fast on the heels of the Celtics in the Eastern Conference. They appeared to be finding their groove with the likes of LeBron James, Kevin Love and Dwyane Wade leading a veteran group. They had the prospects of Isaiah Thomas joining the band right after the new year and there was the sense that Cleveland was primed for a run.

Then the bottom fell out right around the time Isaiah returned from his hip injury.

“IT has had a difficult and very challenging basketball journey over the last year as he has worked extremely hard to make progress in his return to play,” Altman said. “He is a true competitor and that will certainly help him in his continued work on the court.”

They lost three straight on the road to Golden State, Sacramento and Utah. After losing in Boston and winning at home against Orlando, they were blown out in four straight games and the machine was leaking oil badly.

They barely beat the Magic again, 104-103 at home, before allowing 148 points at home in a humiliating 24-point home loss to the Thunder. On national TV Saturday night, they were emasculated by 32 again on their home court by the Rockets. Then, the final straw came Tuesday night in Orlando. Up by 20 in the second quarter, they lost by 18, a 38-point turnaround.

A roster filled with aging veterans was out of gas and heart. The Cavs (31-22) sit in third place and had lost 13-of-19 before Wednesday’s escape act at home against Minnesota in overtime.

The Cavaliers figure to be rejuvenated with fresh faces. Obviously, these faces will take time to gel and Kevin Love is still sidelined with his broken hand.

What’s all the more interesting about Cleveland’s house-cleaning is that it’s not necessarily all about making a run this year. Their roster just got younger with the additions of Clarkson, Nance and Rodney Hood (all 25 years of age). Then there’s George Hill, a proven veteran guard.

What Koby Altman did Thursday was to demonstrate that he’s ready to do what it takes to reset a roster that gone into the tank.

The Celtics will get an up close and personal look at the reworked roster Sunday when they raise No. 34 to the rafters. At least Paul Pierce won’t have to worry about that tribute video interrupting his ceremony.