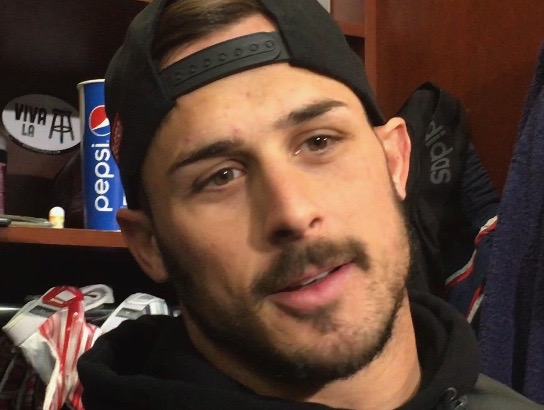 Nothing is certain with the Patriots but change. The Patriots may or may not be worse in 2018. But they will be different without Nate Solder and Danny Amendola. The first few days of free agency 2018 feels like the last two winter storms that blitzed New England, leaving power lines and broken trees in their wake.

The loss of mainstays Solder, Amendola, Dion Lewis and Malcolm Butler feels like the loss of your favorite tree in the backyard. The look will never be the same.

Taken one-by-one, you understand the Patriots’ logic. They’re not going to pay for past performance and they’re apparently definitely not involved in paying premium prices for chemistry building that hamstring their salary cap.

Collectively, you wonder if the Patriots will be the same. This is what the likes of Tom Brady, Devin McCourty, Dont’a Hightower and (presumably) Rob Gronkowski must all be wondering.

Obviously, the Patriots have almost never been HUGE spenders in free agency and they have NEVER engaged in a bidding war. That just isn’t in their operational philosophy.

Tyrann Mathieu came suddenly on the market Wednesday and the first knee-jerk reaction in New England was naturally how great he would look alongside Devin McCourty, Stephon Gilmore, Duron Harmon, Eric Rowe and Jonathan Jones. It would immediately fill a void and weakness exposed by the Eagles in Super Bowl LII without Butler.

Then you think for all of 60 seconds and reality hits. The Steelers, Panthers and Seahawks all have gaping holes in the secondary where Mathieu would immediately fit.

The Patriots never bid against themselves, let alone three other teams in the market for an elite free agent. Yes, they have needs in the secondary, left tackle and slot receiver but the biggest void might be in the locker room.

Which brings us to the curious decision to release 32-year-old Danny Amendola. The Dolphins scooped him up for two years and $12 million, with $8.25 million guaranteed. This is the decision that opens itself to the most scrutiny.

Amendola brought much more than clutch playoff performance to the locker room. He brought a type of leadership and attitude that clearly rubbed off on the likes of Julian Edelman, Tom Brady and Rob Gronkowski, all of whom took to Instagram to say thanks and best wishes as Playoff Dola takes his persona to another locker room in much need of an attitude makeover.

It was a honor playing with ya the past 5 years @dannyamendola Thanks for all the hugs and memories! Stay lit, Be FREE, Be HAPPY. Your hard work, the way you play at your size, the pain you fought through, the hits you take and get right back up talking shit back. I appreciated it all. Congrats. Enjoy Miami kid.

There must have been some lengthy discussion as to the intangibles Amendola brings and the insurance he also brings, even at the age of 32. But this is where history is your best teacher when it comes to the Patriots.

Wes Welker was in almost the identical spot after the 2012 season. He was 31 and had just put up great numbers (118 catches, six touchdowns and 1,354 yards, second-most in his career). Amendola didn’t put up those numbers in the regular season but Amendola’s performance against Jacksonville was the stuff of legends and his efforts in Super Bowl LI and LII are among the best by any receiver in the history of the Super Bowl.

The Patriots are letting go of their most productive Super Bowl receiver in history. In three Super Bowls, Amendola has 21 catches, 278 yards, two touchdowns and the two-point conversion that sent Super Bowl LI to overtime.

But the Patriots never pay for past performance. Ever. Maybe they think 32-year-old, 6-foot-3 Jordy Nelson has more left in the tank and can be had for less than Amendola. Or maybe not. It’s hard to imagine they would pay more for wide receiver about the same age and an unknown in the locker room. But who knows?

Which brings us to what next?

With left tackle Solder off to the Giants, the Patriots will likely start 2018 with Marcus Cannon at left tackle and Cameron Fleming and LaAdrian Waddle doing battle on the right side. There’s 6-foot-6 third-round pick Tony Garcia coming off an NFI illness that forced him to miss all of 2017. There’s Andrew Jelks and Cole Croston from the college free agent class of ’17. There’s the upcoming draft. The Patriots feel there’s enough there not have ponied up the four years, $62 million ($35 million guaranteed) that Solder received.

The Patriots can only hope that they don’t suffer the same fate as the Bengals, who let last year’s top left tackle Andrew Whitworth leave for the Rams for three years and $33.7 million. The Bengals were a turnstile at left tackle and a big reason why Andy Dalton and the talented Bengals offense were miserable for the first half of the season.

At corner, the Patriots were never going to match their OWN offer to Butler last year of six years, $66 million ($25.5 million GTD). So the Titans swooped in this year and offered five years, $61 million ($24 million GTD). The Super Bowl only punched Butler’s ticket out of town. The Patriots will take their chances in the draft and Jonathan Jones coming back healthy to add to a group that includes Gilmore and Rowe.

At running back, again the Patriots love what Dion Lewis did for them. He was arguably their most productive offensive piece in the final half of the season. It earned him four years and $20 million with Butler in Tennessee. This loss should not surprise anyone and it certainly didn’t stun the Patriots. They are presumably working on a deal for Rex Burkhead but if that comes back too pricey, then best of luck Rex. His presumed market value is two years, $6.6 million.

There’s still plenty of time between now and the draft April 26-28 in Dallas. There could be free agents on the radar that no one saw coming.

As was the case after these two huge winter storms, once you clean up the mess and start to rebuild, the sun comes out and everything can look new again. It just takes time and patience. The foundation – Bill Belichick and Robert Kraft – are still there and the house that Tom Brady calls home still stands.

That seems to be all that matters at this point. The rest is just window dressing.