The Heat outscored the Celtics 39-14 in the third quarter in a game where Boston won the other three. Boston spiraled, turning the ball over and fouling. 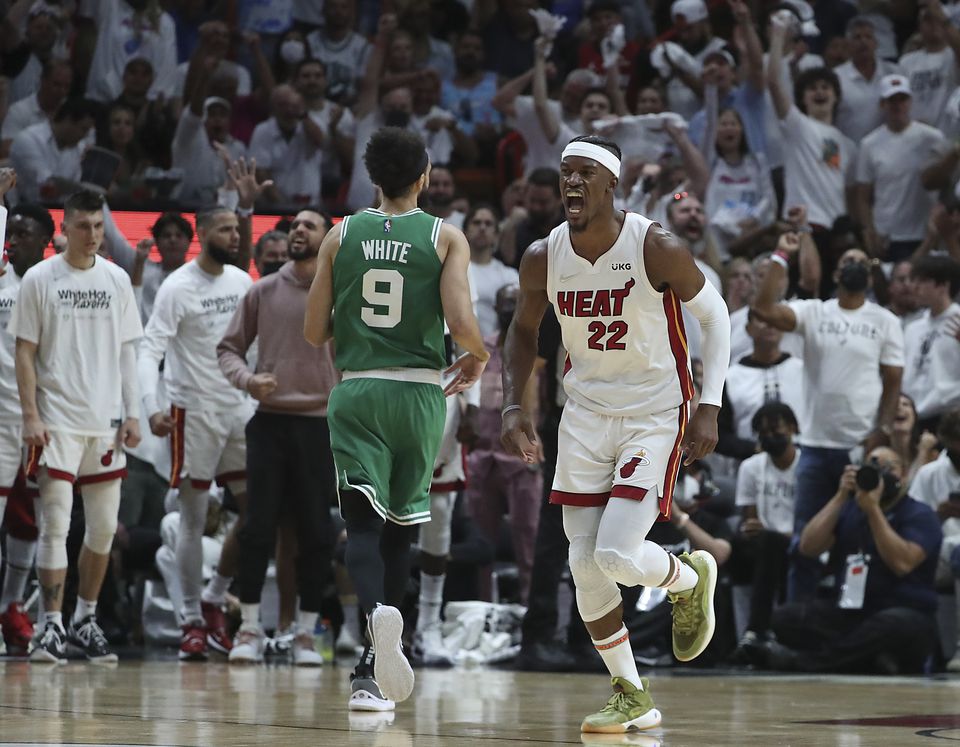 MIAMI — Bam Adebayo and the Heat watched Robert Williams III soar behind their defense four times in the first half. The Heat’s star center had been outplayed by Boston’s after four games off, getting his legs under him after returning from a knee bone bruise. He landed back-to-back alley-oops to close a first half where the Celtics posted 42 points in the paint, their most over the past 25 seasons, against what had been the best defense in the playoffs in Miami.

Adebayo landed his revenge shot early, pummeling through Grant Williams and scoring after Miami grabbed consecutive offensive rebounds to start the possession. Adebayo had only taken two shots in the first half and the Heat got outscored by 11 points with him on the floor. He only needed one shot to spark a seismic run, 22-2, to start the only quarter Miami won all night, 39-14. It earned the Heat a 118-107 win in Game 2 after trailing by eight at halftime.

“I felt like our energy shifted,” Adebayo quipped after.

Jimmy Butler scored 41 points, his third 40-piece of the playoffs, alongside nine rebounds, five assists, two blocks and four steals, grabbing two in a row to cap the game-changing run by shooting the gap on back-to-back Jayson Tatum passes. Tatum turned the ball over six times in the frame, while the Celtics shot 2-for-15 and committed eight turnovers as a team.

Gabe Vincent, starting for the injured Kyle Lowry for the seventh time this postseason, keyed a halftime adjustment getting underneath Williams III on his post catches. He broke up a pass to the big man early in the third quarter, plays later stepping back far behind the three-point line to bury a three with the shot clock ticking away. Butler tore inside and followed Vincent’s miss on the next possession, and the Heat took the lead and never looked back, Vincent blocking Williams III again on the next possession.

The Celtics began spiraling after Udoka called timeout after Butler’s put back, yelling at Derrick White and Jaylen Brown, before motioning Williams III toward the bench. Brown drove full court into no man’s land and lost the ball and Tatum fed Max Strus for a run-out dunk, Udoka calling another timeout and turning his ire toward the officials. Tatum, citing his three consecutive turnovers that put the Heat up 76-64 midway through the third, took the blame for the loss.

“Just try to regroup, regather and not let it snowball like it did, myself included, I had too many turnovers,” he told CLNS Media. “I’ve got to play better in those situations.”

Boston mustered a 9-0 answer and won the fourth quarter, receiving 18 points and four assists from Payton Pritchard and three blocks from Aaron Nesmith in his first real action since early April. The Celtics found out hours before tip-off that Al Horford entered COVID protocol and that Marcus Smart couldn’t play through his mid-foot sprain. Williams III, back from his knee bone bruise after four games off, would need to ramp up to 28 minutes immediately. After a strong first half, finishing 5-for-5, he faded to six points on 1-for-3 shooting in the second.

Fouling plagued Boston, sending Miami to the free throw line 34 times, including 18 attempts from Butler alone as he caught Celtics defenders with steady usage of his up-fake. Williams picked up a foul in the bonus after a turnover back court, landing himself on the bench in foul trouble and catching Ime Udoka’s ire along the sideline. Tatum did the same, the Celtics never able to rebound through those 12 minutes until they trailed by 20 points in the fourth quarter.

Tyler Herro, who kept the Heat close with 15 points on 7-for-13 shooting in the first half, didn’t step on the court in the third until Miami’s run had already finished.  It happened that quickly.

“I wouldn’t say it’s anything tough to clean up,” Udoka said. “Because we got back to it in the fourth quarter. We did it for three quarters and obviously you make two baskets only and you’re going to get one assist in that quarter, it was just more so the things that we didn’t do, which was making the simple pass. Playing in a crowd and that led to those turnovers. Nothing we can’t clean up. We’ve been doing it for the most part all season, especially second half and the playoffs. It was no different from Milwaukee or Brooklyn or the teams that really load up on those guys, just got caught up in the physicality and tried to draw fouls instead of making the right reads. Obviously Al and Marcus, two of our veteran guys that can kind of calm us down at times, you might miss that some, but it was a little bit of everybody. It wasn’t just young guys, Payton and those guys, it was Jayson and some of our veterans making the same mistakes. So no excuse there.”