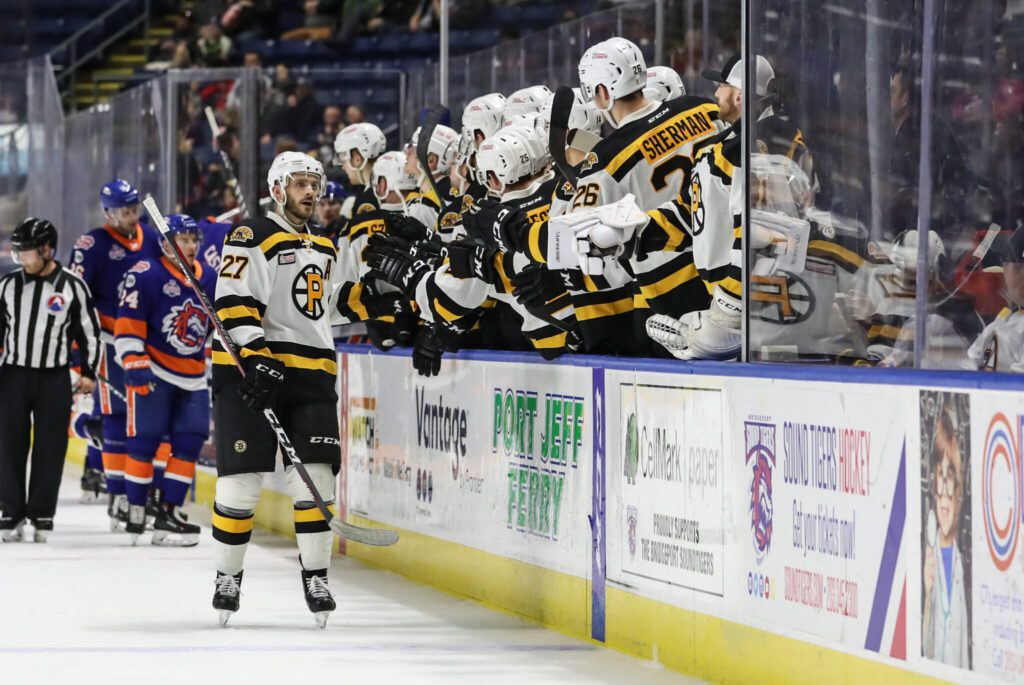 Jack Studnicka was nervous. It was an odd feeling for the Bruins most talked about prospect — he hardly ever experienced nerves before a hockey game.

But this was his first NHL game. And it was in Montreal. If ever there was a recipe for nerves, those would certainly be two ingredients.

What helped ease the moment for Studnicka was the presence of a familiar face — one who wouldn’t even play in the game that night. Brendan Gaunce got the call up to Boston at the same time. This was far from the 26-year-old’s first time making the trip from the AHL to the NHL.

Gaunce picked Studnicka up at his apartment in Providence for the drive to Boston to hop on a flight to head to the rookie’s first NHL game. Once in Montreal, the former first-round pick explained the little things to Studnicka, such as how to figure out if he was in the lineup or not.

“I hadn’t really known him too well, it was only about a month into the season,” Studnicka said of Gaunce in a virtual town hall. “But we spent that whole experience together…Just to have someone like that who’s been through it, who’s been up and down throughout his career really helped.”

This is only a microcosm of the team dynamic that takes place down in Providence.

Like their big brother in Boston, the P-Bruins finished the 2019-20 season atop the Atlantic Division. The talent flourished on the roster, with Studnicka leading the charge on offense, young guns Jakub Zboril and Urho Vaakanainen heading the defensive core and Dan Vladar putting up outstanding numbers in net.

But the most important aspect of the team had nothing to do with wins and losses or goals and assists. It was the veteran leadership — also like their big brother in Boston.

Players like Paul Carey, Alex Petrovic, Steven Kampfer, Brendan Woods and Gaunce looked past their own career goals to help those of the younger, flashier prospects.

“What they did was, and it’s really tricky to do at our level, combine the fact that they still want to get better, they still want to play in the NHL, they obviously have that and we asked them to never lose that,” head coach Jay Leach said in a Zoom call with reporters Monday. “But at the same time, we’re also asking for them to help out these other guys that eventually might take their jobs, so it’s a really tricky situation.”

Paul Carey had a “C” stitched onto his jersey prior to this past season. It’s hard to imagine at the start of his pro hockey career, his goal was to become a captain for an AHL team at age 31.

Nevertheless, he embraced the responsibilities that came with it.

“That was a bit of a challenge this year. Taking on the new leadership role and really starting to take these young guys under my wing was an adjustment I had to make,” Carey said in a Zoom call with reporters Wednesday. “But these young guys make it so easy. They show up to the rink everyday with a ton of passion and they’re eager to learn everything…I just try to help them along and keep an open mind to whatever questions they have and try to teach them through my experiences that I’ve had a long the way.”

Carey has certainly had a plethora of experiences in both leagues. Since finishing up at Boston College in 2011-12, Carey has jumped between the AHL and NHL numerous times.

It’s a quality Leach, as well as the rest of the team, very much appreciate.

“He focuses more on the team and the team success more than anything,” Leach said of Carey. “He kind of lets everything else fall where it may. So, if he’s focusing on team success, he wants everyone to get better.”

Carey finished with 39 points this past season for Providence, which was good for second-best on the team. Still, it seems as though Carey’s days as an NHL star aren’t in front of him. The same can be said for some of the other veteran leaders on the team such as Petrovic, 28, and Kampfer, 31.

Gaunce is 26 and Woods is 27. Neither have had a season where they haven’t shuttled between the AHL and NHL.

“I remember my first day rolling out in the gym, [Gaunce and Woods] really took the time to have a full conversation with me and they were engaged in it and they tried to get to know me because I was the new guy and the rookie,” Studnicka said. “Just everyone: Alex Petrovic, Paul Carey, all the older guys do such a good job at connecting the room where there’s not really older and younger guys — it’s more just a team atmosphere and everyone loved coming to the rink and loved playing together.”

It would be very easy for Gaunce and Woods to have turned a blind eye on prospects like Studnicka. After all, these younger players will most likely take the spots in Boston the veterans have been vying for their entire careers.

Studnicka understands this and certainly appreciates it.

“It means a lot to me,” Carey said of the appreciation from the younger guys and the coaching staff. “Going into this season if you were to tell me that I’d be the captain and I’d be molding these young players to be NHLers some day, I’d say that’s a job that is difficult and something that I’ve never done before but it was a fun challenge.”

It’s a job, and a culture, that’s essential to the long-term success of the entire organization. Players such as Trent Frederic, Jeremy Lauzon and Studnicka look to have long, stable careers in the NHL. The Bruins would like that to take place on TD Garden ice.

And it would be even sweeter for the veterans who helped them get there.

“If I can turn on the TV five years from now and see even a handful of these young players on TV playing in the NHL, then I feel like I did a pretty good job,” Carey said. “I could hang my hat on that a little bit.”