‘I can’t picture it any other way’: Why This Holiday Season Means So Much To Torey Krug 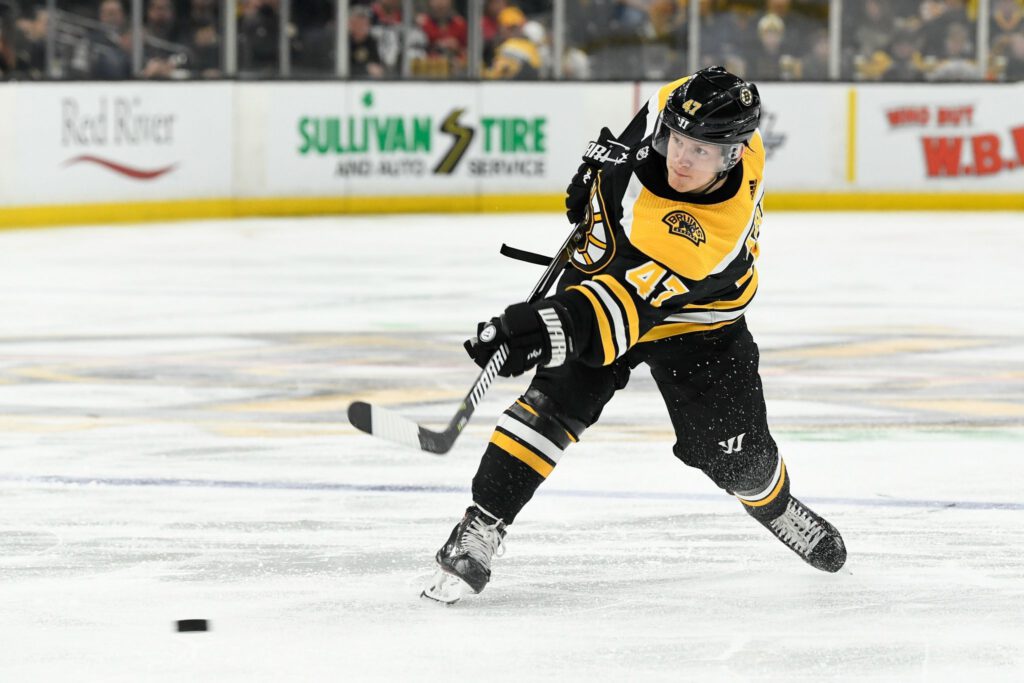 Torey Krug skated over the blue line and entered the neutral zone. It’s a route that No. 47 has become quite accustomed to over his nine-year NHL career.

This time was different than any other. Krug traded in his typical, focused glare and pads for a big smile and street clothes. As he skated around at the Bruins annual family holiday skate, instead of holding his hockey stick, he held his six-month old daughter Saylor Harper in his arms.

She was the source of the smile.

“Just taking her out for a spin, whether it’s for 5-10 minutes holding her on the ice, these are the memories that I’ll have forever,” Krug said.

Krug’s had quite the calendar year. Not only did he help lead his team to the Stanley Cup Final and become one of the league’s top offensive defenseman, he and his wife Melanie also welcomed their first child in June.

With Saylor, it’s been a lot of firsts for the Krugs in 2019 — first month, first Halloween, first Thanksgiving, and so on and so forth. The biggest might be her first Christmas and holiday season. It’s a memorable milestone in a child’s young life and one that family’s everywhere enjoy.

But with Krug in the midst of a rigorous NHL schedule, time at home isn’t guaranteed. The league has no problem scheduling a team to be on the road for the majority of mid-December, which isn’t ideal for players with a wife and kids.

“There’s a lot of years where you have to spend time away from [family] leading up to Christmas or Thanksgiving,” Krug said. “Whatever holiday it is. You spend a lot of time on FaceTime.”

The Bruins won’t have to spend much time on video chat during this holiday season. Their last away game was against Florida on Dec. 14. With all that time in Boston, it gives players much-needed time at home with family.

So much to be thankful for this year. ? ❤️

For Krug, this means he gets to fully experience his daughter’s first Christmas and holiday season.

“Obviously I can’t picture it any other way,” Krug said. “I feel very lucky and blessed to be home for that and enjoy to see the smile not only on my daughter’s face but my wife’s face as well because it’s been a lot of fun to watch them grow together and obviously to be apart of that is special.”

The Krug trio recently bought their Christmas tree at a local parking lot in Allston. They spent Sunday walking around the Boylston and Newbury Street area, immersing themselves in the holiday spirit as a family.

“I just really enjoy the time,” Krug said. “There’s nothing that beats spending time together.”

Like most parents with their first child, Krug and Melanie’s second half of 2019 has been centered around raising Saylor in the best possible way. That’s not always easy with Krug’s high-profile day job.

He calls everyday a “learning experience” when it comes to parenting.

Having a small child at home doesn’t often help with that — especially within the first six months.

“It’s tough managing being tired from being at the rink and playing hockey games and not getting any sleep after games and getting up early and trying to manage that,” Krug said.

A lot of the weight of being a first-year parent is handled by Melanie. With Krug spending so much time at the rink and on road trips, he’s very thankful that Melanie is there to face the numerous daily tasks surrounding Saylor’s first six months.

“I have a great partner with my wife and she does a lot of the tough work and the tough hours,” Krug said. “But she gives me a chance to enjoy those moments when I do have the energy and I can be apart of it. It’s been a learning experience, everyday’s different and just trying to enjoy it everyday.”

Becoming a parent doesn’t seem to be impacting Krug’s on-ice performance. As it stands now, No. 47 is tied for sixth in points among all NHL defensemen with 25. His offensive presence next to Brandon Carlo on the second d-pairing hasn’t wavered since last spring.

This is a big season for Krug. When the campaign comes to a close, the Michigan native will be an unrestricted free agent. He said before the season that he’d be interested in taking less to stay in Boston, which has become a common theme around the B’s dressing room.

Torey Krug on his contract status: “I want to be here” pic.twitter.com/NfgeFuUuK4

The deal will probably be long-term, which means the location, whether Boston or elsewhere, will be the place in which Krug and Melanie raise their family.

No matter the setting, he wants his kids to have been able to watch and understand what their dad did.

“One of the things I really wanted was for my kids to remember me playing,” Krug said. “I know she’s too young right now to grasp that and she won’t remember for a long time. As my career moves on and she gets older, she’ll be able to one day have great memories of coming to the rink and watching her dad play.”

With the future unknown, what’s for sure is that Saylor is six-months old and a bit too young to remember her dad skating around Warrior Ice Arena with her in his arms. She also probably won’t be able to recall going with her father and mother to pick out her first Christmas tree.

But Krug will. He’ll remember that in a schedule as crazy as his, he got close to two weeks at home during the holidays to spend with his small family, fully soaking in his daughter’s first Christmas.

And when it comes to those things, nothing else really matters.