If Bruins Have Bergeron & Krejci Lines Consistently Producing, Hurricanes are in Trouble 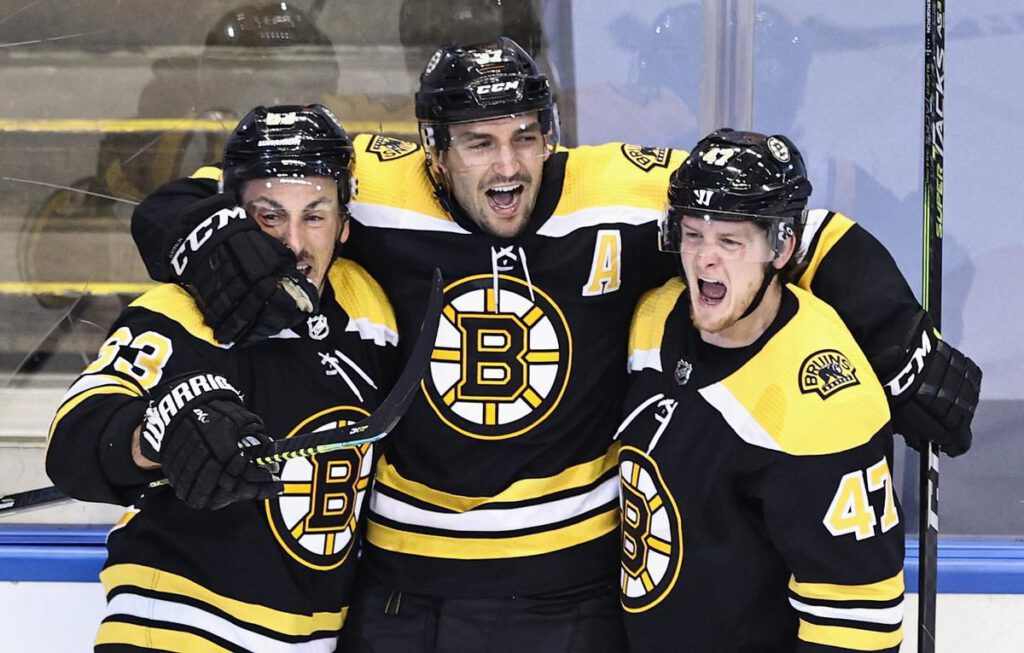 Patrice Bergeron and David Krejci trotted out for their postgame media availability on Zoom together. Bergeron with a cut under his lip and his hair a bit messy and Krejci with a hat on to presumably hide his own moss. Both were grizzled and tired — they’d just completed a game after all.

Hardly anyone ever pairs the two together since they center different lines. Bergeron always gets thought of with Brad Marchand and David Pastrnak. Krejci gets looped in with Jake DeBrusk and anyone and everyone who’s ever played on his right side. By my estimation, that number is nearing 500 people. But the two have been pillars of longevity on the Bruins offensive front. They’ve been card-carrying members of the Boston forward crew for the longest amount of time.

So, in Wednesday’s 4-3 Game 1 victory, the two finally had a reason to be paired together after Krejci gave the B’s the lead early in the third period and Bergeron won it in the second overtime. Even more impactful was the play of both of their lines.

Let’s start with the Krejci line.

“That’s the formula we’d like, I’m not going to lie to you,” Bruce Cassidy said of Krejci’s line. “I’d love to replicate that every night with those guys. Like I said, Kase took a few hits and he bounced back. Really what I liked was the second effort on the pucks. That makes any team hard to play against. That’s what happened with that line tonight.

“I guess if you ask Carolina, they were hard to play against.”

The stats and the eye test support that statement. After being quiet throughout the round robin, the line of Krejci, Jake DeBrusk and Ondrej Kase was dominant Wednesday afternoon. In the offensive zone, they forechecked well and created a multitude of chances, which we’ll get to in a bit. In their own zone, they kept the puck to the perimeter.

Here’s how they stacked up, according to Natural Stat Trick.

The Krejci trio skated most of their shifts at 5v5 against the line of Ryan Dzingel, Vincent Trocheck and Martin Necas. They kept the Hurricanes’ second line at bay for most of the game, limiting them to only 10 shot attempts and an xGF of 0.24.

What stood out most for this line was the connection between Krejci and Kase. Even though it was only Kase’s second game in the bubble, the two linemates found each other on a bunch of occasions.

Krejci scored the only goal for the line in Game 1. However, it was his playmaking ability that stood out the most.

Take this play with DeBrusk here.

Krejci took the puck to space, drew two Hurricanes defenders, sauced it over to more open space and let DeBrusk skate to it. Had Morgan Geekie not backchecked as hard, it would’ve been No. 46’s second goal of the game. It’s plays like that that are a sign the Bruins’ most potent offensive outbursts are still to come.

On the topic of scoring, DeBrusk missed an open net and hit a post. He broke his stick out of frustration when he got back to the bench after missing the wide — and I mean wide — open net.

As bad as those missed opportunities were, the good thing for the Bruins is they’re there. DeBrusk had 27 goals a year ago and if the regular season played out this past spring, he would’ve hit 20 goals. As inconsistent as No. 74 can be at times, he’s going to start finding the back of the net with those chances.

It’s also proof the second line is working, which is a great sign for the Bruins.

When it came to the Bergeron line, they had a much different task.

Along with scoring, a large part of their responsibility was shutting down the line of Andrei Svechnikov, Sebastian Aho and Teuvo Teravainen. That line torched the Rangers in the qualifying round and heading into this series, many expected the trio to have similar results.

Through one game, that isn’t the case. Here were their stats after playing most of their 5v5 minutes against Bergeron, Marchand and Pastrnak.

With the help of some shifts against them from the Kuraly line, the Bergeron line successfully neutralized Carolina’s best.

“We’ve got a lot of trust in those guys,” Cassidy said of Bergeron, Marchand and Pastrnak.

The trio had some difficulties through the first three round robin games, as only Bergeron was able to earn a point. For the rest of the time, the line was held scoreless.

Wednesday was much different. It was classic Marchand-Bergeron-Pastrnak producing in different ways.

David Pastrnak’s goal to open the scoring came off a set play after an offensive zone draw. Marchand lined up on his off-wing, took the won draw, curled with it towards the net and fired it to Pastrnak who somehow managed to get off a one-timer while skating backwards.

They’ve done it a bunch of times before and the ‘Canes knew it — Jaccob Slavin covered and followed Pastrnak to the spot he knew he was headed for. He was just a step too slow.

In double overtime, it was the trip through the neutral zone and zone entry of Pastrnak and Marchand that made Bergeron’s goal happen. Even sweeter for them: they did it against the Aho line.

“We were confident,” Bergeron said of his line. “We’re a confident group, confident line. I think we got better as we went on in the round robin. Obviously you want more, you want to keep getting better and taking the next step, especially we thought that tonight was a really important game, starting round one, so we had to put whatever was behind us in the past and get some rhythm going.”

Ultimately, the Bruins having their top two lines going on all cylinders isn’t just good — it’s imperative to beating this Hurricanes team quickly.

It’s not just Bergeron and his line or just Krejci and his line. It’s both of them together, which means now there’s finally a reason to pair them.

That also means there’s a reason to fear this Bruins team once again.