Are the Bengals relying too much on their demonstrated skill to improvise? 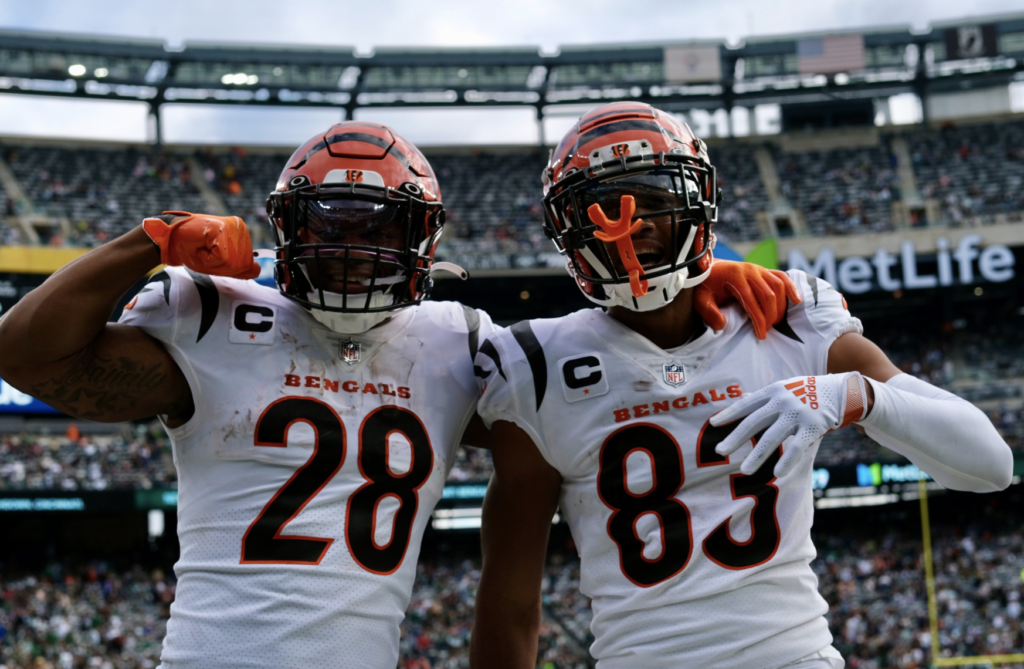 CINCINNATI – Going off script is starting to define the essence of these 2021 Bengals.

From their franchise quarterback running around (sometimes to extend a play and sometimes to scramble for his well-being) to receivers breaking off routes to run with their quarterback long enough for him to find them to three captains deciding to mix things up with the media postgame following a collapse at MetLife Stadium, the 2021 Bengals are mastering what it means to break with the plan and vamp long enough to find the right answer.

That’s not to say there isn’t substantial value in designing a well-conceived plan and sticking to it as much as possible. Certainly, most coaches would tell you that if you have to improvise too much, your preparations are desperately lacking.

But in football today, so much of the story is told by how well you handle adversity when structure breaks down around you.

The most obvious examples revolve around Joe Burrow and his ability to extend plays and the football sense of his wide receivers to follow him when he breaks out of the pocket because protections have broken down.

This is an area that the Bengals have mastered. Sometimes it’s obviously, like last Sunday when Burrow threw a touchdown to Ja’Marr Chase on the run toward the front pylon. Or when Burrow found Tyler Boyd in the end zone on a run to his right.

Sometimes, it’s more subtle, like when Burrow in the second quarter against the Jets, rolled to his right and turned back to his left and had a rusher in his face. He made a throw to Boyd for a first down on a toss that Zac Taylor termed Burrow’s best throw of the game.

What the Bengals have in Joe Burrow is a quarterback who can improvise like a 10-year vet. He’s starting to see plays before they happen, a fundamental priority when deciding to break off a play and do what you need to do to make the play work.

“That’s been a big part of our offense the last couple of weeks,” Burrow told me. “It’s less practicing it and more of talking about it over and over again. Guys like Ja’Marr we have done it over and over again. We scored a couple touchdowns by doing that this year. Then I think guys like TB who haven’t done that much in the past then see Ja’Marr catch a couple of touchdowns, he’s like, ‘Hey, I want a couple of those touchdowns and big plays in that situation.’

“I think TB has really made the most strides in that area. His route’s not open then he sees me break the pocket and his scramble reaction happens a lot faster. It’s nice to see that progression from guys like that and we are just going to keep getting better at it.”

Not surprisingly, the head coach has a slightly different take and perspective on what exactly it means to run off-script.

“There are certainly moments over the course of the season in practice where you maybe pencil one in to extend it,” Zac Taylor said. “You only get so many reps so you want the clean rep often times. That’s one thing I think Joe Burrow does a great job of is moving in the pocket. He understands what it’s going to look like on game day. You’re not just going to drop back on a three-step drop, and be able to take one hitch and it be a clean pocket throw. Often times you are going to have to maneuver. He does a great job of that in routes on air, in group install and he does it in time periods as well as any quarterback I’ve ever seen.

Taylor and offensive coordinator Brian Callahan have probably watched Burrow run more plays off-script than they would prefer this year but that’s what makes Burrow special. He can make sense in the midst of chaos, and an interior offensive line that’s had its issues in pass protection.

“Then when you get that one rep a week in practice where you have to extend it you have to make the most of it and teach off that in drills,” Taylor continued. “There have been years where we’ve emphasized scramble drill on Fridays and we’ve been a bad scramble team. This year we’ve taken that drill out and now we’re a better scramble team so you make sense of it. It’s up to Joe to continue to preach to those receivers and skills guys where he wants them to be on the move. TB had two huge plays in the game last week: the touchdown and in that last drive of the game where he got to the 50-yard line.”

“Those were two huge plays TB made,” Taylor said of Tyler Boyd’s effort in the fourth quarter against the Jets. “Tee (Higgins) had one the week before where he got in phase, it was like an eight-yard completion in Baltimore, and it was still a great job. C.J. (Uzomah) had one for a TD against Jacksonville. All of those guys are feeding off kind of what the standard Joe has brought to the group and done a really nice job being where he wants them to be.”

While running plays off-script is a necessary part of the game plan this year, what the three captains did on Sunday after the hideous loss to the Jets was quite unexpected. But Joe Mixon, Tyler Boyd and Jessie Bates showed a spontaneity that was genuine and heartfelt. You got the feeling listening to them that the loss to an inferior team hurt their pride but deepened their resolve.

Out of the blue, the rest of the team got the sense that winning and losing matters deeply to a group of leaders that believes this team is capable of much more than was expected from outside observers.

“It says a lot about the guys we have in the locker room,” Jonah Williams told me. “We have guys from all walks of life that are at different stages of their careers and different levels of players. But at the end of the day, I think we work together well as a team.

The players weren’t the only ones taking close note.

“I just saw Jessie and Joe Mixon and Tyler Boyd all go to the podium as a group,” defensive coordinator Lou Anarumo added. “I think that tells you a little bit about these guys from an accountability standpoint. Nobody wants to go out there and make errors, nobody me included. And, and these guys are a group that’s full of pride and wanting to do well for each other. So, I think we had a combination of both today, guys, looking forward and learning from this one, you know, you can’t just say, hey, let’s just move on, you know, you got to learn from it. Correct what we made error on and then put all our focus on (Cleveland). (The focus) is squarely on the divisional game against the Browns.”

The Bengals would like to stick to the script Sunday and follow a game plan that bottles up Nick Chubb like they have with Najee Harris, Dalvin Cook and David Montgomery and handles Cleveland’s screen game with tight end Austin Hooper and David Njoku. They’d like to plan for Joe Burrow to find Ja’Marr Chase 10 times for 170 yards and three touchdowns. They’d like to score early and dictate the terms against a Browns team that struggles when behind.

But when the game hasn’t gone according to plan (like trailing Jacksonville 14-0 at the half), the Bengals have been able to wing it. They would just prefer sticking to the script for once.