In 27-10 Domination of Bills, Bengals Prove They’re ‘Built’ For Another Super Bowl Run 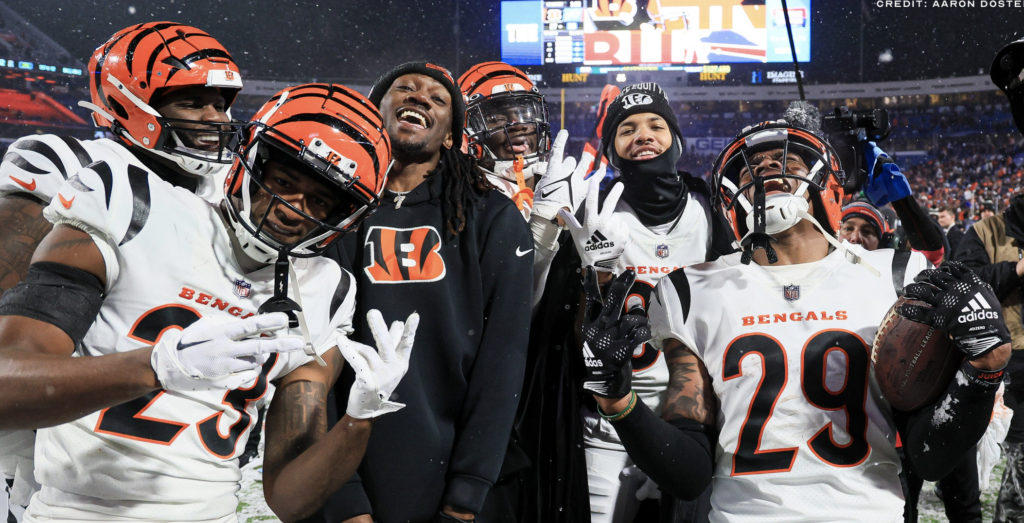 ORCHARD PARK, N.Y. – Some teams just have that look of a champion.

These Bengals to a man felt like a champion team even when they were 0-2, 2-3 and 4-4. They never doubted they were capable of dismantling another Super Bowl-caliber team like they did on the road, in the snow of Orchard Park Sunday.

But on Sunday, the Bengals had that unmistakable presence of a champion. They were equal parts cocky, self-assured and brutally efficient. The Bengals are still two wins away from their ultimate prize in Arizona but Sunday served notice that the Bengals consider themselves the favorite now, even if no one else will.

Head coach Zac Taylor had that smile after the game that comes with coaching a team that has the utmost confidence in itself.

Full team effort. Let's run it back on Sunday.

There was Eli Apple smoking a cigar, talking about his defensive coordinator Lou Anarumo as a “mad scientist.” There was Tyler Boyd and Ja’Marr Chase talking about how disrespected the Bengals felt by the NFL promoting to Bills fans the chance to buy tickets for an AFC title game in Atlanta that won’t happen.

The 27-10 win over the Bills Sunday in the AFC Divisional round will open eyes around the NFL and the nation that they are perhaps the best team left in the playoffs, even if they have to go to Kansas City and prove it one more time.

More on the geography motivation provided by the NFL in a bit.

The Bengals proved to everyone Sunday that they’re not just a legitimate Super Bowl contender. They might just be the best all-around team left in the tournament.

The first betting lines opened Sunday night with the Bengals being an even bet to a 1.5-point underdog in the rematch in Kansas City next Sunday night at 6:30 p.m. ET.

“We’re built for this,” Bengals head motivator and coach Zac Taylor said. “It doesn’t matter what anybody thinks about us. We don’t care who’s favored, who’s not. We’re go for this. And we’re excited to go on the road again.”

The Bengals were 6.5-point underdogs Sunday in Buffalo against a Bills team that had all sorts of motivation of its own going.

They also had Josh Allen, Stefon Diggs, Gabriel Davis and Damar Hamlin cheering from a suite and cheering on the fans.

But these Bengals embrace everything about the NFL playoff challenge.

The best way to silence a crowd is to take the opening drive and march down the field and score. Check. Get the home team’s potent offense off the field on a three-and-out. Check.

Take the next possession, drive down the field, score another touchdown and have your franchise quarterback play perfect football in the process to keep Bills Mafia silent. Check.

The Bengals dominated the Bills in a manner that no other team did this year.

Remember Opening Night in LA when the defending Rams were blown out by these Bills at SoFi Stadium? Remember how unbeatable they looked the next week in ripping through Tennessee?

The Bengals were 0-2 and the difference between the two seemed as wide as the Grand Canyon that will be featured in the Super Bowl in three weeks.

That was all irrelevant to a Bengals team that has played the entire postseason with a chip on its shoulder, a chip that came from the NFL’s arbitrary decision to use a coin flip to decide home field advantage had the Bengals lost to the Ravens in the season finale, even though the Bengals already had clinched the AFC North.

That chip was made bigger this week when it was announced that the NFL was putting tickets on sale for the neutral site AFC Championship game in Atlanta if the Bills beat the Bengals. Bills-Chiefs would take place in Atlanta. But the Bengals ruined those plans and used it as their battle cry going into and coming off the field Sunday.

“Everyone is counting us out,” said Hayden Hurst, who caught Joe Burrow’s second touchdown of the first quarter. “They’re selling tickets to a game that doesn’t exist. We’re minus-6. It doesn’t matter. When you got that guy at quarterback it doesn’t matter.”

Yeah, about him. Joe Burrow looked like Tom Brady Sunday. From start to finish, it was a game I had seen countless times in Buffalo when I covered the Patriots. The upstart Bills were ready to step up and challenge the Patriots in the AFC East with a “statement game” against Brady in Orchard Park.

Except Brady never cooperated. That’s what Sunday was. Burrow was not about to cooperate with the narrative that the Bills were destiny’s team. With the snow falling and Damar Hamlin back in the building, Burrow was in Buffalo to do a job: Get the Bengals one step closer to returning to the Super Bowl and winning it for the first time.

Burrow was razor sharp and laser focused on the first two drives. His first nine passes were completed for 105 yards and two touchdowns. He looked like Brady. And on Sunday, he won like Brady.

“We had a great game plan, guys were making plays and protection was holding up,” Burrow said. “We were running the ball well. Just a complete game like I said. Not much to say about that one.”

“Joe started 9-for-9 in the sleet,” Ted Karras added. “What more could you ask for?”

“Our guys believe they walk on the field ready to attack,” Taylor said. “And so, we were taking the ball whether we won the toss or not. We lost. They won the coin toss. However you want to look at it. Those guys want to walk on the field, start attacking other teams.”

All you need to know about the second half was how the Bills and Bengals handled their first drives of the second half. The Bills drove to the Cincinnati 7 and couldn’t punch in a touchdown and settled for a field goal that made it 17-10.

The common thinking in New England was always, ‘You’re not going to beat Tom Brady with red zone field goals.’ That was precisely my feeling when Joe Burrow started driving the field when the Bengals got the ball back with their lead down to seven, 17-10.

Burrow drove the field and Joe Mixon punched it in from one yard out to go up 24-10 with just under two minutes left in the third quarter. The game felt over at that point. The Bills settled for three and a one-score game. The Bengals answered with a 12-play, 75-yard drive that consumed six minutes, 25 seconds of the third quarter. Just a killer drive.

“You’ve just got to take away their momentum,” Taylor told me. “We’re playing great teams right now. You’ve got to be able to weather the storm. They’re going to make plays, score points. Our defense has picked us up every step of the way. It’s on the offense to score points, turn the tide and regain the momentum so our defense can catch their breath and go out and get a stop like they did.”

The Bengals played their best all-around game Sunday in the perfect spot. Nothing is guaranteed next week going into Kansas City. But the expectations have been raised with their performance Sunday.

That’s a good thing for a team that won’t be satisfied until the Vince Lombardi Trophy resides in Cincinnati.