In Halak, Sweeney Retains Best Signing and one of the Most Valuable Bruins 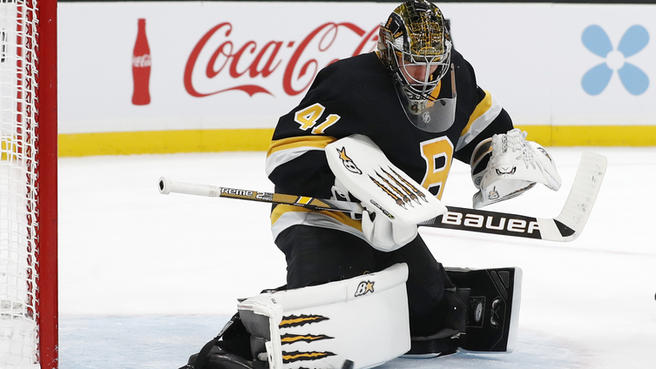 If you asked the average NHL fan who the most valuable player was on the Boston Bruins, the most probable answer would be Patrice Bergeron. Then there’d be those who say David Pastrnak or Tuukka Rask. A few might still go with Zdeno Chara and because of his potential, a select few may exclaim Charlie McAvoy.

Not many would opt for Jaroslav Halak.

While most NHL teams can’t claim their backup goalie as one of their most valuable players, the Bruins can. Granted, some teams can relate to this more than ever before due to a shift in viewing the role of the starting goalie position. But, even with that, there still aren’t many clubs with that case.

Which makes it a bit odd to say Halak isn’t just one of general manager Don Sweeney’s best signings — he’s easily one of the most valuable players on the Bruins.

The value of Halak comes in many forms. For one, his contract is more than palatable. The extension announced Friday — one year, $2.25 million — is another prime example of Sweeney re-signing his guys to hometown discounts. It’s a clear win-win for both sides.

“It was a long process in terms of finding some common ground,” Sweeney said to the media Saturday morning. “You can see that Jaro and Allan Walsh worked hard with us to be a little creative and to allow us some flexibility.”

Halak’s first contract with the Bruins barely raised any eyebrows. Back in the offseason of 2018, the B’s knew then-backup goalie Anton Khudobin was due for a significant bump in pay. He was only bringing in $1.2 million per season and after his 2017-18 campaign, the lovable netminder was a free agent. The Dallas Stars scooped him up at a cap hit of $2.5 million per year.

Khudobin played well behind Tuukka Rask, starting 29 games and winning 16 in 2017-18. The Bruins wanted to continue the trend of a capable backup, which is why they opted to give a two-year deal with an average annual value of $2.75 million to former starter Halak.

That’s around when the organization started to favor the two-goalie tandem.

“We’ve done a lot of internal studies, as well as outside ones, to try and figure out a balance,” Sweeney said Saturday. “What works best for each individual? We’ve been in a position now where Rask in the last couple of years has been well-rested, has been able to go on runs, but we’ve leaned on the backup goaltender much more regularly in the last few years. Anton Khudobin did a very good job in that regard as well.”

There’s enough value in Halak’s statistics since joining the Bruins alone to warrant his initial contract and the extension. Among all NHL goalies who’ve played at least 3,000 minutes since the start of 2018-19, here’s how his numbers fair.

Those are elite numbers. A large reason for that is due to only playing in 71 games over the past two seasons — a lot for a backup but not too many for a starter, which leads to the biggest point.

Bruce Cassidy has always referred to the platoon in net as a 1A and 1B scenario, emphasizing Rask as the main guy but Halak there as a crutch for when No. 40 needs rest.

That is the most valuable aspect of Halak on the Bruins.

“Jaro the last couple of years really established himself as being a go-to guy in any situation,” Sweeney said. “Rask has gone through a couple injuries at different times and Jaro’s been able to step forward. It’s good balance for a hockey club. You feel very comfortable, Bruce [Cassidy] feels comfortable no matter who’s starting on what night, road, home, opponent. I think it gives us a lot more flexibility.”

It’s well-documented that Rask is at his best and makes the longest postseason runs when he plays less during the regular season. His two trips to the Stanley Cup Final as a starter came in the lockout-shortened 2013 season and in 2019 when he only started 45 games. Even in 2013-2014, his lone Vezina trophy campaign, he started 58 games — his least amount of starts in a season until 2017-18.

Throughout last season, some argued Halak should be named the permanent starter. When the Winter Classic rolled around, many advocated for Halak to start. Halak finished the regular season with a better goals against average and save percentage. Some thought No. 41 should get the nod for Game 1 of the first round.

Through it all, Rask kept his eye on what Halak’s playing time really meant: rest to be fresh for the postseason.

“No,” Sweeney said when asked if he was ever worried about Rask’s response to less playing time. “Not a concern at all. Over the course of my time here as general manager, I’ve had several conversations with Tuukka on his own preparation and what’s best for his continued success at the level of play that we’ve been accustomed to here. I think he welcomed that.

“We made a decision a few years ago to adopt this philosophy and Tuukka was fully on board. He’s felt good as a result of it, he’s played well as a result of it. A testament to him and to Jaro for responding to situations they’ve been put in.”

It’s more probable than not Rask doesn’t have the postseason he had in 2019 — .934 save percentage, 2.02 goals against average — without Halak taking as many starts as he did during that regular season.

Now Halak has signed on for at least one more year, proving the Bruins want to use their league-best goaltending tandem to propel them to another Stanley Cup appearance. This time they hope to win.