In leading his team to a thrilling 141-133 2OT win, Jayson Tatum makes it clear that these are his Celtics 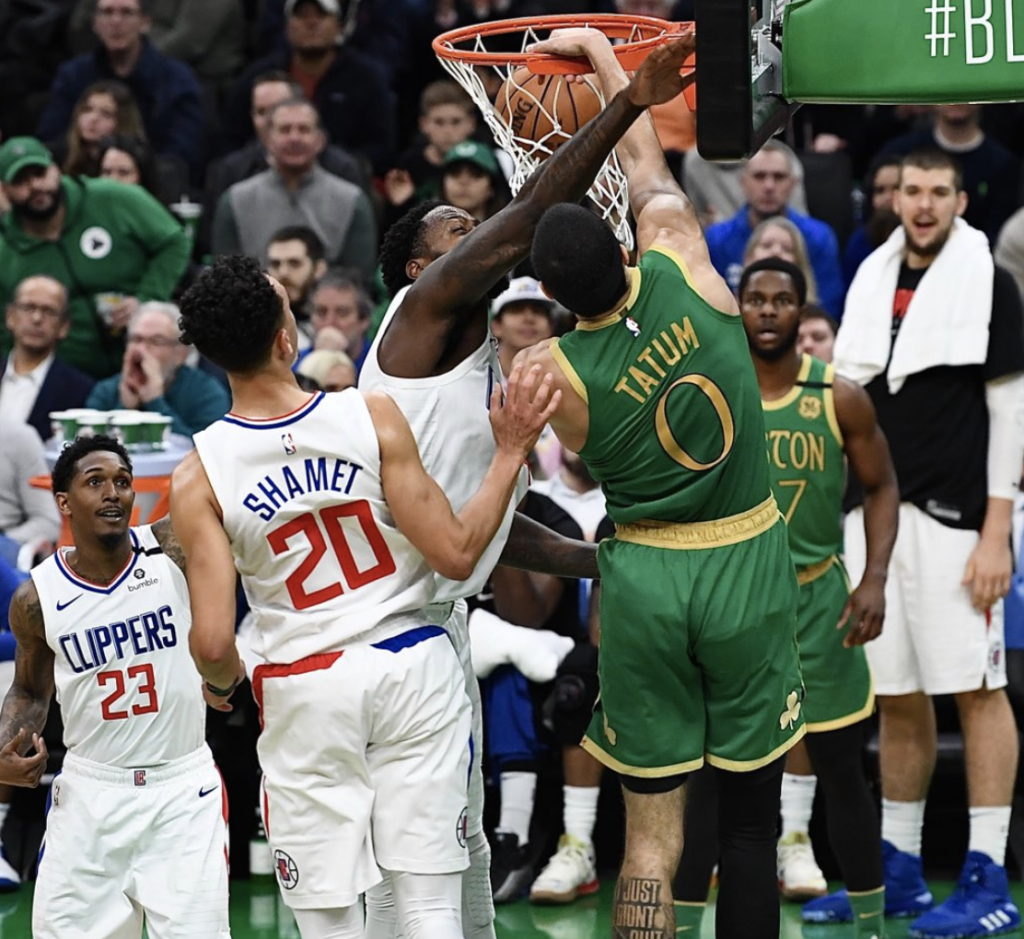 BOSTON – With the Clippers making a run at the end of the third quarter, Jayson Tatum took over as only he can.

He drove into a space under the basket cleared out by rookie Grant Williams and threw down a monstrous one-hand dunk with 32.6 seconds left to increase Boston’s lead to four. When Lou Williams answered that dunk with a three, Tatum was not about to be outdone. He found his spot on the left side and put a side-step move and drained a three of his own with 6.8 seconds left in the quarter. That five-point explosion lit up the Garden and propelled the Celtics into the fourth quarter with a 91-87 lead.

With Jaylen Brown sidelined with a bruised left calf, it was again up to the 21-year-old to take over. And he most certainly did. The third-year pro finished with a game-high 39 points and nine rebounds. He made it clear Thursday night in the final game before the All-Star break, this is his team.

THROW IT DOWN JT!!! pic.twitter.com/xnR2SQx6aW

Yes, the Celtics still have Marcus Smart as their inspirational leader and general. And yes, Kemba Walker offers a steady hand of a veteran at point guard. But there is no doubting who their go-to guy is. It’s the third-year star out of Duke. In 50 games this season, he’s averaging 22.4 points and 6.9 rebounds in 34 minutes a game.

He didn’t make every clutch shot, missing one at the end of the first overtime that would’ve won the game at the buzzer. But he kept delivering in the second overtime and showed the stamina of a kid who is just hitting his stride in the league.

In the fourth quarter alone, he blocked a shot, drove the length of the court for another prodigious slam, just moments after he getting called for a technical foul because he was called for a traveling violation.

With 2:23 left in regulation, he hit a three that put the Celtics up, 112-109. With the Celtics protecting a 112-111 lead with 1:35 left, and Leonard chasing him all over, he ran to a spot on the right side and drained a 14-footer with just enough space to get the shot airborne. Big shot after big play after big shot.

“He wants the challenge,” Brad Stevens said. “I mean nobody respects Kawhi more than Jayson and appreciates him more than Jayson. He is going to play his heart out against him on both ends of the court because he knows if you don’t you get embarrassed pretty easily. I thought he did a really good job. You just try and make those shots as tough as possible. When Jayson is able to challenge shots his length is a factor. He did that on a lot of occasions and Kawhi still hit a few, as did the other guys. He played a good two-way game and has been a good two-way player all year. I think that is what makes us feel really comfortable. He was playing at an all-star level on both ends of the court.”

There were many other big moments in the final 22 minutes as the Celtics found a way to pull away for a 141-133 double-overtime win against the Clippers at TD Garden in the final performance before his All-Star Game debut this weekend in Chicago.

“That was an extremely fun game to play in,” Tatum said. “Both teams played really well. It feels good to get a win going to the All- Star break, get some time off. Yeah, a lot of guys on our team played well, guys came off the bench. It was a great game. It was a lot of fun playing.”

Tatum scored 39 points against Kawhi Leonard, one of the best defenders in the NBA. He defended Leonard, holding him to 10-of-27 from the field and 25 points.

“Just the fact that he had to play against one of the league’s best players and he met a great challenge with it,” Stevens told me. “Obviously, I thought both teams just played so hard and both teams looked spent at the end. We were just fortunate to come up with enough balls at the end to win the game. Quite a job by a lot of different guys in both locker rooms. Jayson obviously was terrific tonight.”

“Oh yeah it’s definitely a challenge,” Tatum said of the Kawhi matchup. “You know, a guy I watch film on a lot, I have been watching film of him since I was in high school. Obviously, he’s one of the best players in the league, probably top two, top three players, so you know you want those ones, just to compete against a guy like that who has accomplished so much in this league, just try to make it tough. Capable of making shots and any shot you can get, so it’s just a team effort to try to make it as tough as possible and that’s what we do.”

It was a Tatum tour de force.

“He’s been great,” said Gordon Hayward, who scored 21 points on 6-of-21 shooting. “He really put us on his back tonight, especially when some of us had an off-shooting night, so he’s been tremendous out here. We need to keep him playing like that.”

So, exactly where are the Celtics following Thursday’s win over the Clippers at TD Garden? More importantly, what are the expectations of this group?

Their 38-16 record indicates they’re a very solid No. 3 team in the East, just behind the defending champion Raptors and well off the pace of the runaway Milwaukee Bucks at the top of the conference.

Then there’s the West. They’ve blown out the Lakers by 32 points, a team that sits firmly atop the conference. They handled the Nuggets with ease on Dec. 7 at TD Garden. And they added the Clippers to their list of recent victims.

“Well if you want to be a good team you have to beat other good teams,” Stevens said. “If you want to be a champion you have to beat them four times in two weeks. I’d say very little significance, but we will take it. We will move on and try and be as good as we can be when that time comes. That is the bottom line but you have to prove that you can do it. There is a lot we can work on and I am sure they don’t feel like they played their best. (Paul) George leaves at half time and Patrick Beverly doesn’t play. I think we are realistic that we have a lot to work on and that is a good thing. I think our guys are embracing that.”

They played Thursday without Brown. This Celtics team has shown time and time again this season that they’re able to pick up the slack, even when multiple starters miss time.

“This team has got a good fight, has good toughness and that has been really fun,” Stevens said of the recent gauntlet through the West. “This last six weeks has been really hard from the standpoint of starting and we have talked about it a lot. Not having more than one day off in the last six weeks between games and to finish it off with eight of nine going into the break is a good thing. Now, when we come back from the break and take a deep breath you have to bring the same competitive spirit back to the road trip.”

There aren’t many teams that can turn to a 21-year-old star to steady the ship. But that’s what the Celtics have in Jayson Tatum. And Thursday was the latest chapter in a story that has just begun to be written.

Remembering the Life and Legacy of Bill Russell