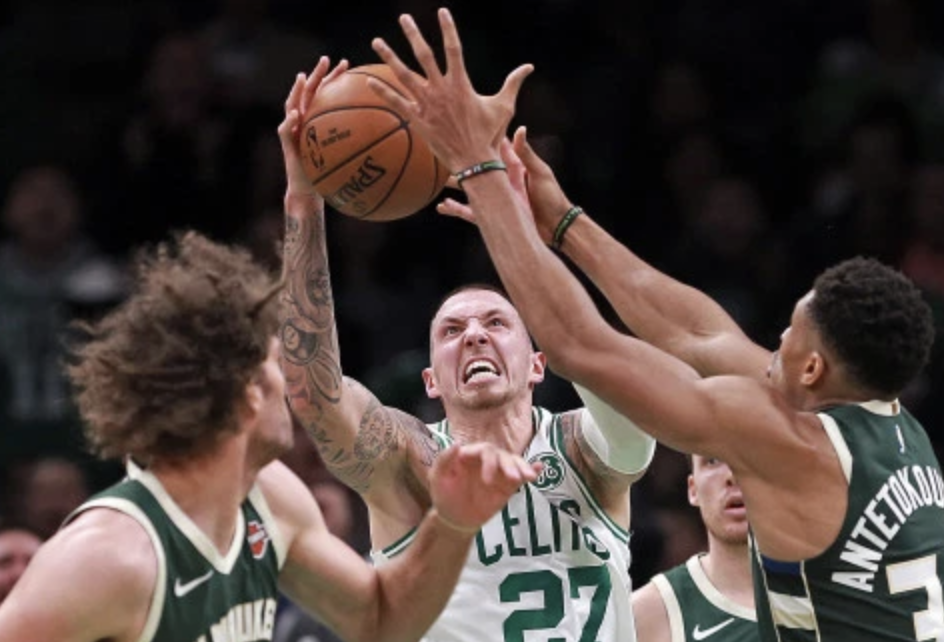 BOSTON — Across the locker room, the Celtics shared the same sentiment after perhaps the team’s greatest win since their last East Finals trip. They couldn’t let the offense affect their defense. Getting stagnate offensively, as Hayward put it, leaks into the defense. Defensive energy, on the other hand, fed the offense. That flipped the first half into the second in a 116-105 win.

Kemba Walker: “(Marcus Smart’s) just a tough guy. He never shies away from the moment.”

Kemba Walker broke out for 32 points, most coming in the closing sequence of a comeback that turned into a blowout win over the Bucks. He saved the largest praise for Marcus Smart, who he saw hit big shots in the games the Hornets and Celtics once faced off in. Now, he earned the benefit of a 5-for-11 three-point performance from Smart. “I’m happy he’s my teammate.”

Marcus Smart: “When they get a lead like that, they keep it. It was just one of those nights where we had to dig deep down inside ourselves.”

If Smart can shoot, he’s going to shoot. That continues to be his approach in his sixth season, shooting a career-high 7.5 threes per game to drive his career high 11.3 points per game. He said the Celtics’ 19-point comeback reminded him of the runs earlier in his career.

Gordon Hayward: “I wish we could put two halves together.”

“If they’re going to be pulling back, stepping into a nice open jump shot, that’s something I’ve been doing for years.” Hayward’s mixed up his shot selection at all three layers, hitting a steady diet from mid-range to give himself space to drive to the lane later during the Celtics’ comeback. Despite the 74-47 half, Hayward still worried about the Celtics’ first half, “that in-between zone is what was affecting us in the first.”

Tatum loved Paul Pierce’s sideline presence. They talked before the game, then as Pierce urged him for a high-five during the Celtics’ comeback it crafted an iconic photo. One era of Celtics basketball passing the torch to the next.

Brad Stevens: “We were just trying to hit it out of the park every time we shot. Finally we settled down and just started hitting singles.”

Despite wins over the Raptors and Bucks, along with a 3-1 start, Stevens hasn’t learned much in regard to how good the Celtics are yet. Boston picked its poison defensively in the second half, he heard the right things in the locker room at halftime and he saw the group settle down. “Sometimes you have to hit singles to get back because you hit home runs to get down.”