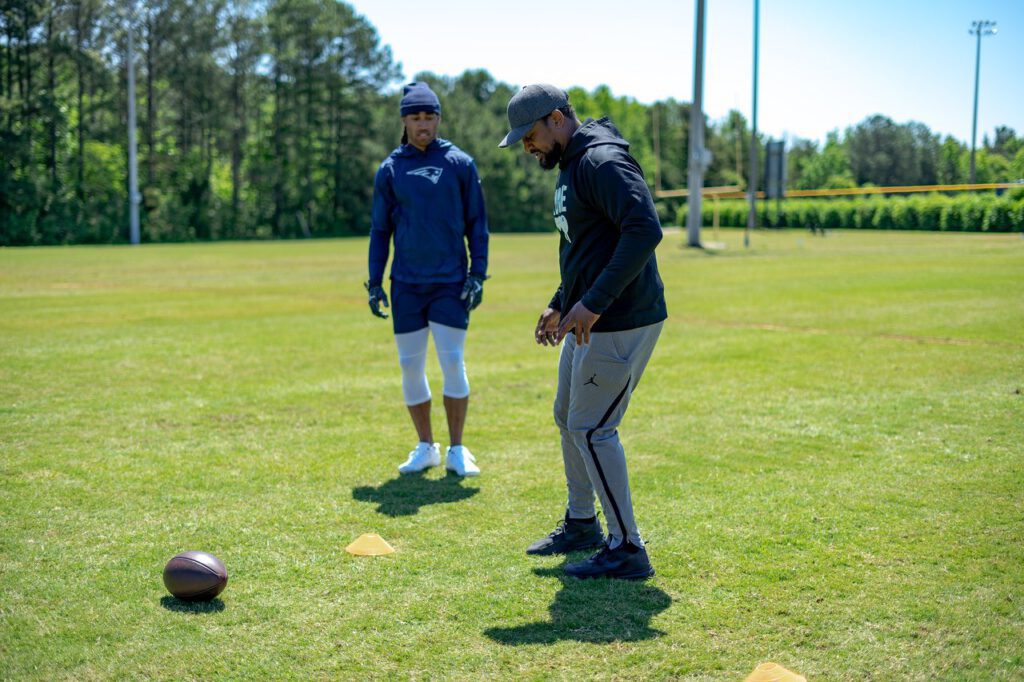 Patriots cornerback Stephon Gilmore is in an enlightened stage of his career, where he’s physically and mentally in his prime.

Gilmore was the total package when the Bills selected him tenth overall in the 2012 draft: good size, speed, agility, and physicality at the cornerback position.

But something was missing in Buffalo that Chan Gailey, Doug Marrone, and Rex Ryan couldn’t unearth as Bill Belichick has in New England.

Due in part to constant change with Buffalo’s coaching staff, Gilmore lacked the instincts and attention to detail necessary to be great. But that has become a strength with the Patriots, and Gilmore is thriving, coming off of consecutive first-team All-Pro nods and Defensive Player of the Year in 2019.

“That’s where Stephon is right now. Like older basketball players, like MJ and Kobe, they were much smarter than everyone else. They were more effective as they got older,” said Gilmore’s longtime trainer and former NFL cornerback Dré Bly in an exclusive interview with CLNS Media.

“Every chance I got to see him play, and this was the same for me as I got older, how much knowledge and how much smarter I was able to get. Just watching Stephon understand splits of the receivers and what you’re going to get, how they’re going to approach you.”

“That’s the difference now for Stephon as an older player, coming off of Defensive Player of the Year, he’s so much smarter and has so much knowledge of the game.”

Here’s a great example of Gilmore’s high football IQ at work. As he tells NFL Network’s Brian Baldinger in the clip above, Gilmore is matched up in the slot with Dolphins wideout DeVante Parker. Based on Parker’s release and slot alignment, the Pats corner anticipates Parker’s crossing route. Gilmore is free to take an aggressive approach because safety Devin McCourty is providing help over the top. Gilmore breaks early on the crosser, undercuts it, and tips the ball to McCourty for an interception.

Bly, who coaches at the University of North Carolina along with his private training sessions with Gilmore, helps the Pats corner stay sharp in the offseason.

“My time that I get away from coaching is valuable, but me and Stephon have established a bond for three or four years where it’s only directed towards him. It’s just him and me out there,” Bly said.

It’s not by mistake Tht @Patriots @BumpNrunGilm0re was the #NFL’s #DPOY last year! This Dude loves Ball! He will pick your mind about the game/position and he will ask a lot questions! Then he perfects his craft and execute the plan! #formula to being the Best! Take Notes! pic.twitter.com/TyO3Mj3zDK

“We’ll do real [game]-like movements, so we’ll do a bail drill where you’re bailing. We might do a two-read drill where you’re shuffling out and visualizing the receiver and the quarterback. Then you do different angles of breaking.”

Bly also explained that he prefers to do defensive back drills with a ball involved saying, “we got a ball in every drill, which I think not enough DB coaches do because of the pace and time they have. Every drill we do, I do with a ball.”

The one technical area of Gilmore’s game that has Bly’s fingerprints all over it is the Patriots’ cornerbacks emphasis on staying square at the line of scrimmage in press coverage.

Gilmore and Cooper come in motion at the bottom of the screen. #Cowboys run play-action with Cooper running a comeback, a route he separates on regularly. Gilmore plays soft press here and mirrors Cooper’s route. Body control is insane to stick while staying over the top. pic.twitter.com/G0TJHu83Lf

“That’s the one thing we drill and emphasize. A lot of guys get in trouble when they don’t stay square, they open the gate, they’re crossing over,” Bly said.

Bottom of the screen again. Gilmore’s patience at the line is unmatched. He doesn’t fall for any of Cooper’s fakes and stays square until Cooper makes a move. Runs him into the sideline. Dak forced to scramble and gets tackled well short of the sticks. #Patriots pic.twitter.com/65kGu5bkJd

“Stephon has done a really good job at staying square, not really opening the gate. When you’re staying square and working laterally with your feet, if you keep your hands on him, you can reroute him and disrupt timing by staying square in your angle.”

“There are three phases to being a good corner: you have to have good feet and hands, they all tie together, and then after that its angles. What comes with good feet and angles is all about staying square.”

During his 12-year career, Bly played two seasons alongside Hall of Fame cornerback Champ Bailey in Denver, who Bly says was very similar to Gilmore.

“He’s very similar to what Champ [Bailey] was. Very similar personalities. Champ was never too big for his own good. He never was too cocky, too arrogant, he wasn’t one of those know-it-all types of dudes, and that’s the same thing with Stephon.”

“What separated Champ was smarts, and he was smooth. He was so smooth as he got older, and he didn’t have to overwork himself as he got older because he was smart and very instinctive. Training Stephon and watching him daily, he’s smooth.”

“Stephon wants to be the best. He asks questions, he wants to know more, and that to me is what this generation of players is not doing enough. He’s humble, he works. You wouldn’t think he was Defensive Player of the Year based on the way he carries himself.”

Throwing his support behind his guy, Bly also explained why the Patriots cornerback was the right choice for Defensive Player of the Year in 2019, pointing to Gilmore’s league-best six interceptions.

“The dude had six picks this past year, and again, if you’re really studying and doing what you’re supposed to do, I think a corner should make four-to-five picks every year,” Bly said.

“These corners sitting here saying they don’t get thrown at enough to make plays, to me that’s whack. That’s an excuse. If you are instinctive, have good ball skills, and are really locked in, you should make four picks every year.”

“Get one or two picks and call yourself the best corner in the game? I don’t get it. Stephon had six this year. He was the top dude. He still made plays. That’s what it’s all about, and that’s why he was deserving of Defensive Player of the Year.”

Due to the one-on-one nature of their sessions, Gilmore and Bly’s workouts are unbothered by the ongoing coronavirus pandemic that is putting the sports world on hold.

The two will continue working together until Gilmore needs to report back to Foxboro as they did the last two offseasons, yielding back-to-back first-team All-Pro nods for the Pats corner.

Entering his ninth NFL season, Gilmore’s mental grasp of the game and physical gifts are in complete harmony with no signs of slowing down any time soon.