Inside the Numbers: Gronkowski vs Ramsey & Whether We’ll See Much Of it on Sunday 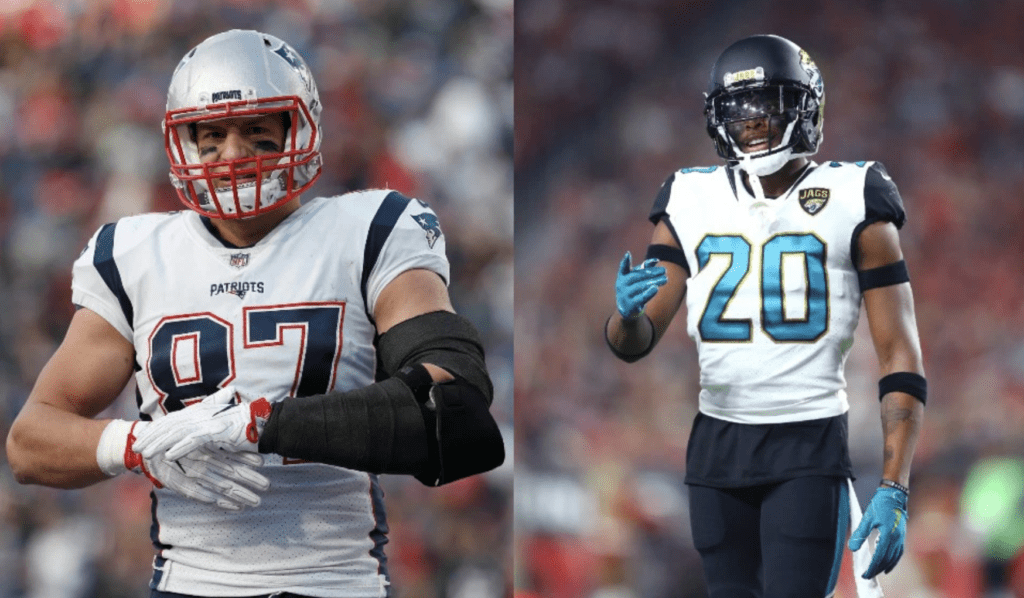 FOXBORO — The Patriots and Jaguars are set to square off in Jacksonville this Sunday, and all eyes will be on the matchup between Jags corner Jalen Ramsey and Patriots tight end Rob Gronkowski.

Ramsey, of course, told ESPN back in August that the four-time All-Pro Gronkowski, “isn’t as great as people think he is.”

Ramsey then backed up his argument by saying that when matched up against cornerbacks, Gronk isn’t as dominant as when he goes up against safeties and linebackers.

The numbers do suggest that the Jaguars’ All-Pro cornerback has a point, but context is key when looking at the data.

For example, cornerbacks are naturally better coverage players than safeties and linebackers and throws outside the numbers are lower percentage passes than throws in the middle of the field.

But the real question here is not about right or wrong, we already know Ramsey’s comments are foolish, it’s about whether or not we’ll see Gronk covered by Ramsey enough to draw a conclusion on Sunday.

And that’s where the data suggests that all of this trash talk could be for nothing.

Last season, Ramsey only lined up over the opposing team’s tight end 34 times in 764 snaps in coverage, including playoffs (4.5 percent), and was thrown at just five times in those situations.

(Gronk in the slot vs. Ramsey at the top of the screen)

And Ramsey only covered Gronk once before the Pats tight end’s injury in last year’s AFC Championship Game.

As for Gronk, he went up against corners far more frequently than Ramsey covered tight ends in 2017.

Opposing defenses matched Gronk with a cornerback on 105 of his 588 pass routes (17.9 percent).

So it would appear that if we get the Gronk vs. Ramsey showdown on Sunday that it will be the Patriots dictating that matchup, not the Jaguars, as the Pats often isolate Gronkowski as an outside receiver to get him a one-on-one matchup and diagnose the coverage.

Although we might not get the heavyweight bout we’ve been waiting for between Gronk and Ramsey, I polled the cornerbacks in the Patriots locker room to see what its like to go up against the monster tight end in practice:

Stephon Gilmore: “I’ve covered him in practice, in games [in Buffalo]. It’s hard. He’s a big guy. Even if you’re close to him, he’s hard to cover.”

Eric Rowe: “It’s tough. First, you know the ball is coming to you at least 80 percent of the time. And then, I mean he’s not fast, but his body position and how big he is it’s tough to get around him and the way Tom puts the ball in a spot where you can’t get it. He has huge hands. It’s really hard. The hardest part is trying to get around him. He’s not running away from me, but I try to undercut him, but he’s so wide it’s hard to get under him and get to the ball, and then the ball placement from Tom. It’s hard.”

Jonathan Jones: “He’s one of the best tight ends in the game. It’s a challenge it’s definitely a challenge. He’s a big tight end with good hands. You gotta respect it.”

The Patriots and the Jaguars will play a rematch of last year’s AFC Championship Game in Jacksonville on Sunday with kickoff at 4:25 pm eastern time.

Lazar: How Do the Patriots Handle the Jerod Mayo-Steve Belichick Conundrum?

Kadlick: This is the End of the Road for Tom Brady | BetOnline.ag