Is it Time for the Bruins to Bench Nick Ritchie? 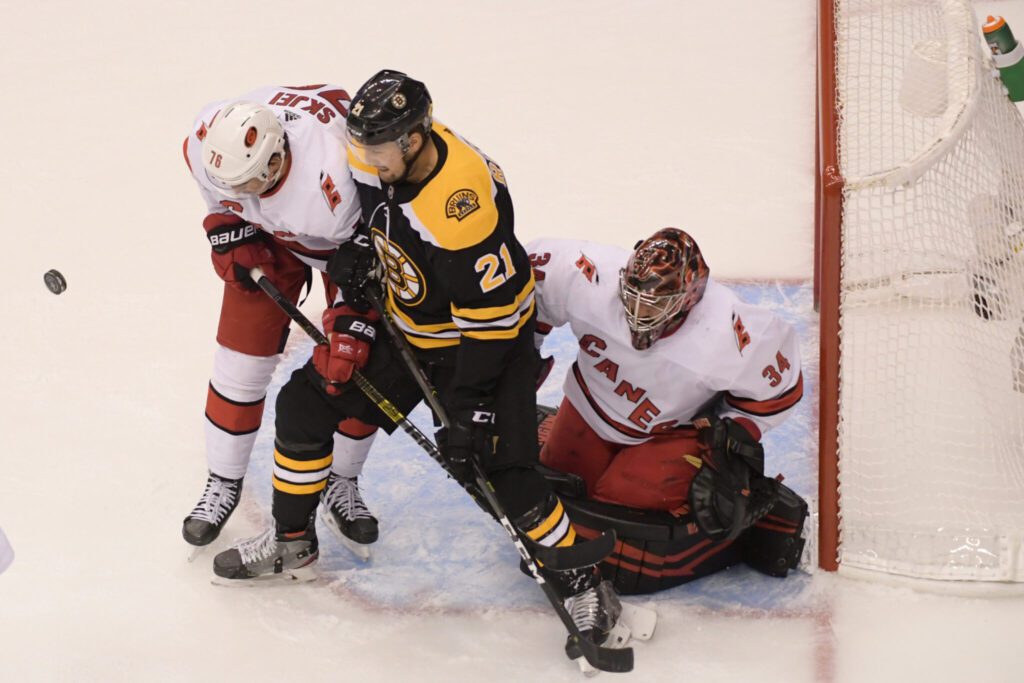 The Boston Bruins aren’t going to get any better if they don’t tackle their problems head on.

Bruins head coach Bruce Cassidy told the media Friday that he’d be making some lineup changes both at forward and on defense. While this could mean many different things, one player, in particular, should see some time up on the ninth floor… as we’d say if the B’s were playing at TD Garden.

Cassidy:
“We’ll be making some changes, both at forward and
D.”

Nick Ritchie, who the Bruins acquired from the Anaheim Ducks in exchange for Danton Heinen, should be removed from Boston’s lineup ahead of Game 3 against the Carolina Hurricanes on Saturday.

The 6-foot-2, 235-pound winger was acquired by Bruins general manager Don Sweeney to provide an extra layer of grit and toughness heading into the playoffs, which is something we haven’t seen at all through two games against the Hurricanes.

In Boston’s 4-3 overtime win over Carolina on Wednesday, Ritchie appeared to be a weak link in the Bruins chain. The 24-year-old finished without a shot on goal in 12:50 of ice time and laid out just four hits, lacking a large physical presence.

On another note, Ritchie also played a role in two goals against during Game 1. In the first period, he gave up on a play along the boards, allowing Warren Foegele to break loose and eventually turn the play into a Joel Edmundson goal, as every Bruin on the ice watched the puck.

Joel Edmundson gets the Canes on the board with 6:58 left in the 1st period.

Again in the third period, it was Ritchie who could be seen puck-watching, which eventually ended in Haydn Fleury firing one past Tuukka Rask from the point.

Haydn Fleury’s shot from the point evens things up once again midway through the third.

In both situations, Ritchie became a liability, lost two puck battles that turned into goals, and didn’t do the job he was brought in to complete — use the body and win battles.

During Game 2 on Thursday, Ritchie saw a decline in ice time, playing just 10:45. Although he wasn’t on the ice for a goal against, he recorded just two hits and one blocked shot, which isn’t exactly ideal for the guy who is supposed to be Heinen’s replacement.

Of course Cassidy is probably going to elect to play Ritchie — he has more experience than many of the guys who are awaiting the call to the Black & Gold’s lineup. But he essentially was invisible during Game 2, and that’s something that just can’t happen against a young, fast and talented Hurricanes squad.

Karson Kuhlman, on the other hand, who was inserted into Cassidy’s lineup as a replacement for David Pastrnak, recorded three hits, one blocked shot and one takeaway in 9:42 of ice time. He was also much more of a presence on the ice, making smart plays and using his speed to burn Carolina defenders.

Now, if Pastrnak returns for Game 3, you’d think Cassidy may want to replace Ritchie with Kuhlman. The 24-year-old does have some experience in the postseason — he played eight games during the 2019-20 playoffs and recorded three points (one goal, two assists).

If Ritchie isn’t going to play the body, there’s really no use in having him weigh down the Charlie Coyle line. On that note, too, you don’t necessarily need someone like Ritchie in the lineup against a Hurricanes team that we’ve seen take advantage of the Bruins’ lack of speed time and time again.

Inserting Kuhlman on Coyle’s left wing and allowing Anders Bjork to slide over to the left side will allow Boston to take advantage of Carolina’s third line of Brock McGinn, Jordan Staal and Justin Williams, using speed and skill to do so.

If Cassidy decides Kuhlman isn’t the answer, they have a few other players who could be inserted into the lineup. For example, Boston has Trent Frederic, Jack Studnicka, Par Lindholm, Paul Carey, Anton Blidh and Zach Senyshyn all waiting to prove their worth. You wouldn’t necessarily slot in Senyshyn, though Blidh, Lindholm and Studnicka all could rise to the occasion.

However, it’s unlikely a majority of those players slot in at any point during this series, unless, of course, injuries begin to pile up.

The fact of the matter, though, is that if Pastrnak remains out of the lineup for Game 3, there’s no telling whether or not Ritchie will remain in Boston’s game plan.