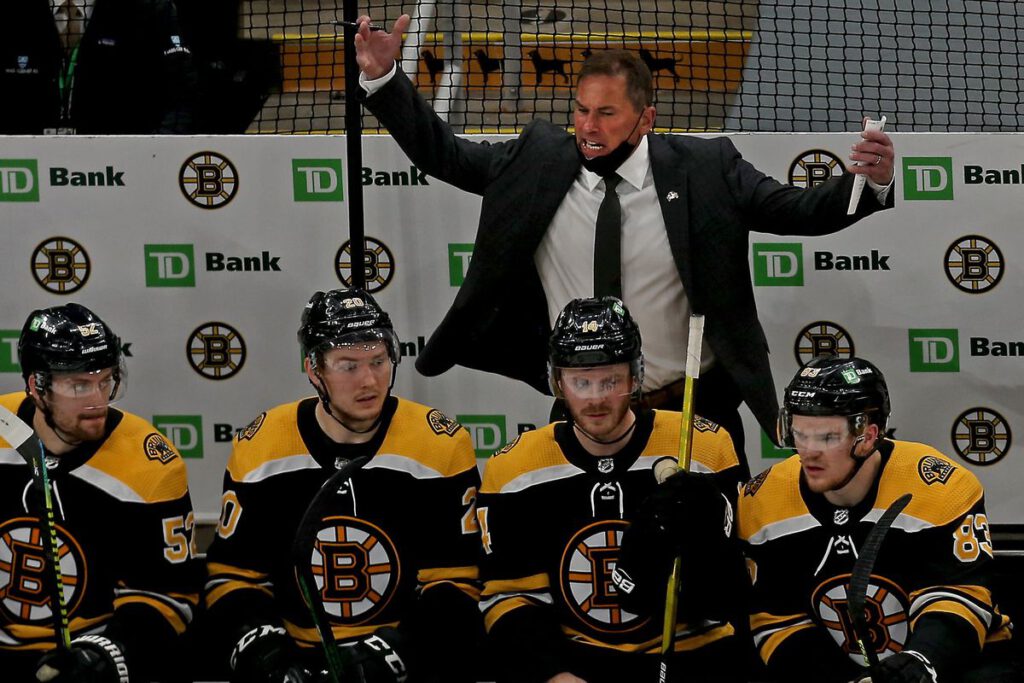 The Bruins and Islanders faced off in Game 6 of Round 2 in the 2021 Stanley Cup Playoffs. Boston, who was down in the series 3-2 to New York, looked to stay alive. Going into the game, the Bruins were missing fourth-line centerman Curtis Lazar due to a lower-body injury. In return, the front end was shifted around a little bit. Jake DeBrusk returned to the lineup on the third line with Charlie Coyle and Karson Kuhlman. The last lineup change was Nick Ritchie slotting in on the fourth line with Sean Kuraly and Chris Wagner.

In the backend of the first, the Bruins got their first power-play of the game with 5:47 left on the clock. Then with four minutes left in the period, the Bruins were granted another man-advantage. On that second power play, with 24 seconds left, Brad Marchand tied it up with a well-placed wrist shot after a beautiful sequence of passes. The game remained tied at one after twenty minutes of play.

Fourteen seconds into the second, Kyle Palmieri hit Charlie McAvoy up high after a whistle, which sent McAvoy to the locker room for repairs. Shortly after, Karson Kuhlman received a tripping minor, but the Bruins’ penalty kill did their job and kept the game tied. Then, 5:20 into the second, Brock Nelson finished a breakaway chance to give the Islanders their lead back. With 13:55 left in the second, McAvoy returned to the ice for the Bruins. At the halfway mark of the second, the Islanders still led in shots, 19-14, scoring chances, 18-9, and high-danger scoring chances, 7-4.

Going into the final 10 minutes of the second, with 7:21 left on the clock, Nelson netted his second of the game to give the Islanders some breathing room. This one was soon after Tuukka Rask played the puck behind the net, Josh Bailey picked off his pass and sent it out front to Nelson to finish. Then with 3:53 left, Kyle Palmieri’s forecheck effort on Matt Grzelcyk in the net-front ended up with Palmieri grabbing a greasy goal. With the season on the line, the Bruins trailed by three goals going into the third period.

Heading into the third, the Bruins aimed to come back to bring this series to Game 7. The first whistle of the third period was blown after 5:20 of play and it was for a tripping minor on Matt Martin. Eighteen seconds into the Bruins power play, Marchand netted his second of the game with a quick-handed net-front finish. With 10:17 remaining in the third, the Bruins were generating solid offensive chances, but the Islanders still led in shots, 25-22, scoring chances, 23-18, and high danger scoring chances, 10-9.

In the backend of the third, the Bruins picked up their urgency and the Islanders focused on playing flawless defense and killing time. Through the first five minutes of play, both sides created nail-biting chances, and the Nassau Coliseum crowd provided frequent roars. As the time dwindled through the final five minutes, the Bruins had the upper hand in scoring chances generated, but still remained down two. With 59 seconds left in the third, Cal Clutterbuck scored an empty netter to give the Islanders a three-goal lead. 11 seconds later, Ryan Pulock gave the Islanders another empty netter. The Islanders beat the Bruins, 6-2 in Game 6 to win the series and move on to play the Tampa Bay Lightning.

Zajac netted the first goal of the night off a juicy rebound. Rask had no vision on this one.

With 2:24 left in the first, Marchand tied it up on the power-play. The sequence of passes sent from David Krejci and David Pastrnak was incredible, Marchand’s finish was even better.

Marchand ties it up on the power play!#NHLBruins 1#Isles 1 pic.twitter.com/QniQk0EqE6

Fourteen seconds into the second period, Palmieri hit McAvoy up high after a whistle and the officials deemed it absolutely nothing…

Kyle Palmieri with a shoulder to the face of Charlie McAvoy well after the whistle.

Then, 5:20 into the second, Nelson used his speed on a breakaway to give the Islanders a 2-1 lead.

Nelson scored his second of the game with 7:21 left in the second.

Nelson nets another to extend the Islanders lead.#NHLBruins 1#Isles 3 pic.twitter.com/CezHvHa5lu

Then with 3:53 left in the second, Palmieri netted a greasy goal because of a hard forecheck on Matt Grzelcyk in the net front.

5:38 into the third, Marchand jammed home his second of the game to put the Bruins within two.

Marchand nets his second of the game to put the Bruins within two! #NHLBruins 2#Isles 4 pic.twitter.com/iVdjahy4Fp