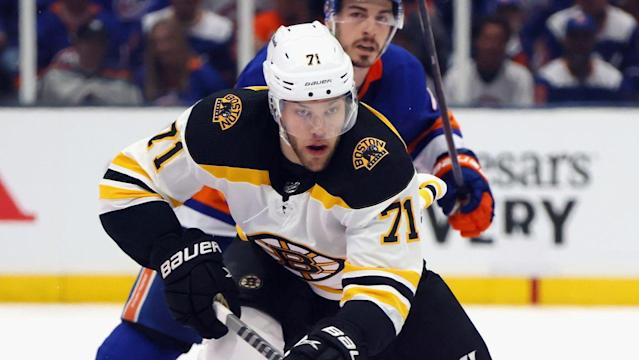 The Bruins and Islanders played Game 4 on Saturday and it wasn’t too much of a thriller. Boston’s lineup was subject to change after losing Brandon Carlo in Game 3. Jarred Tinordi filled in on the Bruins backend for Carlo who was deemed day-to-day.

Through the first five minutes of play, both sides brought the energy. The Islanders had a little more pep in their step and in return, led the scoring chances, 3-1. Then with 12:32 left in the first, Taylor Hall dropped the gloves with Scott Mayfield. This was one of the first physical altercations that led to plenty more crispy encounters in the first period — like the post-whistle scrum that ended with a Tinordi and Matt Martin fight.

The Bruins started the back half of the first period on the power play but were unsuccessful. With 6:35 left in the first, the Islanders had the upper hand in scoring chances, 6-3, and high-danger scoring chances, 2-1. Deeper into the second, the Islanders continued to provide the pressure and forced Tuukka Rask to make several great saves. At the end of the first, the Bruins picked up their play and managed to generate plenty of solid chances. Regardless, it was a scoreless first.

To start the second, the Islanders started hot and got several scoring chances. Then, 2:46 into the second, the Bruins got a power play because of Martin’s holding minor on Brad Marchand. This power play led to the Bruins’ first of the night, when David Krejci picked up David Pastrnak’s rebound and managed to beat Semyon Varlamov. Then with 13:22 left in the second, Kyle Palmieri tied the game up with a net-front tap in off a behind-the-net pass sent from Jordan Eberle.

With 9:23 left in the second, the Islanders led in scoring chances, 23-12. Both teams also had seven high-danger scoring chances apiece. Deeper into the second, with 8:44 left in the period, Krejci speared Mathew Barzal and was lucky to only receive a slashing minor. Deeper into the second, the physical play and exchanging of offensive pushes continued to occur. The Islanders carried the offensive play a little bit more than the Bruins in the second. At the end of the second, Charlie McAvoy was called for high sticking on Anthony Beauvillier that would leak over into the third. The second ended with both sides tied at one.

At the end of the second, the Islanders led in scoring chances, 24-14. Both teams had 20 hits, 21 shots on goal and eight high danger scoring chances each.

Then with 6:57 left in regulation, Barzal batted a puck out of the air and past Rask to give the Islanders the lead. With 5:09 left in the period, the Islanders still led the third-period scoring chances, 8-6, and high danger scoring chances, 3-1. Throughout the end of the third, the Bruins put the pressure on, but the Islanders’ defense was too sharp. Then with 1:03 left in the game, the Bruins pulled Rask and Casey Cizikas netted an empty netter to put this one out of reach for Boston. To top the game off, Jean-Gabriel Pageau notched another empty-netter.  The Islanders went on to win Game 4, 4-1, to tie the series up, 2-2.

7:28 into the first period, Hall and Mayfield took part in a scrap. This was the first fight Hall had been in since March 3rd, 2011…

Then with 10:37 left in the first, Tinordi and Martin dropped the gloves.

With 5:04 left in the first, Rask made a huge save on Anthony Beauvillier.

Tuukka Rask with a MASSIVE stop on Anthony Beauvillier: pic.twitter.com/qs5Qv3EB9o

3:57 into the second period, Krejci netted the first goal of the game on a Bruins power play.

Krejci nets the first of the game on the power play!#NHLBruins 1#Isles 0 pic.twitter.com/2ELgBYbwzL

6:38 into the second, Palmieri tied it up with a net-front tap-in.

With 8:44 left in the second, Krejci slashed Barzal and he for sure felt that one.

With 6:57 left in regulation, Barzal batted one out of the air to give the Islanders a late third-period lead.

Barzal gives the Islanders the lead with 6:57 left in regulation.#NHLBruins 1#Isles 2 pic.twitter.com/fZtZHlVOjq

With 1:03 left in the third, Cizikas got the Islanders’ first empty-netter.

Then to finish the game up, with three seconds left, Jean-Gabriel Pageau iced the cake with another empty-netter.