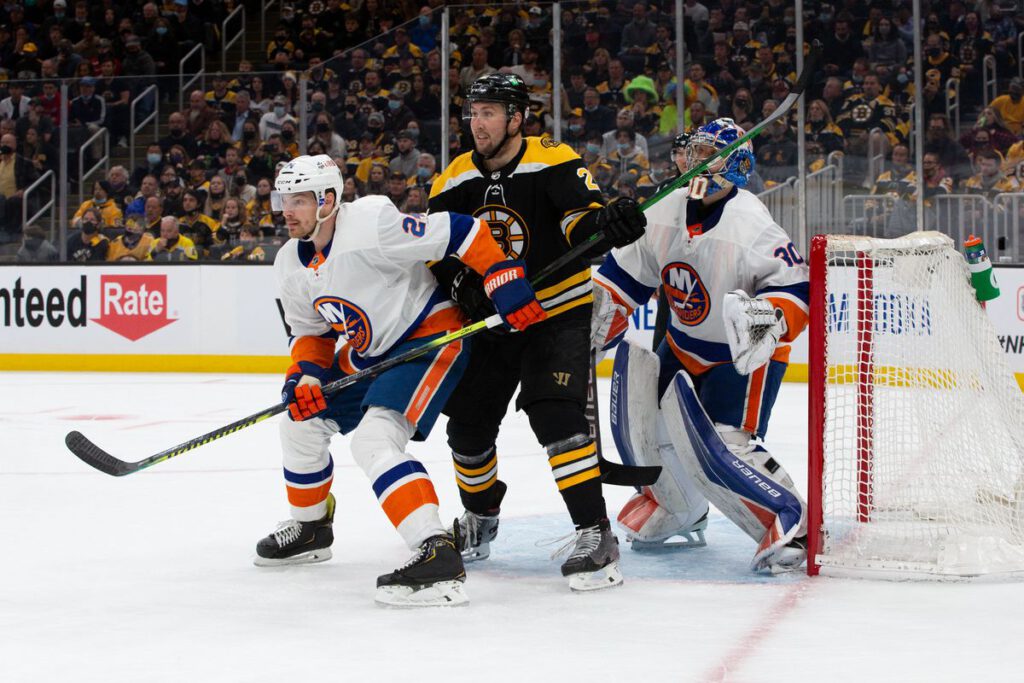 The Bruins walked into Game 2 with a win under their belt, but without Craig Smith. Jake DeBrusk filled in on the second line and Karson Kuhlman took over DeBrusk’s spot on the third line. Looking at the Islanders lineup, the only change was Semyon Varlamov starting in net instead of Ilya Sorokin.

To start the first, both teams went with their fourth lines. A little over two minutes into the first, Charlie Coyle skated to the outside and made a shifty inside cut move on Nick Leddy. He eventually beat Varlamov on the far pipe to give the Bruins a one-goal lead. Through eleven minutes of play, the Bruins led in scoring chances, 7-2, and high-danger scoring chances, 2-0. Although the scoring chances were a little one-sided, both teams came out in this first period banging bodies and flying around.

Throughout the back end of the first, bodies were still flying and it was easy to see the hatred developing within these teams. With 5:46 left in the first, Sean Kuraly caught a stick up high from Leddy, the Bruins did not get a power play and Kuraly went to the locker room. After several shifts, Kuraly returned to the bench. In the last few minutes, both teams took turns hitting each other and getting some close scoring chances.

Going into the second, the Bruins and Islanders continued their fast pace play. 5:09 into the period, The Islanders were given their first power-play of the game. David Pastrnak ran right into Varlamov and was handed a goaltender interference penalty. From that man-advantage, the Islanders tied it up 6:52 into the period. Josh Bailey sent a puck out in front of the net that got deflected off of Jeremy Lauzon’s skate and in the net. Through ten minutes of play in the second, both sides had three scoring chances and the Islanders led in high danger scoring chances, 3-1.

With nine minutes left in the second, Kyle Palmieri gave the Islanders a one-goal lead after crashing the net hard with a couple of jabs to trickle it in. A minute later, Ritchie and Matt Martin got matching roughing minors. Those minutes of four-on-four play allowed the Bruins to get some open space in the offensive zone and generate some really good chances. Deeper into the second, Brandon Carlo received a minor for cross-checking Leo Komarov. With 2:39 left in the second, the Islanders extended their lead on that power-play, Jean-Gabriel Pageau netted a backside pipe tap in sent over from Anthony Beauvillier. The Islanders held onto a two-goal lead heading into the final twenty minutes of Game 2.

The third started with two minutes of four on four play because of Ritchie and Ryan Pulock’s matching roughing penalties. Throughout the first ten minutes of play, chances and big hits were exchanged. The Bruins knew they needed to be stronger than they were in the second. At the 10-minute mark, the Bruins led scoring chances, 5-2, and high danger scoring chances, 1-0, in the third period alone. Then with 9:26 left in the third, Marchand fed Patrice Bergeron in the high slot for a one-timer. Bergeron’s shot beat Varlamov and the Bruins then trailed one goal, with a little less than a half a period to go.

With 5:21 left in the third, the Bruins were granted a power play because of a too many men penalty on the Islanders. 27 seconds into that power play, Marchand sniped Varlamov’s top right corner to tie the game up. In the remaining time in the third period, the Bruins had a huge penalty kill and Tuukka Rask made several phenomenal saves. The clock trickled down to zero and this one went to overtime.

Deeper into extra time, both sides took turns getting scoring chances and trying to run through each other, the amount of “ooh’s” and “ah’s” let out from the Bruins fans were absurd. Twelve minutes into overtime, the Bruins and Islanders were tied in scoring chances, 7-7, and high danger scoring chances, 1-1. Both Rask and Varlamov played very strong and made multiple tough saves throughout the first chunk of overtime.

Finally, with 5:12 left on the clock in overtime, Casey Cizikas was blessed with a breakaway and beat Rask over his right shoulder. The Islanders won Game 2, 4-3 in overtime to tie the series up, 1-1.

2:48 into the first, Coyle skated to the outside and made an inside cut move on Nick Leddy, he eventually beat Varlamov on the far post to put Boston up one.

With 5:46 left in the first, Kuraly caught a high stick from Leddy and no penalty was called…

Nick Leddy gets Sean Kuraly up high and Curtis Lazar wasn’t a huge fan of it: pic.twitter.com/J5bnCKLm2V

6:52 into the second, Bailey tied it up for the Islanders with a weird deflection off of Jeremy Lauzon’s skate.

Bailey ties it up on the power play.#NHLBruins 1#Isles 1 pic.twitter.com/i5589IMZXY

11 minutes into the second, Palmieri crashed the net and got a greasy goal to give the Islanders the lead.

Late in the second, on the 4v4 play, Marchand certainly made use of all that free space.

With 2:39 left in the second, Pageau netted a backside pipe tap in on the power play to give the Islanders a two-goal lead.

Ritchie and Pulock exchanged pleasantries at the end of the second.

Nick Ritchie and Adam Pelech get into it at the end of the second: pic.twitter.com/XBaYeH8ed3

6:01 into the third, Krejci ran through Andy Greene.

David Krejci with a big hit on Andy Greene: pic.twitter.com/pHk1KeSnDr

With 9:26 left in the third, Bergeron let a high slot one-timer go to the back of the cage.

Bergeron’s one timer goes to put the Bruins within one!#NHLBruins 2#Isles 3 pic.twitter.com/TPNbtXj3KX

With 6:23 left in the third, Marchand let the bodies hit the floor on Pageau.

Brad Marchand with a massive hit on JG Pageau: pic.twitter.com/Z7EKlhifwl

Marchand tied the game up with 4:54 left in the third period on a Bruins power-play. With this goal, Marchand became the seventh Bruins player to record 100 career points in the playoffs.

Marchand ties it up on the power play!#NHLBruins 3#Isles 3 pic.twitter.com/koW6G3Ykrg

Cizikas won this one for the Islanders on a breakaway.

Cizikas ends this one and ties the series at 1 apiece. #NHLBruins 3#Isles 4 pic.twitter.com/UzoloH8BUv

The Bruins and Islanders will play Game 3 on Thursday, June 3rd at 7:30 p.m. ET back at Nassau Coliseum.