‘It Almost Felt Like Playoff Hockey’: How A 7-3 Win Over the Capitals Could Have Long-Term Implications for the Bruins 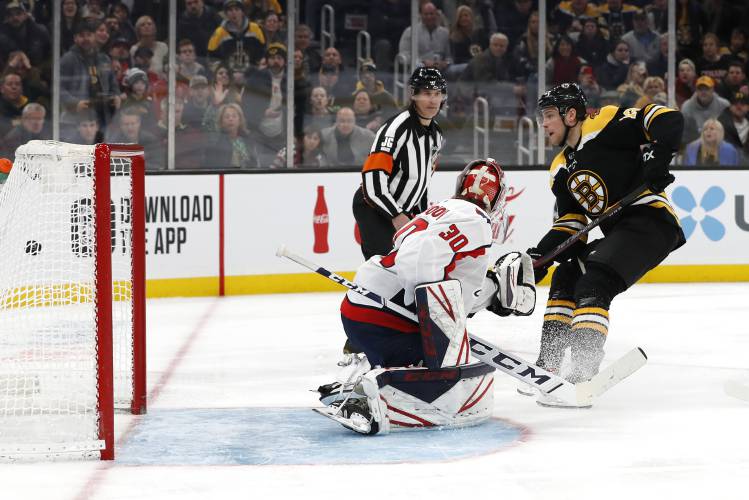 They needed a lot of things, and the stage was not set for any of this to happen. In their last 17 games against the Capitals, the B’s were 1-12-4. In their last nine games, they’d lost eight times.

But then the first period happened and all of those historical indications went out the window, leading the Bruins to beat the Capitals 7-3 Monday night.

“It almost felt like playoff hockey,” David Pastrnak said after the game.

Five minutes into the first period, the Bruins had already swung and missed on one power play opportunity. They could barely enter the offensive zone cleanly — it looked to be the Bruins disappointing man-advantage rearing its ugly head once again.

They’d get a second crack at it when Radko Gudas went off for a hook. David Krejci threw the puck towards the Capitals net and Jake DeBrusk patiently waited for Braden Holtby to show the slightest opening between his legs.

When it opened up, DeBrusk jammed it through to make it 1-0 Bruins.

Check the “power play production” box. Check the “secondary scoring” box as well. Check the “scoring the first goal” box while you’re at it.

“I’m glad we got it to the net for a second chance,” Bruce Cassidy said of DeBrusk’s goal. “Because if you look at their kill, they tend to leave that guy open a little bit.”

A few moments later, David Pastrnak took the puck down the left wing and ripped a wrist shot on Holtby. The rebound popped out to Brad Marchand, who was already crashing the net hard, and he slid it through the goaltender’s legs to extend the lead to two goals.

For Marchand, it was his first goal in 13 games and his first of December. As he skated toward the bench to go through the fist-bump line after scoring, he physically pretended to throw the monkey off his back.

Check the “Marchand scoring” box. And at that point, it was a 2-0 lead less than 10 minutes in, so you can go ahead and check the “hot start” box as well.

“It’s kind of been one of those stretches where the puck hasn’t been bouncing the right way,” Marchand said. “It’s a matter of time. I knew I was going to get one eventually. I wasn’t too concerned about it. It’s nice when it does.”

And then 27 seconds later, Anders Bjork strengthened his case for top-six minutes when he slapped a one-timer past Holtby to make it 3-0.

The rout appeared to be officially on at that point, which means you can check the “hot start” box and the “secondary scoring” box as well.

Down 3-0, the Capitals looked to be fully imploding. The collapse peaked when Washington got two penalties on one play, giving the B’s a 5-on-3.

That’s when the Bruins cashed in on the power play again — this time coming from a tip from Patrice Bergeron off a no-look pass from David Pastrnak.

4-0 Bruins and it was only the first period.

You can check the “power play production” box and the “hot start” box.

“It’s the difference in the game, clearly,” Cassidy said of the opening 20 minutes. “Some of the things we talked about — how to attack them tonight, we were missing some of our heavier players for a number of different reasons — so we need to be checking well, skating well, reloading well, good sticks.”

A period like the first 20 minutes in Monday night’s game was exactly what the Bruins needed to snap out of their funk. The bounces went their way, the power play produced, they controlled play, and scoring came easy.

Then came the second part of the game: a lot of physicality, and even some dirty plays, from the Capitals.

Tom Wilson jumped David Pastrnak, causing a massive line brawl. Charlie McAvoy got drilled by T.J. Oshie with under two minutes to play in the game. The game ended with a bit of a brawl led by Brett Ritchie.

Tom Wilson gets ejected late in the game pic.twitter.com/gFnTjLgpaz

There was also the notable spear from Wilson on Pastrnak just moments before the two came together for their big altercation.

“There was a few incidents tonight,” Cassidy said. “I imagine player safety might be a little bit busy. I know if it was a guy like a Marchand of the world, they’d be getting looked at, so there was a few spears and some of those.”

The Capitals even pulled out the slew foot when Alex Ovechkin took Matt Grzelcyk down. That led Brad Marchand to have quite the response after the game.

“Yeah, I would,” Marchand said of if it was him doing what the Capitals did, he’d be hearing from the league office. “I didn’t see every play. There was definitely a few slew foots out there. We know I’ve been victimized of that. I don’t see everything out there. They play hard, they play physical. Things happen. We play that way.

Barring any long-term injuries stemming from this game to any of the Bruins, this win over the Capitals will most likely be seen as a turning point. It was one in which they re-gained their offensive confidence against the best team in the league and came together to defend themselves against some dirty play.

Only time will tell on whether or not this game means anything long-term for this team. But the feeling in the Garden and in the Bruins dressing room Monday night felt like this brought them a lot closer.

“I think every little bit helps,” Charlie Coyle said. “It’s fun. It’s fun to score, it’s fun to win games like that against good teams in your home building. It’s Christmas time and it feels good, so we want to keep that up. That’s one game, but yeah it does help.”

At the very least, it put them back on the right track.