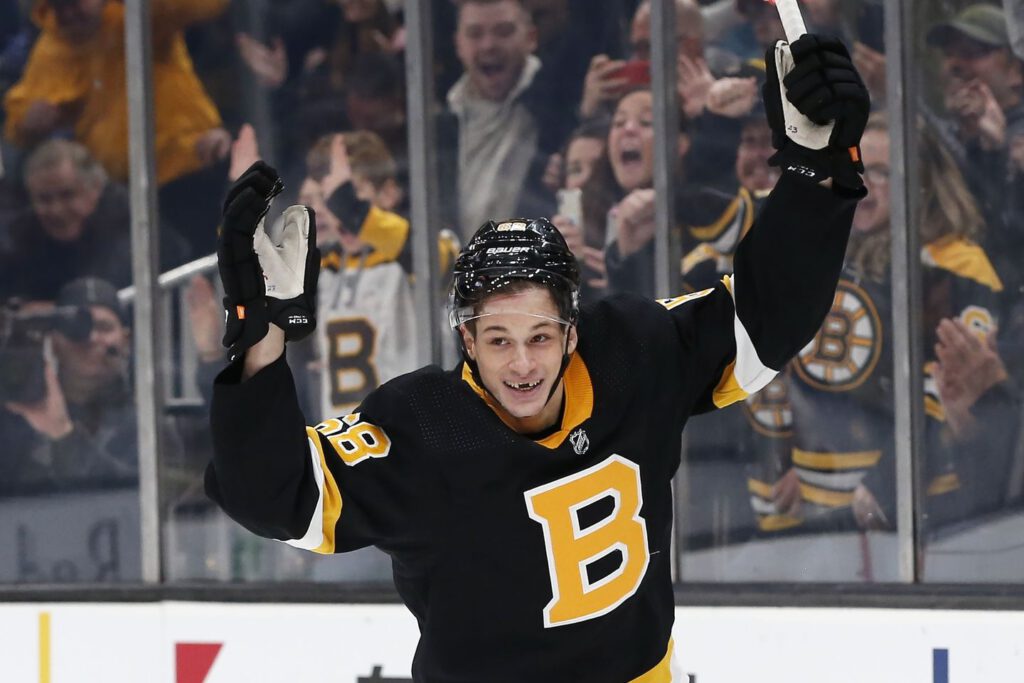 BRIGHTON, MA — Jack Studnicka took off down the wing. Stride by stride, Boston’s top prospect gained more and more speed as he closed in on Charlie McAvoy, who was tasked with defending against Studnicka.

Studnicka flew past the Bruins’ top defender, putting the puck around No. 73 and gaining space on the inside. Because of all this, he earned himself a high-danger scoring chance.

No, this wasn’t a game — it was a 2-on-2 drill at Day 2 of Bruins training camp. But with the chance Studnicka has in front of him, the abbreviated 2021 training camp might as well be a game.

“He’s like everyone else, a guy that we feel is close who hasn’t been there full-time pencilled into a permanent spot,” head coach Bruce Cassidy said Monday. “He’ll be competing for a place in the lineup. Right now I’ve played him on the right side in Pastrnak’s spot…We’re going to look at different people there.”

Even with so little NHL experience, it comes as no surprise that Studnicka is getting reps on Boston’s top trio due to David Pastrnak slated to miss the start of the season due to injury. The only positive to Pastrnak’s absence is that Boston will get its best look at Studnicka.

Studnicka jumped onto the scene in last summer’s bubble in Toronto. He skated shifts next to Charlie Coyle and produced chances. By the end of the postseason, he was skating with David Krejci and Jake DeBrusk.

According to Natural Stat Trick, his Corsi For Per 60 of 84.12 in the Toronto bubble was best on the Bruins. So was his Expected Goals For per 60 of 3.45.

“I was really impressed with his development to training camp last year to training camp in the bubble this past summer,” Patrice Bergeron said of Studnicka on Monday. “Just the jump that he’s made over that time was amazing to see. Now, I don’t think he’s missed a beat.”

A small worry with starting Studnicka on the right side is that he’s a natural center and with a player with the potential of Studnicka, some might shy away from using him in a different spot than he’s accustomed to.

The Bruins aren’t too worried about that.

Tyler Seguin began his Bruins career on the wing because that version of the B’s was also stacked down the middle. Bergeron did the same thing when he began his career.

“Seems like one of those players who’s smart and positions himself well on the ice,” Bergeron said of Studnicka. “I don’t think moving to the right side is an issue for him. I think he understands the game enough to do that switch.”

Studnicka is the only rookie vying for a spot on one of Boston’s top three lines. Most of the top nine slots are solidified. Bergeron, Marchand, David Krejci, Jake DeBrusk, Charlie Coyle and Craig Smith are pretty much guaranteed as opening night regulars in the top nine. Judging off two days of training camp, Ondrej Kase seems like the choice next to Krejci and Nick Ritchie or Anders Bjork could be the selection for the left side of Coyle.

The Bruins would like the new No. 23 to serve as an example to other younger guys in the system.

“That’s what we need,” Marchand said of Studnicka. “We need young guys to come in and perform and be big parts of this group and he’s one of those guys who’s going to do it for us.”

On Tuesday, Studnicka and Bjork did a lot of work together. With Marchand in the first group, Bjork took his place on the left side of Bergeron. Bjork and Studnicka played together for a bit during the Toronto bubble, so it made sense the two had some chemistry when completing 3-on-1s and 2-on-1s in Tuesday’s practice.

Watch for those two to see time together on Boston’s third line, as well as potentially battle each other for spots in the lineup once Pastrnak returns.

For the first time in a few years, the Bruins are fairly deep up front. They have speed, they have skill, they have smarts. However, there is one thing they’re missing quite a bit.

Unless Ritchie permanently drops down on line four, which is hard to imagine, Frederic would be a really solid answer to replace Joakim Nordstrom on that line. Frederic is young with real potential, while also being a sure bet to be able to complete the duties of left wing on the fourth line.

Don’t be surprised to see that as the fourth line when Game 1 comes around.

Back to regular practice for Brad Marchand

Marchand skated out onto the ice at Warrior Arena Tuesday afternoon with a much different look: a regular black jersey instead of the non-contact, maroon jersey he wore on Day 1.

He completed the entire session, never shying away from contact. Him and John Moore went up against each other in 1-on-1s, and neither seemed to hold back.

At this rate, I’d expect Marchand in the lineup for opening night.

When the Bruins left the Toronto bubble, many wondered whether or not Tuukka Rask had played his last game as a Bruin.

So far in camp, Rask has looked great. He was at all the pre-camp, voluntary skates. He looks engaged.

“I think his head’s been good since he got back and took care of his family, to be honest with you,” Cassidy said Tuesday via Zoom. “I talked to him shortly after that during the summer, again before camp and we’re not going back in time every time we discuss things. It’s just sort of hey, when the schedule comes out, anticipating what games he’ll play.”

Cassidy projects Rask will play about 60 percent of the games this year.