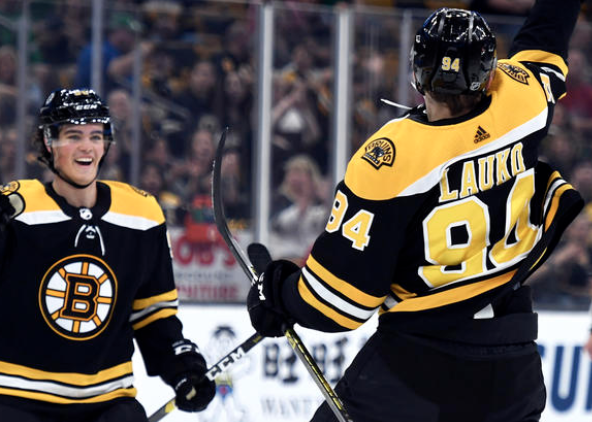 BOSTON – Preseason hockey is a time to find out what kind of depth you have in the organization.

And if you’re Bruins GM Don Sweeney and head coach Bruce Cassidy, you can never have enough 19-year-old prospects like you have in Jakub Lauko.

At the new-look TD Garden Monday night, Bruins fans got an up-close glimpse of why the Bruins are rightfully excited about their 2018 third-round pick (77th overall) out of the Czech Republic.

With just over 10 minutes left in the first period, he laid waste to Flyers forward Nicholas Aube-Kubel at the blue line and blew by defenseman Mark Friedman on his way to the end line. But just before taking himself completely out of any angle for a shot on Flyers goalie Brian Elliott, he broke of a snapshot that beat Elliott to the glove side for a 1-0 Bruins lead. It was an elite-level NHL goal-scorer’s goal, from the start of the rush to the end.

Jakub Lauko with a NASTY goal for the Bruins!

“Yeah, that’s what he does. When he’s on his game, he’s moving his feet, he’s chipping and chasing, he’s a tough guy to stop,” Cassidy told me. “He’s got a nice shot, and can make some plays. He’s still learning the ropes away from the puck, when to… breakout situations, defensive zone situations. I think that’s perfectly normal at 19, that’ll be the challenge for him, to take care of the details.

“He’ll always be fast, he’ll always want to score, always be competitive, get under people’s skin. But for him, it’s learning how to play every night, maybe when the puck isn’t falling into those things that a lot of those young guys go through. So, it’s nice to have a guy like that. I don’t know where he’s going to end up right now, to be honest, as a 19-year-old, where he’ll play exactly this year. But he’s certainly done a nice job for us in his time here.”

It was the perfect example of the talent they saw in him when they spent high draft capital in June 2018. He signed a three-year, entry-level deal three months later.

“He’s fast,” Bruins Assistant General Manager Scott Bradley said at the ’18 Draft in Dallas. “Energy, plays with a lot of character, willing to sacrifice, and this player can really shoot the puck. His best asset might be his speed.”

In a 4-3 overtime win featuring goals from the likes of regulars Brad Marchand, Chris Wagner and Jake DeBrusk (game-winner), all of whom figure to have spots sewn up on the roster, it was Lauko who lit up some eyes for a second straight preseason.

When he was scouted for the 2018 Entry Draft, his acceleration leading to rushes was right at the top of his list of assets. That was certainly on display again Monday night. This preseason, he has played in three games, with a goal and an assist.

During 2018 Bruins training camp, he scored a goal in each of his first two preseason games before being injured. His breakaway goal against the Capitals was Exhibit A of his lightning fast skating and shooting skills.

He was eventually assigned to the Rouyn-Noranda Huskies of the Quebec Major Junior Hockey League where he had 21 goals and 20 assists in only 44 regular-season QMJHL games. He then followed up with a further 13 points (6 goals and 7 assists) in the 19-game run to the Memorial Cup.

While the production was good but not eye-popping, it’s his speed and explosiveness that makes him special.

It seems somewhat ironic that Lauko again showed off his skills on a preseason night when another Bruin from the Czech Republic – David Krejci – went down in the first period against the Flyers and did not return. It may be nothing but when you’re Sweeney and Cassidy, knowing you have this type of skill waiting is not insignificant.

The Bruins will be seeing another great talent on Wednesday, only on the other side when New Jersey’s first-overall pick Jack Hughes comes to town with the Devils.

“I think you might see one on Wednesday, with [Jack] Hughes. He seems to have found his way here early on in exhibition, regular season’s a different animal,” Cassidy said. “I think you’ve got to be pretty special to come in at that age. They tend to be the guys that are as advertised the year before. There’s always a guy that sneaks up on you though, I’ll say that.

“I don’t know if I’ve seen him yet this year, obviously we haven’t seen a lot of teams. You know, Lauko, if you’re referring to a little bit about how he plays, I think he certainly has the ability to dazzle, it’s just for him it’s the everyday challenges of playing in the league and probably our roster. He’s behind certain guys that are established NHLers right now.”

All of this makes you wonder if the Bruins will decide to let the 19-year-old get more seasoning this year in the more mature AHL in Providence and be ready at the call if needed. The Bruins have two more preseason games to find out exactly what they have in Lauko and make up their minds on where he fits best into their future.