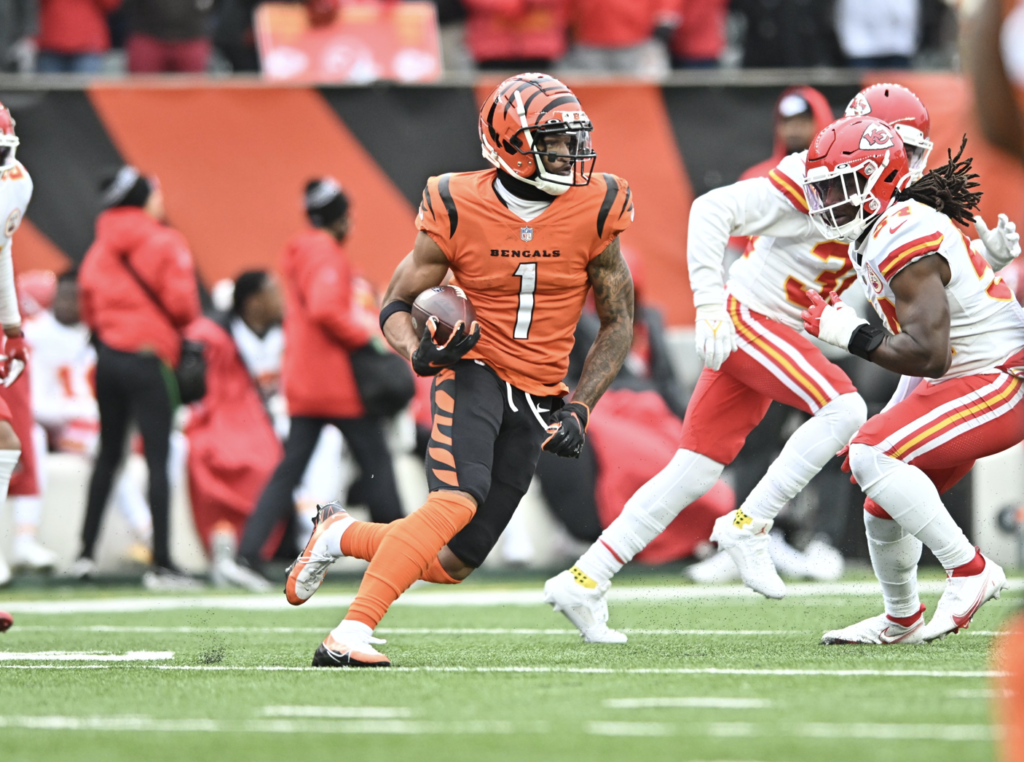 CINCINNATI — The Bengals won the AFC North in most dramatic fashion.

Ja’Marr Chase caught 11 passes for a team-record 266 yards and three touchdowns and made an incredible catch on third-and-27 down to set up the game-winning score as the Bengals clinched their first division title since 2015 with a thrilling 34-31 win over the Kansas City Chiefs.

The Bengals erased deficits of 14-0, 21-7 and 28-7 and held the Chiefs to three second-half points and won when Evan McPherson booted a 20-yard field goal at the final gun.

Joe Burrow was injured late and limped off the field and watched from the sideline.

The Bengals took a 31-28 lead with just under 12 minutes left when Joe Burrow hit Tyler Boyd in the back left corner of the end zone. It was Burrow’s 34th touchdown pass in 2021, setting a new franchise record. The Bengals were aided by L’Jarius Sneed, who committed defensive pass interference on Tee Higgins and a personal foul for throwing Ja’Marr Chase to the ground at the Chiefs 17.

The Bengals allowed the Chiefs to move the ball downfield on the next drive, but stiffened just in time to hold Kansas City to a game-tying 34-yard field goal with 6:01 left in the fourth.

The teams exchanged three-and-outs to open the game, with the Bengals getting a first down completion to Ja’Marr Chase overruled and marked a yard short.

But the Chiefs responded on their next drive with a five-play, 72-yard drive, highlighted by a direct snap to tight end Blake Bell that yielded two yards on fourth-and-1 at the Bengals 31. On the next play, Mahomes fired a dart of 29 yards to Demarcus Robinson for a touchdown.

Burrow was sacked for a second time on their second series by Chris Jones on first down, setting up second-and-22. They eventually punted and the Chiefs and Mahomes responded with a seven-play, 63-yard drive, featuring a 24-yard completion to tight end Blake Bell on first-and-20 after a holding call.

Mahomes found Travis Kelce from four yards out to make it 14-0 in the first quarter.

After a three-yard run by Mixon, the Bengals finally showed life when Burrow hit Chase on a 15-yard dig. Chase, reprising his run against the Ravens in Baltimore on Oct. 24, outraced the Chiefs secondary on his way to a 72-yard touchdown.

The Bengals were close to getting off the field, as they had the Chiefs third-and-10 at the Kansas City 36. But Mahomes scrambled and found Mecole Hardman for 53 yards downfield. Three plays later, Darrell Williams ran it in from one and the Chiefs were back up 14, 21-7.

Burrow again came back with another impressive drive, marching 75 yards in nine plays. On a 17-yard completion to Tyler Boyd, Burrow passed Andy Dalton’s franchise mark of 4,206 in 2016. On the next play, Burrow hit Chase on a perfectly placed fade to the corner of the end zone as the Bengals closed to within, 21-14.

But again the Bengals defense couldn’t find a way to put pressure on Mahomes, who handed off to Williams for his second TD of the game. Mahomes found Byron Pringle for 27 yards on third-and-4 at midfield to help set up the score.

The Bengals got the ball back once more before the half and managed to move the ball to the Chiefs 28, where they settled for a 46-yard Evan McPherson field goal and a 28-17 deficit at the half.

With Jackson Carman filling in Quinton Spain at left guard, Burrow hit a wide-open Chase down the left sideline on a blown coverage and Chase easily raced 69 yards on the third play of the second half to cut the lead down to 28-24.

OFFENSIVE ROOKIE OF THE YEAR

Should The Patriots Draft Zay Flowers?