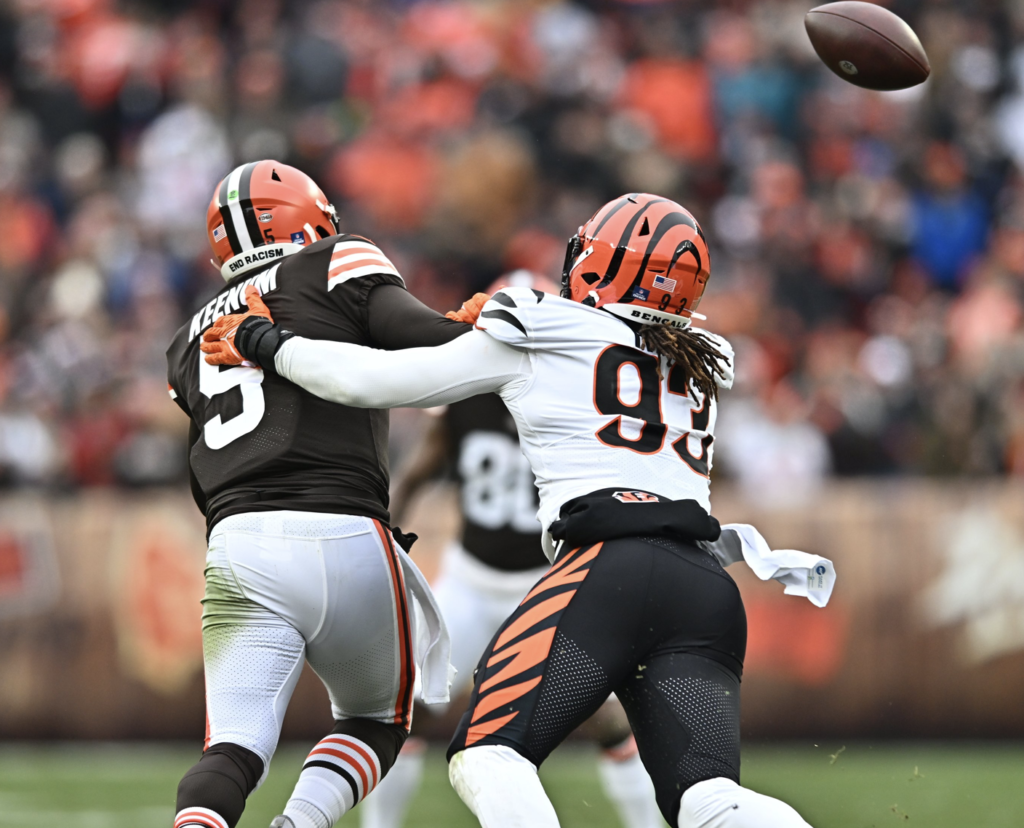 CLEVELAND — The Bengals can now focus on the playoffs.

With an offense that featured only Ja’Marr Chase, Hakeem Adeniji and Isaiah Prince as regulars and a defense where Mike Hilton was the only regular, the Bengals clearly placed a premium on protecting as many starters as possible heading into next weekend’s wild card playoff.

Case Keenum threw touchdown passes to Landry Jones and Demetric Felton as the Browns snapped their three-game losing streak with a 21-16 win over the Bengals in the regular season finale Sunday at a wet FirstEnergy Stadium Sunday in Cleveland. The Bengals had their three-game winning streak snapped and were swept by the Browns for a second straight season for the first time since the 1993-94 seasons.

Brandon Allen struggled in his first start of the season for a resting Joe Burrow, who did not make the trip to Cleveland. Allen finished 15-of-29 for 136 yards while Keenum was more effective, completing 17-of-24 passes for 176 yards and two touchdowns.

The Bengals (10-7) and Allen came out determined to get Chase the most reachable milestone of the day. Chase needed just 11 yards Sunday to reach Chad Johnson’s single-season mark of 1,440 set in 2007.

On the day Johnson turned 44, Chase caught the first pass of the day from Allen on the first snap for two yards. After an incompletion targeted for Chase on the first drive, the record would fall on Cincinnati’s second series of the day. Allen found Chase on an out in the right flat. Chase escaped the defense long enough to make his way upfield for 24 yards and the new record of 1,455 yards.

Chase made his way to the Bengals sidelines and C.J. Uzomah was there to greet Chase with a round of applause before Chase put on a long black team coat and his day was done.

The Bengals backups on defense held up well for the first two drives, forcing two punts. But on the third drive, Case Keenum got heated up with passes of 22 yards to Donovan Peoples-Jones and three runs by Nick Chubb for 23 yards. Keenum found Jarvis Landry in a soft spot in the Bengals zone. Landry caught the pass and then cut up field the final 12 yards for a 26-yard touchdown and a 7-0 lead with :56 left in the opening quarter.

While the Bengals could generate no offense whatsoever, the Browns used a short field courtesy a 32-yard Kevin Huber punt to march 58 yards for their second touchdown, a four-yard D’Ernest Johnson run up the middle. The score was set up by a helmet-to-helmet hit by Ricardo Allen on Jarvis Landry. Allen was shaky getting to his feet and made his way to the locker room and did not return.

The Bengals lost another player on defense when Vernon Hargreaves injured his right ankle midway through the second quarter. He returned in time for the start of the second half.

The Bengals’ defense was the only thing keeping the visitors in this game at the half. Wyatt Ray recorded a strip sack and Trayvon Henderson picked up the fumble and raced 29 yards for a touchdown. Henderson was a COVID call up before the game and his touchdown with 3:28 left in the first half cut Cleveland’s lead to 14-7.

The Browns were able to drive down the field and appeared certain to add to their lead right before halftime but Mike Hilton intercepted Keenum in the end zone and ran it back 35 yards as time ran out.

Another turnover! @MikeHilton_28 with the INT!

After forcing a three-and-out, the Bengals finally responded with their first offensive points of the day. The key play on the drive was a 16-yard pass interference drawn by Stanley Morgan, putting the Bengals at the Browns 23. The Bengals couldn’t punch it in and had to settle for a 36-yard Elliott Fry field goal that hit the cross bar and fell over, drawing the Bengals within four, 14-10, with 5:01 left in the third.

The Browns took a 21-10 lead when Keenum hit Demetric Felton for a 10-yard screen off to the right side and he ran it into the end zone with 7:14 left in the fourth quarter.

With 2:26, Brandon Allen hit Chris Evans on bootleg pass in the right flat on fourth-and-1 for a four-yard touchdown.