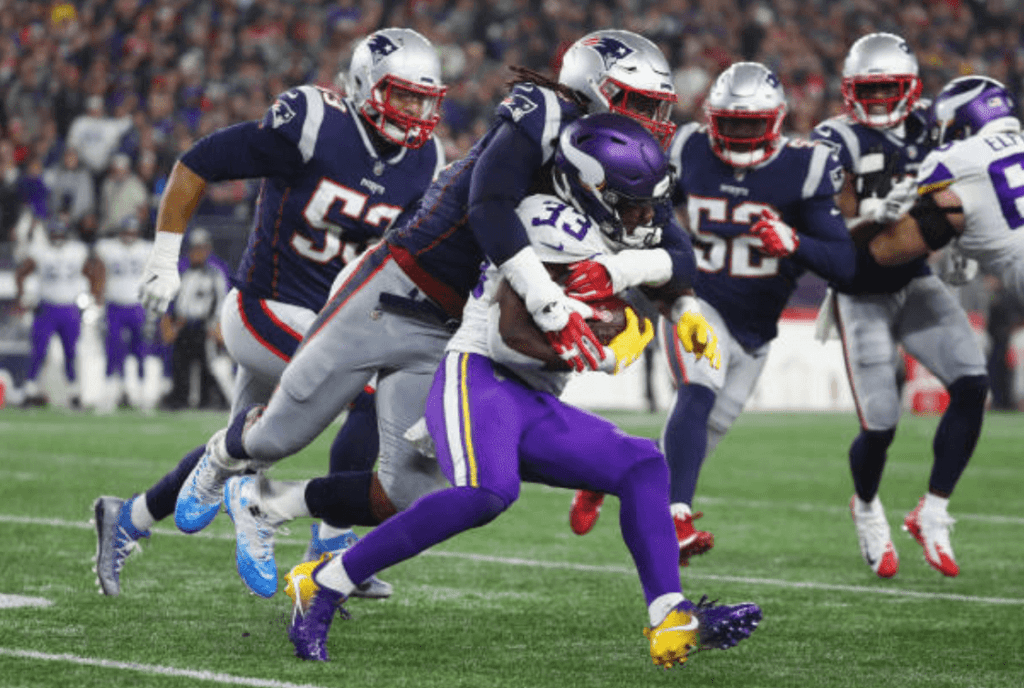 FOXBORO — Turns out James Develin might be the most overlooked offensive weapon on the Patriots.

The fullback, known for his powerful blocking style, scored twice on dives into the line near the goal line while the Patriots defense held the explosive Vikings in check for most of the game, leading the Patriots to a 24-10 win over the Vikings Sunday at a drizzly Gillette Stadium.

The win improves the Patriots to 9-3 and keeps them a game back of the Chiefs in the race for first in the AFC. The Texans defeated the Browns Sunday to also improve to 9-3. The Patriots hold the tiebreaker with both teams, having collected wins earlier in the season over both. For a full box score, click here. The Vikings, now 6-5-1, missed a golden opportunity to gain on the 8-4 Bears in the NFC North after the Bears were upset, 30-27, in OT Sunday by the Giants.

The Patriots now hit the road for games in Miami and Pittsburgh before returning home to finish the regular season against the Bills and Jets.

The Patriots won the game despite a rarity, Bill Belichick losing a pair of second-half challenges. On one of the second half challenges, Belichick and Adam Thielen got into a shouting match, with Thielen claiming a call was “bull–t” while Belichick told Thielen to “shut the f#$k up” in response.

After forcing the Vikings to go 3-and-out on the first possession of the game, the Patriots wasted no time taking control of the game.

The Patriots offense was a well-oiled machine on the opening drive. With lots of misdirection and under routes, Chris Hogan, Cordarrelle Patterson, Julian Edelman and Rex Burkhead all had receptions of at least 15 yards, with Patterson’s 24-yard gain down the left sideline the biggest play of the eight-play, 81-yard drive.

Tom Brady raised his hands in the air as he thought the Patriots took the lead on a run from Sony Michel. But Michel was stopped shy of the goal line. On the next play, fullback James Develin followed the block of left guard Joe Thuney and fell into the end zone for a 7-0 lead.

It was just the fourth time in 12 games the Patriots scored on their opening drive.

On Minnesota’s second drive, the Vikings were able to string together three first downs on three consecutive plays, taking them deep inside Patriots territory. Adam Butler then sacked Kirk Cousins back to the 30. An incomplete pass set the stage for a 48-yard Dan Bailey field goal attempt. The Vikings kicker yanked it wide left as Jonathan Jones provided an obstacle in the middle of the line.

On the ensuing drive, Brady faced 3rd-and-3 from the Patriots 45. As he was flushed out of the pocket, the field opened up in front of him and he ran five yards for the first down, finally reaching the 1,000-yard career milestone.

The biggest story of the first half was the Patriots defense. On Minnesota’s first three drives, the Patriots limited the Vikings to five first downs and 94 total net yards. Cousins was 9-for-13 but for just 40 total yards.

The Patriots were also exceptionally efficient in complementary football. On their third drive of the half, they held the ball for 15 plays and 8 minutes, 16 seconds, covering 68 yards. But on third-and-goal from the Vikings 1, McDaniels called a play that had Brady target Julian Edelman, who was defended at the goal line and the pass fell incomplete. The Patriots settled for a 20-yard Stephen Gostkowski field goal and a 10-0 lead.

With seemingly complete control of the game, a series of events changed the momentum before halftime. Brady hit Rob Gronkowski on a crossing route over the middle for what was ruled a first down at the Patriots 27. But Vikings coach Mike Zimmer challenged the spot on the play before the two-minute warning during the two-minute warning. Zimmer won the challenge, setting up a third-and-1 from the 26, with 2:28 left. On the next play, McDaniels called for a sweep to the right to White on the direct snap. The play was diagnosed perfectly by Danielle Hunter and White was stopped for no gain, forcing a Patriots punt.

.@athielen19's first catch of the game could not have come at a better time.#ProBowlVote pic.twitter.com/9eO3C0aPa6

The Vikings closed the first half with a well-executed drive of 74 yards in seven plays, capped off by a perfect touch pass from Cousins to Adam Thielen in the right corner of the end zone with 15 seconds left before the half. After gaining just 94 yards on the first four drives of the half, the Vikings nearly doubled it in 97 seconds.

With the Patriots up, 10-7, they went 3-and-out on the first drive of the second half, with Brady uncharacteristically giving up on a shotgun formation on third down. The Patriots defense went back to form, holding the Vikings in check on their first drive of the half and forcing a punt. When the Patriots got the ball back, they appeared to have regained valuable momentum driving down deep inside Vikings territory. But a pair of holding calls, on Rob Gronkowski and Joe Thuney, stalled the drive and the Patriots had to settle for a 48-yard Gostkowski attempt. But that try was way wide right and the score stood, 10-7.

The Vikings put together a 12-play drive that featured a pair of pass defenses by JC Jackson, both of which Vikings receivers hotly debated with officials were defensive pass interference. They had to settle for a 39-yard field goal that tied the game, 10-10, with 4:01 left in the third quarter.

The Patriots and Tom Brady, having not targeted Josh Gordon for the first 43 minutes of the game, were handsomely rewarded when they finally did on the next drive. A 24-yard connection brought the ball to the Patriots 49. Following a 15-yard pass to Rob Gronkowski and a 12-yard run by White, Brady hit a wide open Gordon for a 24-yard touchdown and a 17-10 lead.

Develin added his second touchdown dive, from 2 yards out, with 10:54 left in the fourth, giving the Patriots a 24-10 lead.