Jaroslav Halak Proving To Be Invaluable Insurance Plan for Bruins 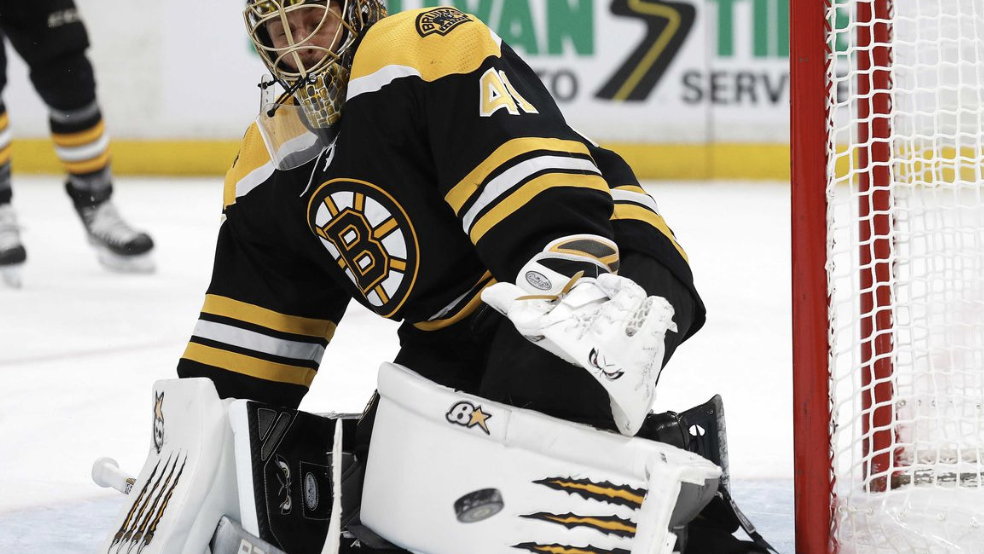 BOSTON – The Bruins have one of the biggest luxuries in the NHL. They have a pair of experienced and accomplished goaltenders.

Make no mistake, 32-year-old Tuukka Rask is the clear No. 1 goalie. But after watching 34-year-old Jaroslav Halak put on a goalie clinic in the second period, should something happen with Rask, as was the case in Vegas on Oct. 8 when he barely made it through 60 minutes of a 4-3 win, limping off the ice at the end due to cramps and dehydration.

It took a snipe of a wrister from Rickard Rakell through a screen to beat Halak in the second period. He faced 16 shots in the middle stanza, many of them without much support from the defense in front of him. The Bruins defense was beaten often in that second period.

Halak faced four point-blank chances from Anaheim skaters who were in alone. He answered the bell each time.

This is the second time in three starts that Halak has had to stand on his head to give his mates a chance at two points. On Oct. 5 in Glendale, he stopped all 35 shots for his 48th career shutout. Think about that for a moment. Rask has 46 since entering the NHL in the 2007-08 season.

The Bruins won 4-2 Monday afternoon thanks to a career-high four goals from David Pastrnak and his sixth career hat trick. But everyone knows what Boston can expect from its top line. What made Monday more significant is the way their No. 2 goalie played when they needed him in a tight game. Protecting a 2-0 lead, the Ducks put on unrelenting pressure.

Jaroslav Halak’s been hard to beat this afternoon #NHLBruins pic.twitter.com/Ya1LK3Nj1Q

“He had some of those in Arizona too, and he got his shutout, but more in the third if I remember, but it wasn’t a full 20,” Bruce Cassidy told me. “It seemed like we were not ready to go in the second, so we have to look at that as a staff. What can we do better? We talked about it between periods about what our standard is.

“We didn’t really get upset; it’s like, this is not who we are, and I thought we corrected it in the third. So, again, I’m an optimist. I liked our third; I liked our first. Our second, we’ll keep working on why we couldn’t execute. Breakouts are a big problem for us the last two games. Is it the other teams’ forecheck, is it talent, what is it? I don’t think it’s talent. I’ve seen us be good in that area a lot, so we’ve got to get ourselves, our puck support or just urgency dialed in.”

Don’t confuse urgency with focus. And Halak was dialed in for 60 minutes in Arizona and he was razor sharp in several big moments in the second period Monday.

“The mentality is to try and stay patient and let them make the first move,” Halak said. “I know I’m not a big guy but I try to make myself as big as possible.”

Halak signed for two years and $5.5 million on the first day of free agency in July 2018. It has been money well spent. Don Sweeney and Bruins brass deserves full marks for having the vision to sign a dependable, accomplished back-up behind their star goalie. Bruins management also knows that 26-year-old Max Legace and 22-year-old Dan Vladar, goalies in the pipeline, are not ready yet to move up.

In Halak, they also have a goalie who understands his role and is willing to do whatever the Bruins need. This year, that might include increasing his playing load, something Bruce Cassidy has acknowledged as the season gets underway.

“He had another great game,” Brad Marchand said. “We’re so fortunate to have the goalies we do and to be able to rely on them every night.”

Last year, Halak started 37 regular season games while Rask was the starter in 45 before the playoffs. But then Rask had the extra burden of starting all 24 games in the run to Game 7 on June 12.

Entering his final year of his contract, his long-term future in Boston is certainly not a given. But short-term, the Bruins appear to have a sure thing in their Rask insurance plan. And that’s invaluable.