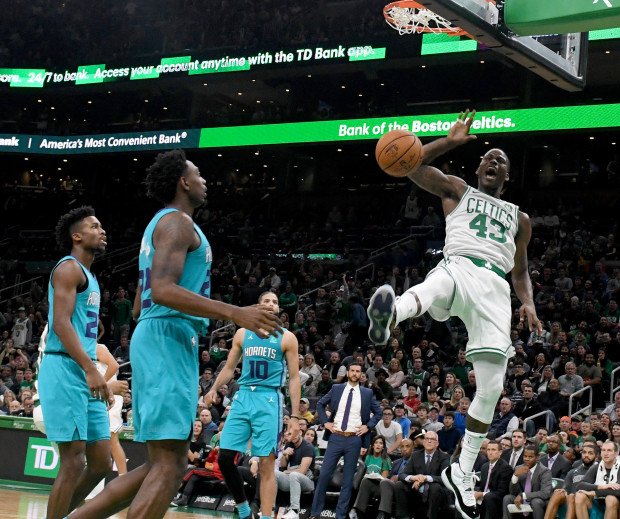 In more than one way, it was his debut. Green, who played overseas for four years after going undrafted, is vying for a spot on Brad Stevens’ roster.

He made a strong case for himself Sunday, following a second-half performance that helped the Celtics to erase a 16-point deficit and hold on to a 107-106 comeback win against the Hornets. Green checked in at the beginning of the fourth quarter, threw down an impressive put-back dunk and continued to attack the rim from there.

A backdoor cut by Green led to another thunderous slam, followed by a 3-pointer and three more dunks. He finished with 15 points on a perfect 7-for-7 from the floor to go with his 4 rebounds in 11 minutes.

“It was amazing,” Green said in the Celtics locker room. “This is my first NBA game I’ve ever been to, to watch, spectate, and to play in front of people at the TD Garden was amazing. Amazing feeling. You just want to go out and play your hardest, and get the win.”

What did Brad Stevens say after the game?

“He told me good game,” Green responded. “Way to be ready. Way to fight back and help us get this win.”

Stevens, a head coach who typically likes to keep his players level-headed, will always point out something that one of his players can work on. Sunday was no different when asked about Green’s performance against the Hornets.

“If he was a little bit more athletic, maybe he’d be pretty good,” Stevens joked. “But what he did coming off the bench with 10 minutes to go — jumped straight up and dunked it right after he came in, that’s ridiculously athletic. But he also plays really hard, he’s a competitor.”

Green’s hoping his competitive nature will build off of his standout performance. As a small forward, it’s going to be tough for Green to crack the list — the wing position is already crowded as is but he does have a fair chance of making the team.

Green will be fighting to play in future NBA games beyond the Celtics’ preseason slate. He’s not looking to attend any as a spectator in the foreseeable future.

Stevens’ decision for the 15th and final spot may come down to Green and big man Tacko Fall. If so, the Celtics still have plenty of time to make that choice after the next three preseason games.