Jaylen Brown acknowledged everything going on outside of basketball this season has impacted his play on the floor after escaping turnovers in Wednesday's win. 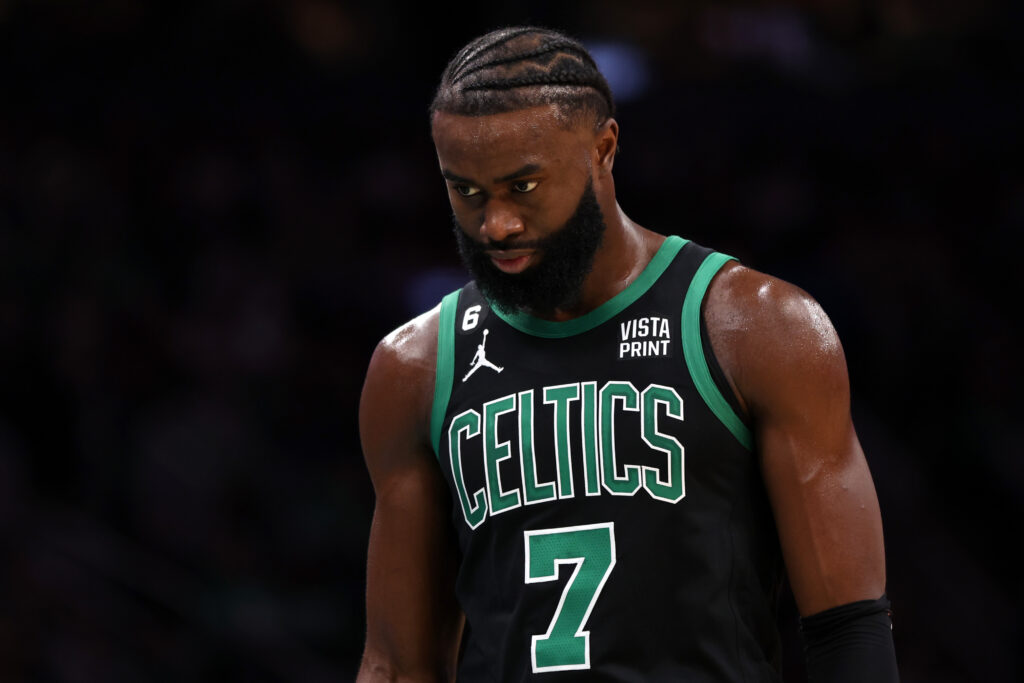 BOSTON, MASSACHUSETTS - OCTOBER 28: Jaylen Brown #7 of the Boston Celtics looks on during the first half against the Cleveland Cavaliers at TD Garden on October 28, 2022 in Boston, Massachusetts. NOTE TO USER: User expressly acknowledges and agrees that, by downloading and or using this photograph, User is consenting to the terms and conditions of the Getty Images License Agreement. (Photo by Maddie Meyer/Getty Images)
Share
Facebook Twitter Email

BOSTON — Separating from a long-time idol and marketing mentor. Seeing kids he also hoped to guide shut out of their basketball season at Donda Academy. Learning Ime Udoka, the head coach who guided much of his growth and empowerment last season, got suspended on the eve of the season and almost joined the Brooklyn Nets after. All the confusion and uncertainty that followed. It has all impacted Jaylen Brown.

Marcus Smart brought him back to the joy of basketball during a blowout win, turning to Brown midway through the Celtics’ shellacking of the Mavericks, and drawing a contrast between Luka Doncic-reliant Dallas and the Jays. One that aligned with the cowboy brand of their opponent.

“We’re out west in a shootout,” Smart said. “You’ve got a gun on (Tatum) and we’ve also got another one with you over here,” he told Brown. “We’ve got two sharpshooters that can do some damage, so when J.B.’s playing at his highest (level), he’s an MVP candidate as well.”

Brown and Tatum combined for 68 points, 17 rebounds, nine assists and only four turnovers in Wednesday’s 125-112 win. For Tatum, it marked a breakout from a 38% shooting slump over his past four games after an unmatched start to the season prior. Brown escaped an uptick in turnovers weighing down his offensive impact this month. He acknowledged a hectic start to the season off the floor influenced his struggles.

The turnovers, something he’s struggled with in the past, were mostly unforced.

“I’ve just been careless with the ball,” he said. “Being lackadaisical and just having an emphasis on being focused throughout the duration of the game. It’s not even a matter of anything the defense is doing, it’s just me being too careless. Going forward, (I’m) just focusing on what’s in front of me. There’s been a lot going on outside of basketball.”

This month began with Takeoff, a Migos founding member and neighborhood hero to Brown, dying on Nov. 1 in a Houston shooting. The Nets suspended Kyrie Irving days later for sharing a film with anti-semitic tropes. Brown and the National Basketball Players Association grilled the team’s six steps for him to return, and Joe Tsai’s statement that Irving had more work to do after the initial five games.

The sides eventually settled on a plan to get Irving back on the floor, as he considers further action to address the punishment. Brown tweeted — energy — earlier this week in response to a video of Black Hebrew Israelites marching outside Barclays Center to mark Irving’s return.

The group handed out anti-semitic pamphlets and self-identified as Israel United Under Christ, a hate group according to the Southern Poverty Law Center. Brown said he mistook them for Omega Psi Phi, a historically Black fraternity also known as the Ques, who wear purple and gold like the Barclays demonstrators did.

“You do the best you can and balance everything,” Brown told CLNS Media on Wednesday. “Regardless of what you say, some people are gonna disagree or already form an opinion, so you just come out, you do what I’ve been doing, trying to uplift my community, spreading kindness, spreading love, trying to be the best version of myself, but also help any and everybody around me. That’s what I’ve been since I came into this league, and that’s what Imma continue to do. Just focusing on that and taking care of basketball and everything just falls in line.”

When Brown took the floor on after committing nine turnovers on the three-game road trip, he caught the ball around two screens and scored inside. Al Horford found him for a pair of cutting layups, then Brown stole the ball from Dorian Finney-Smith and drove the ball to the rim for a left-handed finish. Brown shot 7-of-8 inside five feet, 2-of-3 from elsewhere in the paint and 2-of-4 on mid-rangers, which Joe Mazzulla advocated for in spots within a three-point based offense.

Mazzulla saw Boston’s spacing impacting Brown, calling on teammates to make themselves available to the star when he’s on the ball. The Celtics empowered him in that capacity more midway through this month to mixed results, as Brown retains aspirations to become a playmaker, but proved again his best production comes as a finisher. Brown finished the win 13-for-18 from the field, with 54% of his makes assisted and 46% unassisted. Horford won’t usually say anything to Brown after turnovers unless he feels the need to. They all go through it.

“For me, it’s just talking to him,” Smart said. “Positive affirmations. Joe’s going to do the negative affirmations, getting on him, yelling and things like that. That’s his job. It’s my job and our job as a team and as teammates to show him the love, make sure he doesn’t get too down on himself, and anybody on this team when it happens, because we all go through it and it’s not going to be the first time and it won’t be the last time. He’s gonna go through (turnovers) again, but using those moments like tonight, where he went through, to see where he can get better and decrease some of those mistakes, and vice-versa with me and everybody else. You’ve got to learn from it, but knowing that your brothers are with you and not against you is always gonna make it better.”

Brown bristled in the past at questions aimed at his turnovers, acknowledging the shortcomings while clarifying that many Celtics turn the ball over, particularly in the NBA Finals. His aggressive style continues to benefit the Celtics most when tall centers like JaVale McGee and Christian Wood stand in front of the net, Brown inflicting foul trouble or tearing the paint open with downhill drives. Early in Wednesday’s game, Boston scored more points in the paint (16) than Dallas had total (14) on the way to a 27-point lead.

A controlled, tight dribble on the way to the net, prioritizing pace and getting off the ball all aided Brown. As did his teammates, who continue to sense when someone in the room isn’t quite right. Brown brought the criticism on himself by not paying attention to who he endorsed this week, showing frustration at the backlash in a recent Instagram story. But to him, he only showed solidarity with Irving, and didn’t delete the original tweet.

“I think it’s just knowing each teammate, right? What guys need at different times,” Tatum told CLNS. “JB’s no different. As tough and as famous as we all are, we’re all still human and we go through the ups-and-downs of day-to-day life, and I think everybody in that locker room knows, just from a family standpoint, it’s bigger than basketball and we’ve all got each other’s back and we’re all there for each other.”