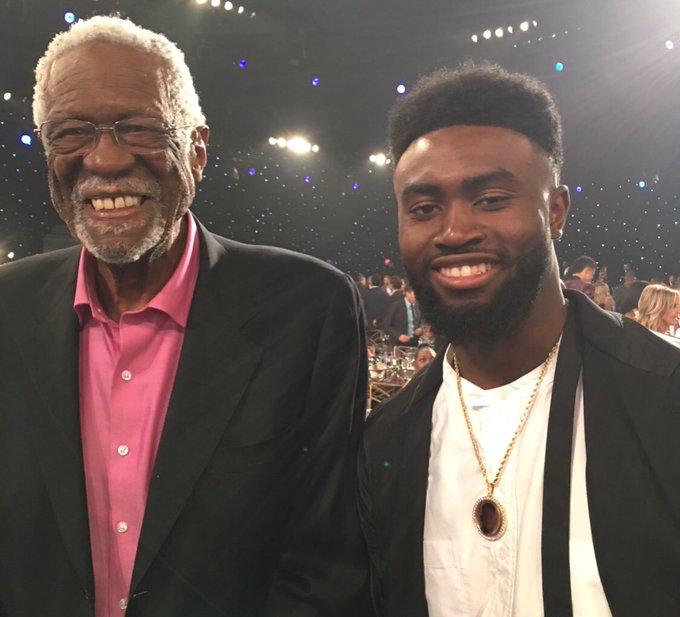 The NBA, US and world are quickly reacting to the death of Celtics icon Bill Russell, who died at 88 this morning. Celtics broadcaster Cedric Maxwell became one of the first to react, calling him a friend and hero.

“He understood the world in a way that we don’t,” Maxwell said. “People call me legend, take that away, Bill Russell was a Celtic legend. I couldn’t carry the man’s jock around, but man did I love him as a player, as a coach, as a person. As great as he was as an athlete, he was much better, a greater person, than he was an athlete.”

NBA commissioner Adam Silver released a statement: “I often called him basketball’s Babe Ruth for how he transcended time. Bill was the ultimate winner and consummate teammate, and his influence on the NBA will be felt forever.”

Jaylen Brown tweeted his admiration for one of the greatest athletes ever and thanked him for everything he stood for. He also tweeted a photo of Russell alongside Jim Brown, Kareem Abdul-Jabbar and other great athletes of the time in support of Muhammad Ali at his summit in 1967.

Rest In Peace 🕊thank you for paving the way and inspiring so many Today is a sad day but also great day to celebrate his legacy and what he stood for 💚 pic.twitter.com/kvDaIsjpGG

The Boston Celtics released a statement: “Bill Russell‘s DNA is woven through every element of the Celtics organization, from the relentless pursuit of excellence, to the celebration of team rewards over individual glory, to a commitment to social justice and civil rights off the court.”

To be the greatest champion in your sport, to revolutionize the way the game is played, and to be a societal leader all at once seems unthinkable, but that is who Bill Russell was. (1/4) pic.twitter.com/K0Ue0hKiLs

Celtics champion Ray Allen posted to Instagram: “Today we lost a giant amongst men. I am so lucky to have shared space with one of the greatest men and greatest basketball players that this world has ever seen. Whenever I was around Bill, I would just sit back and listen to his stories. No matter what story he told, it always ended with his laughter as if I just told a funny joke. Your massive presence on this world was felt intensely and now your absence hurts. Despite Bill Russell winning 11 NBA championships, he played at a time in America where he was not welcome anywhere. Without Bill’s sacrifice, courage, fight, determination, fortitude and unwillingness to accept the story that the world would try to define him by; most of us would never have had the opportunities that have been afforded to us. When NBA players say that we stand on the shoulders of giants, we are talking about Bill and the many greats like him that thrived despite the cruel and constant punishment of racism. Bill was not only just a champion, he was a trailblazer. Bill was not just a dominant force on the court, he was a voice for a generation- an activist and a warrior for human decency. A lot of people talk about changing the world- Bill actually did. Thank you Bill. You were the reason I wanted to be a Celtic. Forever grateful.”

President Barack Obama, who awarded Russell the Presidential Medal of Freedom in 2010, honored the legend on Twitter: “Perhaps more than anyone else, Bill knew what it took to win and what it took to lead. On the court, he was the greatest champion in basketball history. Off of it, he was a civil rights trailblazer—marching with Dr. King and standing with Muhammad Ali. For decades, Bill endured insults and vandalism, but never let it stop him from speaking up for what’s right. I learned so much from the way he played, the way he coached, and the way he lived his life. Michelle and I send our love to Bill’s family, and everyone who admired him.”

Today, we lost a giant.

As tall as Bill Russell stood, his legacy rises far higher—both as a player and as a person.

12 time @NBA All-Star
11 NBA rings
5 MVPs
No 3-point line
No social media
Just played and dominated in a day and a league that was def not soft. @celtics to the core ☘️
RIP @RealBillRussell 😢 #LEGENDARY pic.twitter.com/mG7K1AOfQq

R.I.P Bill Russell. You allowed me to be in the position I am in today and you changed not only the league but the world. Forever 6.

Bulls legend and Hornets owner Michael Jordan released a statement on Russell’s death: “He paved the way and set an example for every Black player who came into the league after him, including me.”

A statement from Hornets Chairman Michael Jordan on the passing of NBA legend Bill Russell. pic.twitter.com/RdYcnuCrmb

Magic Johnson remembered Russell on Twitter: “Bill Russell was my idol. I looked up to him on the court and off. His success on the court was undeniable; he was dominate and great, winning 11 NBA championships. Off the court, Bill Russell paved the way for guys like me. He was one of the first athletes on the front line fighting for social justice, equity, equality, and civil rights. That’s why I admired and loved him so much. Over the course of our friendship, he always reminded me about making things better in the Black community. Despite all of his achievements, he was so humble, a gentle giant, a very intelligent man, and used his voice and platform to fight for Black people. Since the day we met, he mentored me and shared advice.”

I’m heartbroken to hear about the passing of the greatest winner the game of basketball has ever seen, a legend, hall of famer, mentor and my friend for over 30 years, Bill Russell. 💔 pic.twitter.com/iiSkVq2kdn

The world lost a legend with the passing of Bill Russell. His impact on basketball and society will not be forgotten. He handled every adversity with dignity and grace, and walked away a champion. My condolences to his family and those blessed enough to call him a friend.

Thanku for being a trailblazer , pioneer Thanku for setting the bar , for ur kind words of wisdom, Thanku for that great laugh u had . I can go on all day about what u meant to me . Today is a sad day for the NBA family u will be forever missed #6

Thank you for everything! R.I.P Legend 🙏🏽 pic.twitter.com/tn2iGsArav

So very sad to hear about Bill Russell today. He set the standard – on and off the court. RIP to an all-time winner, teammate and person. 🙏🙏 https://t.co/OIzUn8aLwG

The Patriots, Red Sox and Bruins all released statements, with the Sox holding a moment of silence at Fenway Park before their win over the Brewers on Sunday.

A legend and a champion whose impact extends far beyond Boston sports.

Our thoughts are with Bill Russell’s loved ones and the entire @celtics family. pic.twitter.com/WeywK9diPW