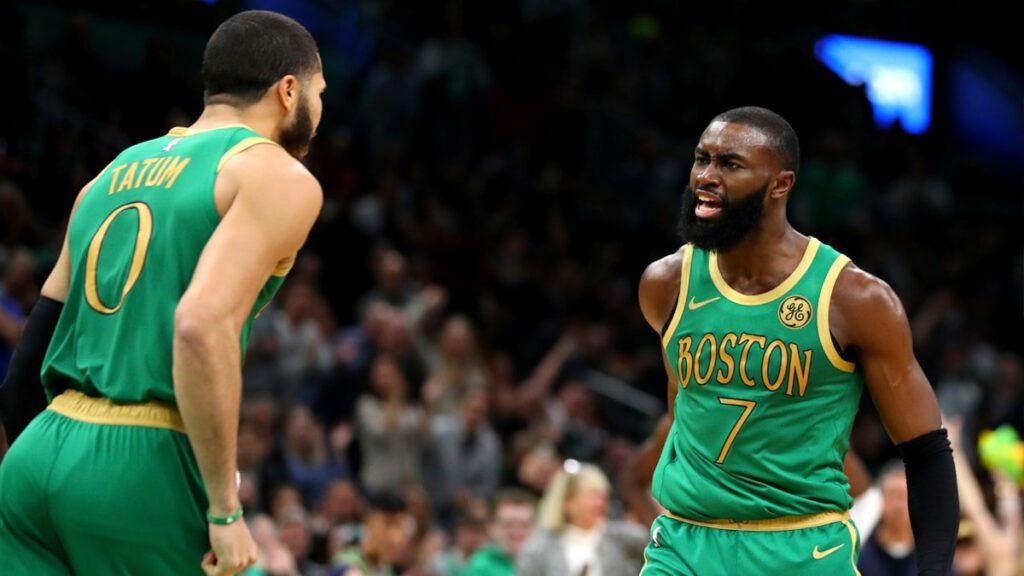 In Jaylen Brown and Jayson Tatum, the Celtics have one of the league’s best young dynamic duos.

The two 20-something-year-old rising stars are cornerstone pieces to their franchise, but before the high-flying dunks, buzzer-beating threes and showstopping plays, they were Danny Ainge’s greatest assets in 2013. After the Big 3 era ran its course, he sent a pair of aging hall-of-famers to Brooklyn in exchange for three first-round picks and a handful of salary-matching, roster-filling players.

Ainge eventually turned those draft picks into Brown and Tatum. And now, the duo is in the midst of the greatest regular season start of their career. 21 games in, Brown and Tatum are forming into a dominant scoring tandem and topped things off with another signature dual performance Friday night against the Nuggets.

They combined for 47 points on 18-of-34 attempts en route to a 108-95 blowout win against a team with one of the league’s best records (14-6). Tatum scored 26 points in under 30 minutes, Brown connected on a slew of shots from deep, and he scored at the rim, including a crowd-rising slam. Tatum screamed with elation following Brown’s loud finish and Brown did the same when he watched his counterpart find the bottom of the net seconds before the end of the third quarter.

“It’s a lot of fun,” Tatum said. “We’re playing hard, we’re playing together and making the right plays. When he’s doing things like that, it’s hard not to get excited.

So far, it’s safe to say that Ainge got it right, and it’s also easy to remember all the different scenarios that would have derailed Friday’s moment at TD Garden. The Celtics president of basketball operations had plenty of opportunities to do things differently.

Before 2016, Ainge could have decided to trade either draft pick for All-Stars like DeMarcus Cousins or Paul George. Anthony Davis to Boston, at one point, was deemed a foregone conclusion for the Celtics but Ainge didn’t take the bait nor the risk, and it’s a good thing he didn’t.

Tatum is on his way to making his first All-Star appearance, making the leap we all envisioned but wasn’t quite sure what to make of that vision — not sure if it was mostly hype or soon-to-be reality. He’s been aggressively attacking the rim, committing to 3-pointers over mid-range attempts and it’s resulted in some epic scoring performances. Friday night was Tatum’s seventh 25-plus point game of the year, he’s averaging 21.2 points.

Brown isn’t that far behind him. He’s a 20-point scorer, making just about half of his attempts — currently shooting 49.6 percent from the field — this season while finding continuity with the first-round pick that came after him.

“Those guys are still getting better,” Stevens said. “They’re clearly improving in a lot of areas but I think they’re really enjoying playing together and figuring it out with the rest of our team. And it’s more fun to be a central player that we’re going to in those occasions, and they’re taking advantage of it and doing a really good job of it.”

For the third straight game, they combined for at least 47 points while averaging 51.7. Aside from Rajon Rondo’s last All-Star appearance with Paul Pierce in 2013, it’s been 17 years since the last time the Celtics sent two homegrown talents to the All-Star game.

Antoine Walker made his first All-Star game before Pierce’s first, back in 2002, which was the year Boston’s duo finished second to only Shaquille O’Neal and Kobe Bryant as the best scoring tandem in the league. Walker was selected in 1996, Pierce was drafted two years later.

Brown and Tatum are in year three and four, respectively, and the chemistry between the two has reached new heights.

“It’s developed a lot, I guess,” Brown said after Friday’s win. “At first, we were cool but at the same time we were totally different so we kind of just did our own thing but as we’ve gotten older it kind of just makes sense. At first, I didn’t like J.T. — nah, I’m just playing.

“Nah, that’s my guy. Good dude, family-oriented and he handles himself the same way every day so you can’t really be mad at anything like that.”

Ainge must have seen this coming. With each players’ stock at its peek, he could have flipped either for the aforementioned candidates or waited until this year’s trade deadline to comb through potential suitors but he didn’t.

Instead, he committed to Brown by inking him to a four-year contract extension and it’s turned the four-year forward into a better, confident, and more consistent player — he’s a believer. For Brown, who opened up about his bout with anxiety, along with other challenges last season, that wasn’t always the case.

Brown saw his role diminished one year ago after losing his starting job while nursing a foot injury, and had to adapt to being a high-usage role player. Now, Brown is not only a member of Brad Stevens’ starting lineup, he’s an integral part of the team’s offense.

And with that comes more accountability for Brown, who understands that his relationship with Tatum is that much more important for the organization’s future.

“I think there’s definitely responsibility, a lot of it is on us so we have to handle that accordingly each and every night,” Brown said. “I don’t think there’s extra pressure that needs to be added to it. Just need to come out here and play basketball and do what we’ve been doing. I think everything will take care of itself.”

The Celtics will have the weekend off before hosting the Cavaliers at TD Garden Monday night.