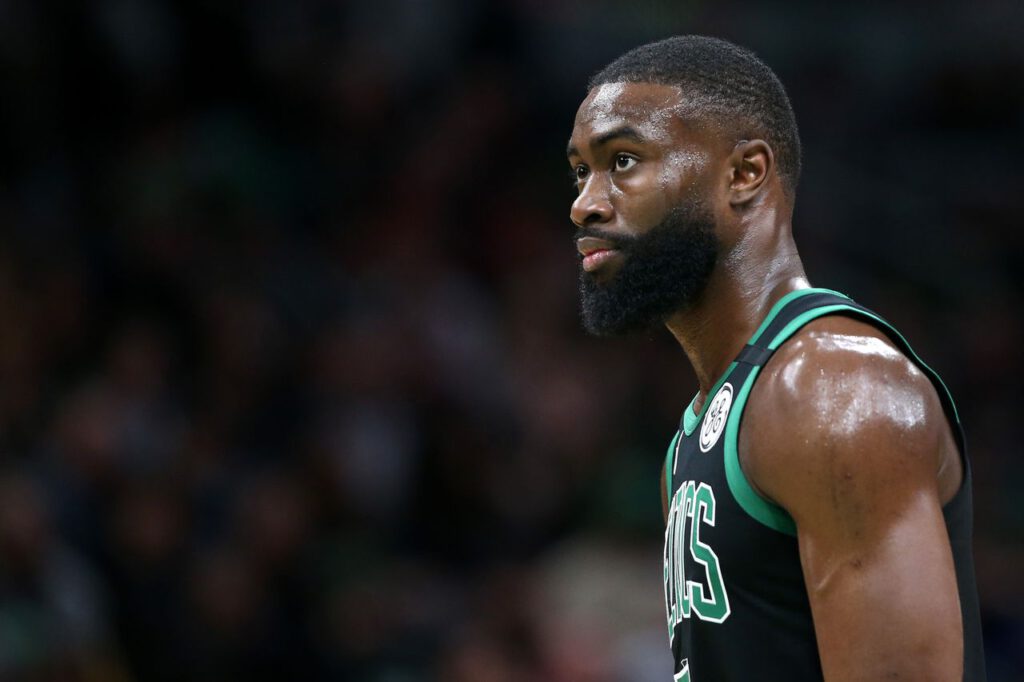 TD GARDEN — Celtics guard Jaylen Brown shared a powerful message on racism in Boston and the United States prior to game 3 between the Celtics and Nets at TD Garden.

Brown, who is out for the postseason after undergoing wrist surgery earlier this month, spoke in response to comments made by Brooklyn guard Kyrie Irving on Tuesday. When asked about the reception he would receive in front of the Garden crowd during Game 3, Irving replied that he didn’t want to hear any “subtle racism” from the Boston crowd.

Since those comments many other Celtics weighed in with their thoughts including Tristan Thompson, Marcus Smart and team President Dany Ainge.

“I have a perspective to share. I have seen the things floating around with Boston and the topic of racism. People around me urged me to share my perspective. I have not talked to anyone — not Kyrie, Marcus or Danny Ainge — about my thoughts or my perspective. I do think it’s a good conversation and I think racism should be addressed, and systemic racism should be addressed in the city of Boston and the United States,” said Brown.

“I do not like the manner it was brought up in terms of centering around a playoff game. It bothers me if the construct of racism is used as a crutch or an opportunity to execute a personal gain. I’m not saying that is the case, but I do think racism is bigger than basketball and racism bigger than Game 3 of the playoffs,” Brown continued. “I want the media to urge that narrative as well. Because when it’s painted in that manner it’s insensitive to people who are dealing with racism on a daily basis. The constructs and constraints of systemic racism in our school system, inequality in education, lack of opportunity and resources, adequate housing and affordable healthcare, tokenism, and the list goes on.

“I recognize my privilege as an athlete, but, once you get to a certain point, nothing you experience overtakes the experiences that people deal with on a daily basis,” he said. “I want to emphasize that as well. I understand the frustration right now. I’ve seen what has gone on in sports and sports arenas with the two incidents with Russell Westbrook and Trae Young. I’m pissed, to be honest. I don’t think we should have to put up with that and I don’t think that’s OK by any means necessary.

“But when I look in the media and see those incidents attached to the frame of racism — yes, it’s important to address those situations, but if the topic is racism, those incidents or belligerent comments don’t compare to what systemic racism is doing in our community and has done in the past. It’s important to frame it in that context,” said Brown.

“I know that every Celtics fan in our arena is not a racist. We have people of all walks of life, ethnicities, colors that are diehard Celtics fans. I think painting every Celtics fan as a racist would be unfair,” he said. “However, Boston, we got a lot of work to do. No question. Incarceration rate is ridiculous. The wealth disparity is embarrassing. The inequality in education specifically in Boston public schools needs to be better. There is lack of resources and opportunity there. The tokenism here in Boston needs to be addressed as well.

“But if we’re going to talk about it and that’s what the media is going to bring up, I think a sporting arena, things might exist, but in the real world things exist to far different extremities,” he said. “I wanted to share my perspective and this is my opinion; people can challenge that. I definitely think Boston, we have a lot of work to do. That is it, really. I just wanted to share my perspective. Thank you.”

Brown made headlines in the past for similar actions. He drove all the way from Boston to Atlanta last year to attend a rally for George Floyd in his hometown. Brown was even named one of the 100 most influential Bostonians this year by Boston Magazine. Brown consistently speaks out about these issues and constantly ensures that racism in America remains a topic of conversation.