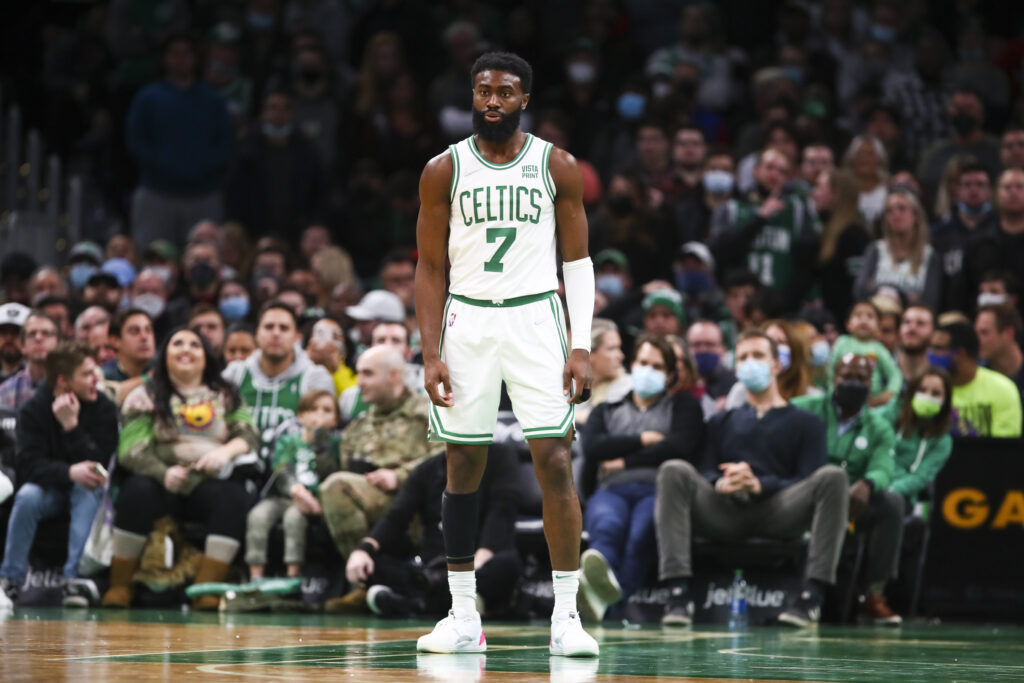 BOSTON, MA - DECEMBER 01: Jaylen Brown #7 of the Boston Celtics looks on during a game against the Philadelphia 76ers at TD Garden on December 1, 2021 in Boston, Massachusetts. NOTE TO USER: User expressly acknowledges and agrees that, by downloading and or using this photograph, User is consenting to the terms and conditions of the Getty Images License Agreement. (Photo by Adam Glanzman/Getty Images)
Share
Facebook Twitter Email

Josh Richardson saw the grabbing, stretching and irritation evident from Jaylen Brown during the Celtics’ 88-87 win over the 76ers on Wednesday.

Brown cleared his pregame tests again, as part of what the Celtics labeled return from injury management, which left Brown questionable for the week following his return from a right hamstring strain that initially cost him eight games. He played five games, limited to 22-27 minutes, before Ime Udoka announced an increase against Philadelphia.

Jaylen Brown not in uniform, getting shots up an hour ahead of tip-off. Moving a little gingerly. He said he didn’t feel anything in his hamstring until the game started, then it became tight.

He’s day to day going forward, but still has a chance to play tonight pic.twitter.com/F54NDxLJ3l

Boston ramped-up his minutes limit over 30 on Wednesday, and Udoka said Brown could handle more if the Celtics needed him to clinch a late win. It took until the final possession, as Brown closed in on 34 minutes switching onto Joel Embiid in the post, to close the Sixers out. Brown felt more tightness in those moments that didn’t alleviate after the game. He’ll now miss Friday’s meeting with the Jazz, and possibly Saturday’s in Portland, as Boston monitors how he feels in what appears to be at least a speed bump for the star. Udoka didn’t consider it an aggravation or a setback.

“He went through all the progressions of rehab and build-up,” Udoka told CLNS Media at shootaround on Friday. “Although he wanted to come back at Atlanta and the Lakers, we were cautious and felt we went about it with the right timeline. Adding to that the minute restrictions, we feel good about it. There’s going to be some natural soreness, if you haven’t played for week or games. It’s hard to emulate a real-time NBA game in workouts and rehab. As long as he felt good the next day, soreness is natural, tightness is going to be natural at times. Then if you feel a little bit more after the game, that’s when we’ll start to take a deeper look at it and that’s what we did after last game.”

The Celtics initially attacked the injury with caution, Brown undergoing an MRI that showed its severity, and Boston held him back even as he reportedly pushed for a return as early as Nov. 15 at Cleveland. Brown’s history of hamstring injuries played into that approach too. Once he rejoined the starting lineup against Houston last week, it came with the qualifier of questionable status for the next week or so.

Brown said after that game, where he shot 6-for-13 with 19 points in 22 minutes, that he entered feeling good throughout the day before tightness set in during the second half. Two days later, against Brooklyn, he felt better and hasn’t spoken with the media since. When Udoka received questions about Brown’s status afterward, including Wednesday, he said Brown hadn’t complained about anything and his staff didn’t see anything concerning.

“I wasn’t super happy with how my body felt out there,” Brown said after Boston’s win over the Rockets.

Brown and Udoka stood side-by-side coming out of halftime as the Celtics and 76ers awaited repairs to the hoop, stretching his right leg back and feeling in the area, which he did for much of the night. He grabbed it during an offensive possession in the third quarter when he got bumped in the post. He pulled his right leg backward behind the basket in the first quarter after hobbling through the baseline following his drive and Tyrese Maxey’s foul.

Other times, Brown didn’t push himself when it wasn’t necessary, like after getting stripped by Seth Curry taking a defensive rebound up the floor and turning to see if he had a chance to chase down Tobias Harris. He carried that same careful stride through his warmup before the Celtics-Nets game last week, where he gave his hamstring one final round of shots before officially becoming active for the second straight game. Udoka had said he saw no lack of burst from the forward.

“This is a little bit of a nagging injury, I’ve had hamstring injuries a few times now,” Brown said last week. “This one seems to keep lingering a little bit, but I’m confident in the next coming days I’ll get back to 100% and we’ll get back to adding to winning. This group has played extremely well while I’ve been. I’ve seen a lot of steps forward from a lot of guys. That makes me excited about our potential … just trusting the medical staff and building out a plan. I don’t want this to lead to any other injuries that it possibly could. Just taking the right precautions and the right measures to get back to being myself out there, and I think I’m for sure moving in the right direction.”

At times on Wednesday it seemed like Brown was managing more than playing, and that’s why I’m curious why he returned this past week. He didn’t seem comfortable even if he did show flashes of good play. pic.twitter.com/5rf3O8yDyb

”We’ve listed him as questionable, day-to-day. That’s how it’s going to be going forward coming off this injury,” Udoka said. “We’ve increased his minutes and he’s felt good at times, better, and then he had that tightness, so we’re being cautious there. A few days of rest and we’ll reevaluate him tomorrow … I think he may have tweaked an ankle, achilles, something late on the final play, so it may have showed him hobbling more because of that. It’s a thing we’re going to have to monitor … the severity of it and we’ll just read his body and how he feels, especially after an increase in minutes.”

Brown, otherwise, sat for an October game in Houston with knee tendinopathy and dealt with knee, hip and shoulder ailments earlier this year, before wrist surgery ended his season. In the past, Brown missed a week in March, 2020 before the COVID-19 shutdown with a right hamstring strain. He also injured it to end the first round of the 2018 playoffs, resting Game 1 against Philadelphia, then returning to average 15.3 PPG in a 4-1 series win. Those bounce-backs initially inspired the Udoka that Brown would bounce back in a reasonable amount of time, at one point saying that Brown’s ailment wasn’t a long-term issue.

Now, it appears the hamstring recovery could continue to loom over the team’s difficult west coast trip, and December schedule ahead. It’s a notoriously nagging injury, even approached with caution.

“Any muscular injury is super touchy. You never know when it’s all the way ready. You can always tweak it a little bit again, knock on wood,” Richardson told CLNS Media on Friday. “It’s tough having Jaylen out. He’s a big part of what we want to do, but when he comes back I think that the guys did a good job of fitting back in and helping him find his spots. I think he did a good job. I think he brought good energy, and I saw him grab at it a couple times, but that’s natural for your first game back from a hamstring.”