Jaylen Brown and the Celtics breathed another sigh of relief post-game rather than cheering on a resounding comeback and historic performance. Reasonably so. 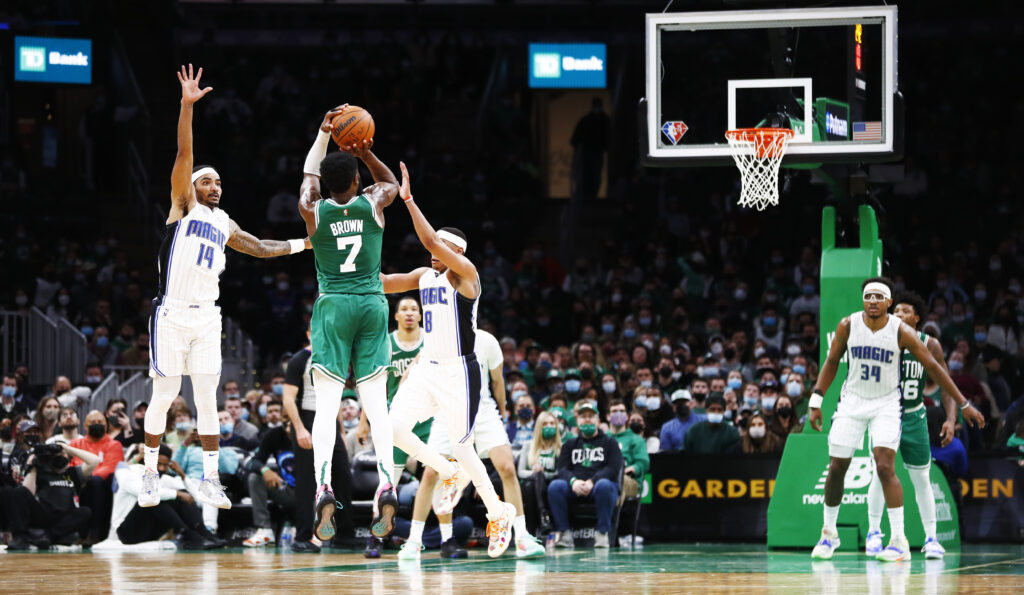 BOSTON, MASSACHUSETTS - JANUARY 02: Jaylen Brown #7 of the Boston Celtics shoots over Tim Frazier #8 of the Orlando Magic during the fourth quarter at TD Garden on January 02, 2022 in Boston, Massachusetts. NOTE TO USER: User expressly acknowledges and agrees that, by downloading and or using this photograph, User is consenting to the terms and conditions of the Getty Images License Agreement. (Photo by Omar Rawlings/Getty Images)
Share
Facebook Twitter Email

BOSTON — Jaylen Brown’s scoring prowess shined as he saved the Celtics from a potentially horrendous loss to a short-handed, 7-29 Magic squad, Boston winning 116-111 in overtime on Sunday.

Brown’s 50 points on 19-for-29 shooting ranked among some of the most efficient scoring games ever, with 21 coming in the fourth quarter, where he shot 9-for-12. He scored 21 of Boston’s final 25, turning around a 14-point deficit with 4:20 remaining on an 18-4 run, invigorating a crowd that booed the Celtics a quarter earlier when they fell behind double-digits.

Trade envisioners beware. Brown’s career night solidified his ability to single-handily carry his team and stand among the greats. His 50-point, 65% FG performance was the 138th in NBA history, a list packed with 23 such Wilt Chamberlain performances, and a handful from LeBron James, Michael Jordan, Benard King, Kareem Abdul-Jabbar, Shaquille O’Neal and Steph Curry.

That Brown needed to do that remains the problem with both he and the Celtics. He committed a career-high seven turnovers, setting a tone for sloppiness on a night where Boston gave the ball away 21 times, establishing their double-digit deficit. Disconnected — without a reliable facilitator — they let their star do it all and that was good enough. This time.

“You can’t expect to get that lucky every time,” Brown said. “We gotta execute and be better …”

“Despite some of the bad games I might’ve had, bad reads I might’ve done, Ime’s trusted me and put the ball in my hands to make plays for myself and for my teammates. I can’t do more than appreciate that. I know it’s some good days and bad days, but imma continue to grow by being in those positions. I feel like I can help my team down the line.”

Brown’s scoring does that, and then some, for now. His passing flashed late, almost too late. He hit Josh Richardson in motion, a scary attempt going behind the back in a key spot that worked, then Al Horford in the corner to slam the door on the Magic in overtime.

Before that, he posted only two assists through four quarters, getting himself going by getting off the ball, cutting and finding the rim following passes from Marcus Smart and others. There, sheer power got him three and-ones in the fourth alone.

On-ball, Brown fumbled possessions throughout the game, repeatedly losing control of the ball and he even double-dribbled. Jayson Tatum’s absence ascended Brown to one of Boston’s main ball-handling roles this past week and he struggled, turning it over six times against Minnesota, six more versus Phoenix, before tying his career-high in turnovers Sunday. He now has 62 assists (2.7 APG) and 74 turnovers (3.2 TOV) this season.

Dennis Schröder credited Brown for staying aggressive to open up his own scoring, and although that did allow Brown to persevere past his early miscues, the most endearing trait about his 26 late points was that they came without a turnover. The Celtics, too, drilled Brown on ball security recently in Ime Udoka’s patented film sessions.

“It’s been up and down, to be honest,” Udoka told CLNS Media, assessing Brown’s playmaking progress this season. “He knows that. We’ve watched quite a bit of film lately of these past few games when Dennis and Jayson were out and he has the ball a lot more. At times it looks really good, at times he’s in natural score mode and he kind of gets tunnel vision there.”

“It’s a work in progress,” Udoka continued. “It’s something that you are who you are throughout your life. It’s not going to change overnight, but we want him to grow in that area. He’s receptive to the coaching … and you see it translate in certain games, even the Clipper game. He didn’t get any assists that game because of missed shots, but it was a very conscious decision to not play in a crowd and get off the ball. You see growth and carryover from the film session. I think he’s getting more comfortable with guys being out and now it’ll have to carry over when we got guys back and he’s still playing in that same role. Not just scoring mode, but playing the right way in general.”

Brown watched entire games, one impactful session in recent days coming alongside assistant Joe Mazzulla, and he will need to dive into his career performance as well to see where he could’ve found teammates. He’s watching how defenses guard and react to him. Sunday, he remembered looking up and realizing he had reached the high-40s of scoring after aggressively attacking the paint on eight of his 12 fourth-quarter attempts. He only knew nobody on the Magic could stay in front of him. Brown played more hesitantly earlier in the game, Udoka noticing him overthinking rather than playing free as he did late, at times not even sure he’d bring up the ball.

That played out on the final play of the game too. Brown launched a long two-pointer before the clock expired in a 100-100 game, leaving 1.8 seconds in the fourth when Wendell Carter Jr. caught the rebound. The Magic, as they did all night, bailed the Celtics out and simply launched a full-court shot that didn’t come close after a long stoppage, but Brown had handed them an opportunity to win due to his inexperience on-ball late.

Smart joked with Brown about his early miscues in an effort to get him to relax, saying Sunday he and Brown are closer than they appear, talking and joking that way all the time. Smart, the best ball-handler and passer on the team, has needed to defer to Jayson Tatum and Brown in part due to necessity, the best scorers on the team need the ball in their hands more often.

Part of it is growth, Brown especially has rarely done this before. Tatum, with time, got better at it. Mix in Schröder, Richardson, Al Horford and Robert Williams III, who dished 10 assists himself, the Celtics are loaded with playmakers, but don’t have one who the team can regularly rely on to calm things down.

“It’s dependent on the game,” Schröder told CLNS. “At the end of the day turnovers are always not good, I don’t want to say you can’t be aggressive and turn the ball over, but at the end of the day you want to make sure you get a shot every single time when we go down the offensive end. I think they had, at halftime, 13 more shots than us, because we turned it over nine times in the second quarter … (Brown) had seven turnovers, but scored 50 and helped us get a W, so we’re gonna move forward from that. We got a lot of people that can make plays. So just to pick and choose on offense, move the ball side-to-side, and then whoever got the ball make a play, for somebody or for yourself. It’s been great and I think we’ve made strides over the course of the season and we’ve got to just keep getting better at that.”

The Celtics again leaned into that self-assuring talk post-game. They’ll figure it out. It’s a new year.

Individuals —  Brown, Schröder and Smart — all felt comfortable saying it’ll work out. Why not? Brown set the rim on fire. Schröder scored the first five points in overtime seeking his own shot. Smart drove downhill aggressively, the best connecter with seven assists, but not always empowered in that role. If he was, he said earlier this year, he’d handle it. But what will connect all these efforts?

Even with 25 assists as a team on 39 makes, those came as a product of hammering Orlando’s porous defense. A better offense than the Magic’s would’ve taken advantage of the takeaways and won, Orlando shooting 1-for-5 following the Celtics’ turnovers late in the second quarter, with the other fast break botched by a take foul.

Ball security, recently, became the mark against the reliability of Boston’s playmakers. Right now, the Celtics seem entirely dependent on who their ball-handler is, and they all have their own individual limitations that are currently capping this team’s ceiling below the full measure of its talent. How can good guard play, explosive wing scoring and a solid pair of centers, with some young wings, amount to a team under .500? All those pieces trying to solve this individually, rather than together.

“We’ve shown that we can compete with whoever, with tons of guys missing, as we have done, and beat some really good teams,” Udoka said. “Then, we have quarters, like tonight, where we look like we’ve never played together. And maybe it’s because we haven’t at times.”