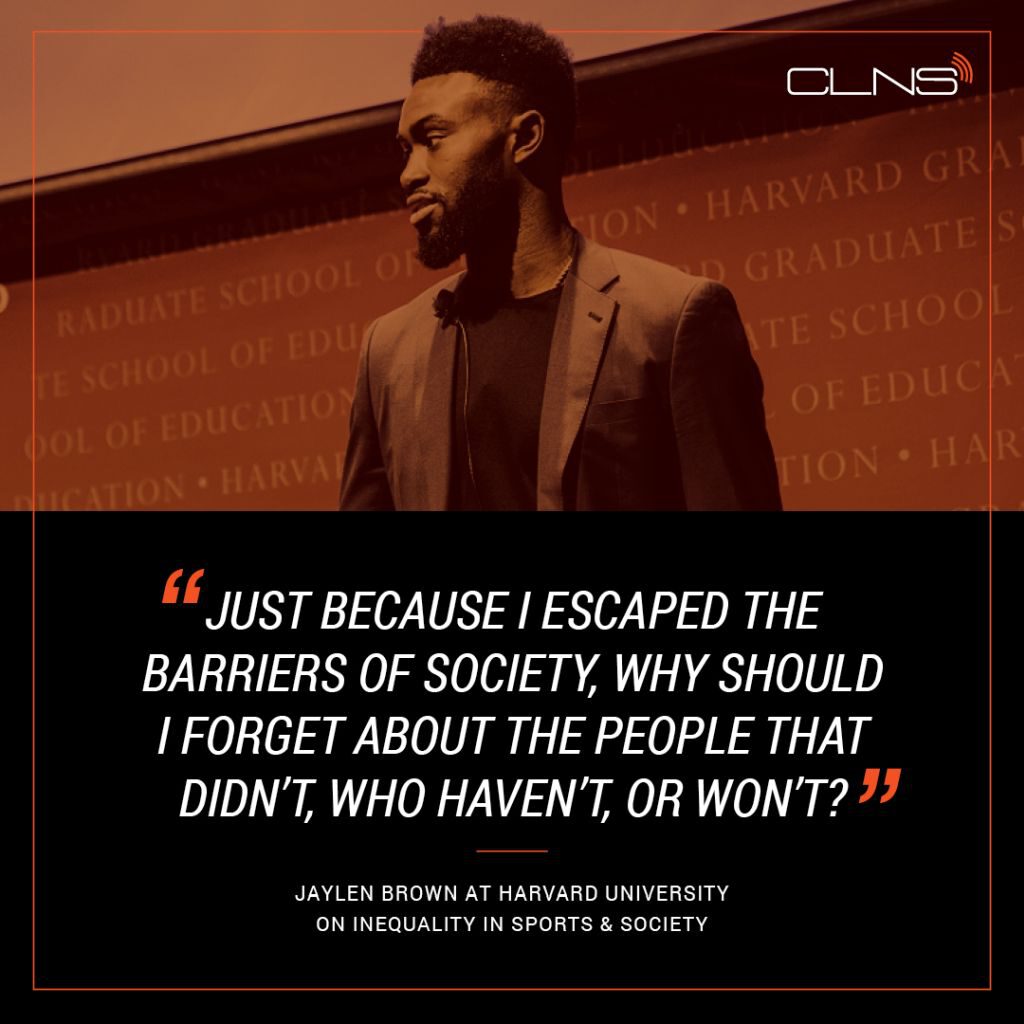 He wants to see changes in the educational system, and progress in how black athletes are perceived by the media, and shared his views at one of the most prestigious universities in the country.

Development was a common theme Thursday evening in Longfellow Hall at Harvard University, where Brown spoke on inequality in the school system, social stratification, and the influence of black professional athletes. While there is a level of push-back when black pro-athletes like Colin Kaepernick and LeBron James speak out on social and political issues, it’s still important for them to utilize their strong voices is what Brown believes in.

Instead of following the “shut up and dribble” mantra, Brown’s approach is to encourage youngsters to educate themselves. He talked about when he first learned about the infrastructure set in school systems around the U.S. and how it had a profound effect on him.

While speaking on his personal life experiences, Jaylen says he cried the day he learned that school systems in low-income communities aren’t structured the same way as systems in other public schools.

“I remember flipping through my reader as I’m reading my first assignment in my education class,” Brown recalled. “They were talking about hidden curriculum, social stratification, and I’m like ‘man, I know this but I just didn’t know a term for it.’ I experienced this but I just had no idea it was going on and I remember tears — I was so emotional about it. I felt like someone pulled a fast one on me. I felt like for the first time in my life, I wasn’t in control. This thing had been going on my entire life through education and I didn’t even know it existed.”

Brown continued his discussion on the educational system and what he learned as an undergrad at the University of California. While pacing back-and-forth on stage with an iPad full of notes in his hand, he wondered just how different his life would be if it weren’t for basketball.

Application is the key, says Brown.

Brown vows to do his best to keep things moving forward, and may spark a conversation that players around the league will start to have. He credited his mother and grandmother for instilling education in his household while Brown, like many of his peers, grew up without a father.

However, Brown was slightly different from his peers. Behind closed doors he read books and wrote poetry while basketball kept him away from the dangers of his surroundings.

Jaylen spoke about how certain circumstances affected kids around him and how it can stray one from their path. He credited sports as a great tool to not only keep students focused but can also be used as a bridge to higher learning — where Brown says he was able to spread his wings and express himself in a way that wasn’t socially acceptable back in Georgia.

It was in Berkeley, Calif. where he was able to spread his wings. While learning about himself, Brown also learned from his experiences, something he believes can’t be taught and is of course different for each and every individual.

When he addressed inequality in sports, he dismantled the notion that black athletes are given an advantage over white athletes because of their genetic makeup. Brown used LeBron James as an example of a black athlete who is often described as a “beast” or a “man-child; body of a man, mind of a child” in regards to his physique and his intellect, whereas a white player like J. J. Redick is labeled as a player who is “so technical, so smart” or “a student of the game.”

Spectators in the jam-packed auditorium then applauded the second-year pro. Brown concluded the forum by answering questions asked by college, high school and elementary school students of different races and backgrounds.

They were given the opportunity to ask questions before Brown spoke to the media shortly after the event.

Click the video below to see what he had to say to Celtics reporters following the event.