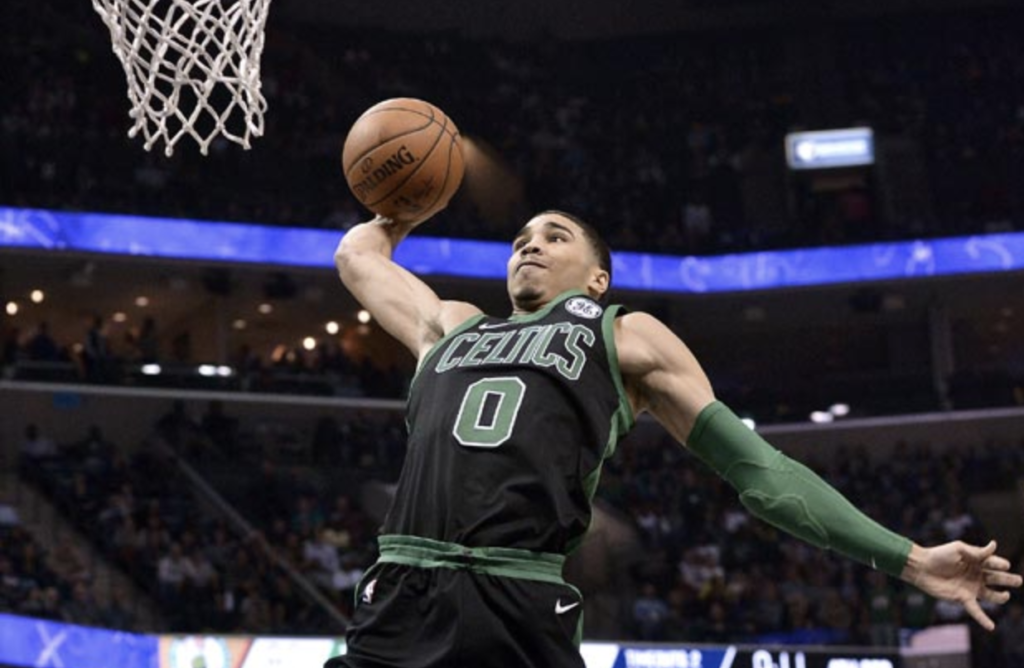 Both the Celtics and Knicks were on the second leg of a back to back on Saturday night.

Ultimately the Celtics prevailed 103-101 in a rock fight. One in which Gordon Hayward did not play (more on that in a minute) Aron Baynes left the game early (more on that too) and Kyrie Irving had another miserable shooting night (his second in 3 games.)

But it wasn’t all bad.

Of course we’re going to completely overlook his unbelievably bone-headed foul on a 40 foot 3 point attempt with 2 seconds remaining that could have tied the game. But it ended up not mattering so we’re going to let it go. Mainly because it spoils the narrative.

Tatum was pretty much the only Celtic who resembled a professional basketball player on this night. He had 18 points and a career high 13 boards through 3 quarters. He was dead silent in the 4th until the very end of the game when he scored back to back buckets. A drive the lane one handed slam off a loose ball and then an ice-water in his veins fallaway with the shot clock winding down and 20 seconds to play that put the Celtics up 3.

Tatum finished the night with 24 points and 14 boards. There are many people who believe the 20 year old will soon be the Celtics best all around player. Through 3 games he might already be there.

Tatum legitimately could lead the Celtics in scoring this season. https://t.co/cHU5ccgqZw

Gordon Hayward not playing tonight wouldn’t be a big deal it were all part of the plan to ease him back from left ankle surgery.

Hayward was supposed to play but was held back by the team’s medical staff after he experienced ‘general soreness’ in his ankle following Friday’s 113-101 loss to the Raptors in Toronto. Stevens said the team isn’t “overly concerned.”

“Just had a little soreness this morning, nothing big,” Stevens said.

No reason not to take Stevens at his word but to hear Hayward, ankle and soreness in the same sentence does not inspire confidence. Especially considering how not like himself Hayward has looked to start the season.

The Celtics also lost Aron Baynes after he left the game in the 2nd quarter with an apparent hamstring injury. No update from the team on if he’ll miss any time and how much.

For a while this portion of the column belonged entirely to Kyrie Irving who had another poor shooting night going 5-16 from the field. But Kyrie regained his powers late in the 4th and made the plays needed to win. The hi-lite; a ridiculous Uncle Drew crossover split the ‘D’ and slip by 3 Knicks defenders to cap a 7-0 run and give the Celtics some breathing room late.

Irving  finished with 16 points on 5-of-16 shooting but it’s been a slog for him so far through three games trying to get back to his old self. There are glimpses, but we haven’t seen a classic Kyrie game. Not yet.