Jayson Tatum set an NBA Finals record for assists in a debut, spinning 13 passes to his teammates for scores while he shot 3-for-17, marking his growth. 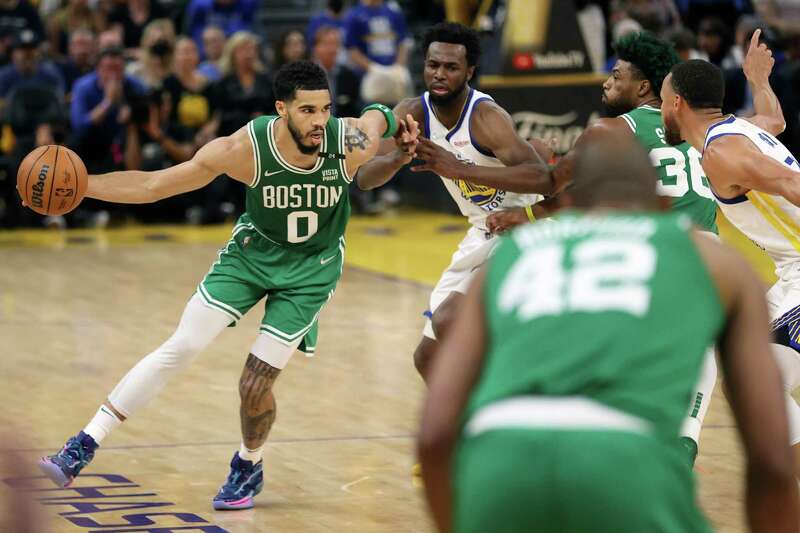 SAN FRANCISCO — Ime Udoka had experience exploiting the worst habits of Jayson Tatum and Jaylen Brown as an assistant coach on the division rival 76ers and Nets over the past two seasons. Challenges he’d already observed head-on as one of Brown and Tatum’s assistant coaches on Team USA in the 2019 World Cup. That’s the earliest moment Udoka imagined how he might solve them if he became their head coach, though it stayed unsaid.

“Maybe not as far back as the World Cup, but definitely since Ime’s been here, he’s definitely put the ball in my hands more than any other point in my career,” Brown told CLNS Media on Thursday. “I’ve made leaps just by getting that experience.”

Making Brown and Tatum better ball-handlers and primary facilitators became Udoka’s mission statement as a first-time coach. Nearly one year to the day Boston hired Udoka, Tatum dished 13 assists in a 120-108 comeback win to take a 1-0 lead over the Warriors, an NBA record by a player in their first game in the championship series. Not Magic Johnson, Jason Kidd, LeBron James or Isiah Thomas. Jayson Tatum. He scored or assisted on 38 points, piecing together a stringing together a performance Udoka dreamed of three years ago.

Some of Tatum’s best passing nights stemmed from his worst shooting performances during his fifth NBA season. The 0.5-second offense Udoka implemented relied on Tatum to keep the ball moving. Pressure he drew, among the 20 players who saw the most double teams this season, not to mention drops, zones and a box-and-one on Thursday, forced him to impact the game as a passer despite his natural scoring pedigree. Shooting his way out of slumps, attacking one-on-one and searching for foul calls didn’t work through a .500 start after a .500 2021.

“We’ve talked about it throughout the year and I’ve talked to him at length about impacting the game when he’s not having his best offensive night,” Udoka told CLNS after the win. “So he did that tonight, obviously going 3-for-17, it’s usually not going to happen, but what he did well and did early was get others involved. Seven or nine assists pretty early in the game, finished with 13, and his shot’s not falling and he still attracts a good amount of attention, he made the right plays and I love his growth and progression in those areas where he’s still guarding on the defensive end, getting others involved, not pouting about his shots and trying to play through some mistakes and some physicality that they were playing with him. When they went in a box-and-one on him, tried to take him out, that made it tough at times, but that’s why we’re a team. We don’t rely on one guy and saw others step up tonight.”

Beyond Tatum’s 2-for-8 start, Steph Curry’s 6-for-7 first quarter explosion from three spun an ominous start to the Finals as Golden State did its best impression of its most dominant runs through its dynasty. But the Celtics left Curry wide open on one of his entries into the zone, and most of his other makes coming on miscommunications by Boston guarding screen action and off-ball movement. Al Horford and Robert Williams III lagged too low. It somehow looked like the Celtics just woke up from a nap that started in 2013, before the rise of the Warriors. Marcus Smart shouted at them in timeout to stop guarding the Warriors like the Heat in an early timeout.

The Celtics weren’t quick to wake up. The turnovers started flowing into the second quarter, somehow only facing a four-point deficit after Curry’s onslaught. Tatum led sharp offensive sets that kept producing open shots, even if the Celtics leaned in on the three ball, 11 of their first 12 shots coming on jumpers. Boston seemed poised for a shooting competition with the franchise that reshaped the game from deep. They’d somehow win, burying 21 threes to Golden State’s 19, trusting their personnel away from Tatum.

“All year, leading up to this, we’ve been kind of grooming and preparing Jayson for these moments where teams are going to key in on you so much, they’re going to try to take you out of the game. You have to be able to make plays and affect the game in other ways,” Smart said.”We preached that all year, he’s had a lot of practice at it. For us, it’s just to make sure he stays confident and let him know that even though they’re doing a good job on you, you’re still who you are. We got your back. That’s what we’re here for, to help you when times get like that, to open things up for you to get going. The pick-and-pop, Jayson does a really good job of setting the screen and we’re good making the reads. We’re basketball players. We take what the defense gives us.”

When they’d give the ball away, the Warriors gave it right back, turning over six possessions in rapid succession after the Celtics botched three of their own in the second. Ball control became a defining flaw for Boston through two turbulent rounds prior to this one. It almost called into question the Celtics’ facilitating-by-committee approach. Thursday’s win showcased all the benefits to attacking in layers.

Unlike the Nets, Bucks and Heat, Udoka said, who could be taken out through their stars, the Celtics don’t want to rely on Tatum’s scoring to win. Tatum predicted he wouldn’t shoot so poorly again post-game, but added he’d fine with it if Boston won.

“(Udoka’s) message from day one was just to challenge me to be the best player that I can be, and improve other areas of my game,” Tatum told CLNS. “We watched a lot of film throughout the course of the season, just areas and things I could improve on. Obviously, playmaking was one, drawing a lot of attention. Just help the team out as much as possible. He’s done a great job of challenging myself and the group in that aspect.”

The pandemic provided more time for those one-on-one sessions when a winter surge of the virus sheltered the Celtics to more one-on-one time and an emphasis on film. Brown took advantage and went overtime in them, while Udoka honed in on Tatum’s offense dictating his defense. Officiating became a Tatum obsession, while shots not falling during his 41.7% start to the season through the new year worsened the star’s demeanor, Tatum getting taken out of games mentally by his struggles. Poor decision-making plagued the Celtics’ fourth quarters as the team sunk to one of the worst performers in the clutch. Boston blew games by settling for jumpers early in the shot clock.

Tatum, in some ways, couldn’t win. When he passed more, teammates struggled to convert shots and his scoring-focused stretches drew a selfish label from some. The Knicks loss in January, Boston’s worst all year, might’ve been one of Tatum’s best as a passer. His assist numbers lagged despite a few standout performances in that column that continued to flash the promise he’d long shown as a passer.

Udoka urged patience. Change wouldn’t happen overnight. He found himself needing to repeat his mantras, telling Tatum not to play in a crowd, to trust teammates and play with pace. General messages about the team sounded particularly pointed at the leader. The team needed reminders about when they looked at their best.

Tatum shot 1-for-9 through arguably the greatest second-half turnarounds in NBA Finals history. The trust he developed in teammates, in getting off the ball quickly after collapsing the defense and the leaps his vision took over the past year allowed him to create or assist on 38 of Boston’s 120 points, including the 40 in the fourth that won’t get forgotten anytime soon. He started the night making passes diagonally to shooters when he saw the help floating into the lane. Smart benefited from two early feeds from those positions, while the Warriors played too far off Horford and Derrick White on their first three-point tries. Foreshadowing the fourth.

The Celtics trailed by 12 points after Andrew Wiggins, Kevon Looney and Curry lit them up in the third quarter. Tatum started the comeback by stepping aside. Brown grabbed the ball and attacked, firing up seven straight points capped by a lob to Williams III, cutting the lead in half in 45 seconds. Despite Draymond Green’s assessment that Golden State dominated most of the game, Boston only trialed by as many as 15 points.

The Warriors sent Andre Iguodala downhill out of timeout, who flailed against Williams III in the lane and threw the ball away to Brown, who darted up the floor and hit Payton Pritchard for a layup. Brown kept creating for himself off the dribble, trading shots with Iguodala, Green, Curry and Klay Thompson. Four straight shots could only keep the Warriors ahead by three as Tatum hit Pritchard with a wraparound pass from the post for a three. Then, Brown dribbled, dribbled, dribbled and dribbled in the left corner against two defenders. The shot clock fell to five as Otto Porter and Wiggins creeped into the lane away from White. Brown found him at the last second from the left block to the right wing, and Boston pulled within one.

“Sometimes I make the wrong read, I’m human, I make mistakes,” Brown told CLNS. “But I feel like if you put the ball in my hands, more often than not, Imma put ourself in position to win and tonight I got going in the fourth quarter, I made some really great leads and was able to go on a run to help us win the game.”

White knew coming into the series the Warriors would sag off him and prepared to fire away, catching another pass from Brown on the next trip down, pump-faking as he saw Curry draw close. He leaned his shoulder into Curry, pulled up over him and buried a three, Damon Stoudamire and Celtics assistants visually wowed on the bench.

Chase Center deflated like a balloon moments later when Green missed two free throws, and Boston went off on its signature 17-0 run, Horford grabbing Green’s pass attempt and burying a three the other way, hitting a pick-and-pop jumper on the baseline from Tatum, then feeding Smart for a second chance three the other way. Horford himself broke LeBron James‘ record for a player his age in the Finals with six threes in his first try.

The Warriors offense shut off. The Celtics led by 13 points and Tatum backed out, let Smart screen for him and spun one more diagonal pass his way for assist No. 13 and Finals win No. 1. Boston swung the game around by a historic 27 points in 11 minutes — leading 120-105 late as Chase Center emptied — and did so without Tatum hitting a single shot in the fourth quarter.

“We don’t expect J.T. to have a tough shooting night like that again. I don’t know if you attribute that to jitters or some of the defense they were throwing at him,” Udoka said. “But it shows what we are, which is a team.”