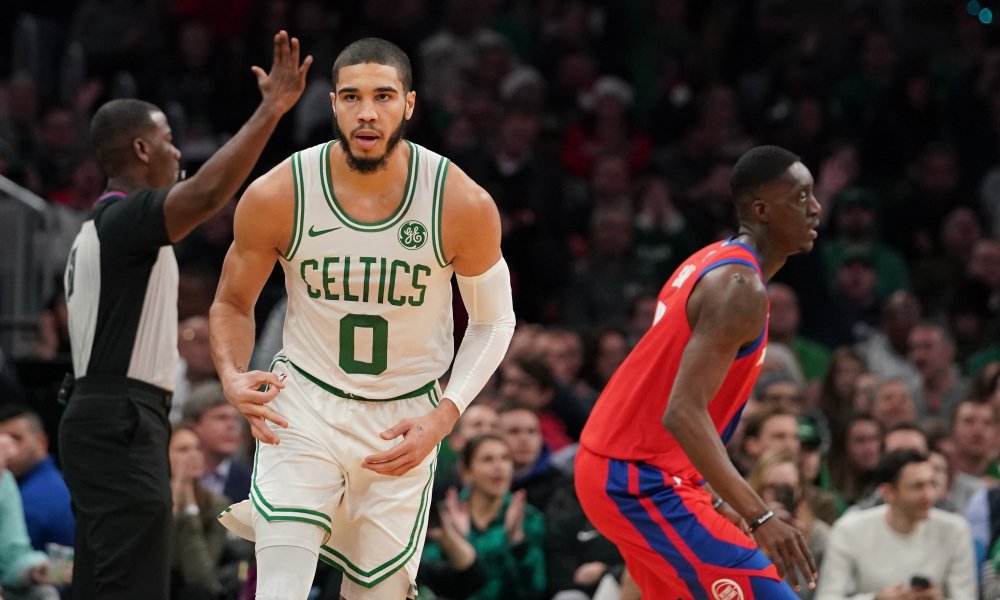 With a dash of home cooking, coupled alongside two electrifying performances, the Celtics had a blast Friday night at TD Garden.

It started with Jayson Tatum’s 13 first-quarter points, continued with one of the best sequences we’ve seen all year, and ended with Tacko Fall making his thunderous regular season debut in Boston. Brown turned one 3-pointer into two within seconds off a steal on a Pistons inbound pass and then converted a four-point play two possessions later.

It was a fitting ending to a spectacular half from Tatum and Brown, the two combined for 34 of Boston’s 60 first-half points. The first half wasn’t a model effort from a team’s standpoint by any means, the Celtics were sloppy early and often — which led to a whopping 15 turnovers in the opening 24 minutes. Still, a combined 52 points from Tatum (26) and Brown (26) while Boston shot at a 52.3 percent clip was enough to close out the Pistons in blowout fashion, 114-93.

“I thought Tatum came out extremely aggressive in the first quarter,” Brad Stevens said following Friday’s win. “Jaylen went on that flurry at the end of the second, obviously. Part of that is, again, you’re going to choose your matchup. Maybe you switch it up halfway through, if one gets going. There’s a lot of versatility in scoring with those two. They can both put it on the ground, they can both get to the rim; they’re both aggressive. They were really good tonight.

“It wasn’t Kemba (Walker)’s night but everybody on our team contributed to winning. I think everyone on the team knows that we’re doing a lot to center ourselves around three guys while we’re not healthy but they all gave us a lot.”

Without Blake Griffin, Reggie Jackson and Luke Kennard, six Pistons scored in double figures, including Thon Maker (15 points, 7 rebounds), who led Detroit with a team-high. Maker and Derrick Rose (14 points) led in scoring off the bench while Andre Drummond grabbed a team-high 11 rebounds.

The most exciting part of the night came in the final frame, when Tacko Fall first checked in. It was his regular season appearance at home and suddenly TD Garden turned into a playoff-like atmosphere in December.

It didn’t take long for Fall to find his first field goal in the post, which led to a standing ovation. He finished with five points in 4:31 while Grant Williams put the finishing touches on a season-high 18 point performance — he led the Celtics’ bench.

For the second straight game against an opponent playing without its best player, the undermanned Celtics struggled at certain times offensively — which led to a season-high 20 turnovers — but still managed to correct their flaws in the second half behind efficient scoring and defensive stops in the third quarter. It was the kind of win that may have not been as easy elsewhere but a two-game homestand against a pair of bottom-feeding Eastern Conference teams just before a marquee Christmas Day matchup in Toronto is a good place to be if you’re the Celtics.

It was a good way to gauge a player’s development and how they’ve adapted, thus far. 26 games in, a shorthanded roster can often bring a team closer together and for the 2019-2020 Celtics, that’s certainly been a focal point of the season — it’s one that’s blossomed organically and continues to strengthen.

Friday night showed players on their feet cheering each other on. Whether it was Williams making only his third 3-pointer of the season, Daniel Theis making a defensive stop on Drummond or Fall converting his first field goal at home, you see a level of togetherness that you don’t see on every NBA team. It’s embedded in the fabric of the team’s culture while the Celtics continue to thrive and turn in comfortable wins since their two-game skid.

With another favorable matchup ahead, the Celtics will enter TD Garden Sunday with a chance to squeeze out three consecutive wins and an opportunity for guys like Williams, Enes Kanter and Brad Wanamaker to continue to carve out meaningful roles off the bench that could elevate the Celtics to another level just in time before guys like Marcus Smart and Gordon Hayward eventually make their return.