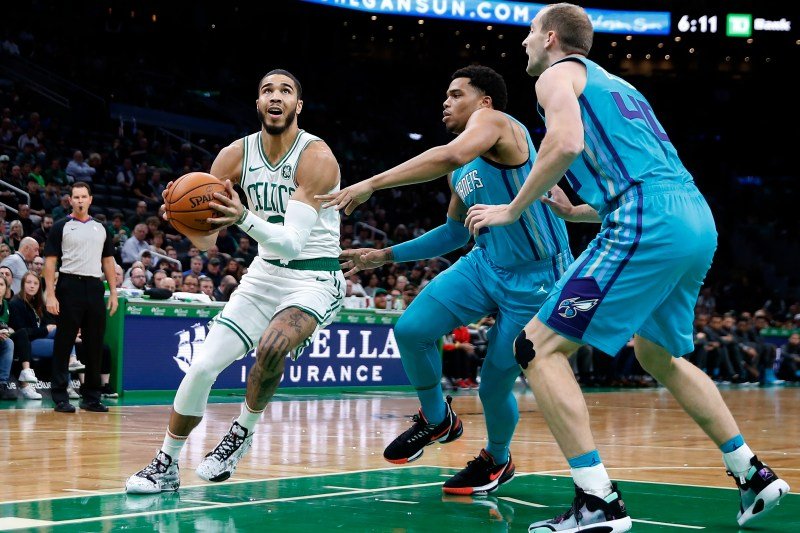 There was plenty of buzz surrounding Sunday night’s game between the Celtics and Hornets, more than one would expect from a preseason matchup.

For the first time in four years, Terry Rozier entered TD Garden as a member of the visiting team, Kemba Walker not only played in a Celtics uniform for the first time but he did it against the only NBA squad he’s ever played for prior to Boston, and fans waited for less than an hour before they started a “WE WANT TACKO!” chant. Meanwhile, through all the commotion and hoopla Jayson Tatum put together a stellar performance that led the Celtics to a 107-106 win over the Hornets.

He finished 8-for-14 from the floor, including 3-of-8 from deep on his way to 20 points. Tatum was solid in his offensive approach — a well-balanced attack of transition offense where he got to the rim for easy buckets and precisely picked his spots from behind the arc.

“Without looking at stat sheets or anything else, I think he did a really good job,” Stevens said. “He attacked when it was appropriate to attack. I thought he shot his three without hesitance, which is really important. The three will open up his drives, and open his opportunity to land and an opportunity to go to the free-throw line. That is one thing he told me when we met, we got to throw all the narratives out about are you getting to the foul line? Are you shooting threes?

“Just make the right play, right? Because if you do that then everything else takes care of itself and he has the talent to take advantage of that.”

At Celtics Media Day, Marcus Smart noted that Tatum isn’t thinking as much as he used to — something Smart thinks led to second-guessing and uncertainty. Tatum was showing signs of that over the summer in the FIBA World Cup games before a left ankle sprain kept him sidelined until training camp.

Still, there was very little hesitation Sunday night as Tatum only needed 23 minutes to put together a solid 20-point game.

“It was just good to be back out there,” Tatum said. “We played with each other against somebody else for the first time. We’ve been battling hard these last couple days, especially when it matters being so good, being back playing. You know I got hurt and I’m happy to be back playing basketball.”

The Celtics will continue its preseason schedule Friday night when they travel to Orlando to take on the Magic.