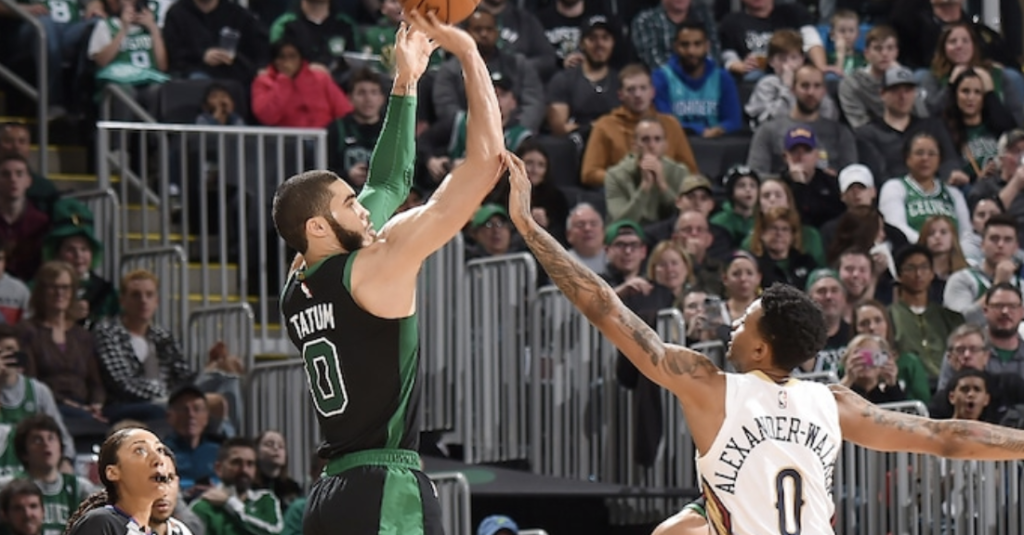 BOSTON — The Celtics entered Saturday night with a season-long three-game losing streak and a lack of any noticeable momentum that would lead one to believe they were ready to turn things around.

Then two things happened. The 14-win New Orleans Pelicans came to town on the second night of a road back-to-back and Jayson Tatum found his scoring touch to the tune of a career-high 41 points.

The Pelicans won’t be around to kick to the curb every night the way they were Saturday in Boston’s 140-105 cakewalk that improved them to 26-11. But Tatum, if they are to make any serious run at staying in the upper half of the Eastern Conference standings, showed what they will need to stay within earshot of the Bucks and Heat.

“Shots were going in. It felt good,” Tatum told me. “Felt like we played with a purpose today on both ends from the beginning of the game. Starters came up and did their job. We haven’t been playing well lately. Felt good to start the game off right.”

“I mean, he was really good, obviously, but I thought the game started with he and others attacking the basket,” coach Brad Stevens noted after his star wing finished 16-of-22 from the field and 6-of-9 from 3-point range. “And more importantly, the ball hitting the second side of the floor a lot, which we needed. It’s a huge emphasis going into today. And then, you know, I thought he made the right play and obviously made a ton of shots.”

Tatum’s game was downright historic Saturday. He became the first Celtics player ever to score at least 41 points and make at least six threes while shooting 72.7 percent from the field. Tatum, who didn’t play at all in the fourth quarter, is the first player with 41 points and six threes in 30 minutes or less since Larry Bird on Nov. 9, 1984.

The other huge factor Saturday? Enes Kanter off the bench. He became the first Celtics player since Ed Pinckney in April 1994 to collect 19 rebounds in a game. The 19 boards along with his 22 points made for one of the more remarkable double-doubles of the season, his sixth off a Celtics bench that has been looking for an identity all season. Those numbers were the most by a reserve since Larry Bird (yes Larry Bird) came off the bench in an oddity on March 16, 1982.

“We were focused,” Kanter said. “We were really focused obviously after the three losses. It was very tough for us and I think we were just watching a lot of clips and just went to the basics. We were just going to go out there and put more effort in. Everybody was focused and we just went out there and had fun.”

Saturday night may have been one of those “layup” games for a superior home team like the Celtics clearly were. But in a game like that sometimes the most important lesson doesn’t come in the victory but the opportunity to show everyone on the team what good basketball looks like again when you’ve lost three straight.

“Well first of all, I mean, they were obviously, you know, second on a back-to-back, short-handed. But he’s been pretty consistent with his ability to score in the paint and – and rebound the ball. And I joked with him that would go back in there and miss one and pad his stats and then put it in – and he did. But, I don’t think he did it – I don’t think he did it on purpose but I at least enjoyed that for myself. So, he’s a really good rebounder and he’s got a wonderful tough. That’s the thing that we’ve seen, certainly, in the last two months.”

Danny Ainge may or may not be able to add a big man to the mix before the trade deadline in February. If this is the core group that Stevens has to work with then what we saw Saturday night needs to serve as the blue print for the rest of the season. The Celtics need to get out on the break, pressure opposing defenses by getting to the basket and pressure the ball defensively, the way they were able to against a road-weary opponent in the Pelicans.

The Celtics are still in terrific shape in the standings at 26-11, even after a three-game skid against Washington, San Antonio and Philadelphia. And they have been very good offensively for the better part of the season.

“I said this (hours before tipoff) that there’s not a lot of panic in our building the last three games,” Stevens told me. “I mean, we would’ve liked to have played better Washington and San Antonio. You know, Philly I thought we did a lot more good things than bad. So we felt like we were heading in the right direction.

But what the last three game showed Stevens and his staff is what happens when this group lets its collective guard down and stops attacking the basket.

“I think you have to keep doing it. I don’t know about correcting it. There just has to be a conscious thing; some days it feels better than others because the ball’s going in,” Stevens said. “But today was really two things on the board: pressure the ball the way we want to pressure the ball on defense and get the ball to the second side.

All you needed to see from Tatum was the way he played in the first 90 seconds of the third quarter. He created enough space for himself to knock down a three and then he picked the pocket of Brandon Ingram and coasted in for the easy layup 15 seconds later. At that point he was up to 27 points. He finished with 19 points in the third quarter and 41 for the game, resting the entire fourth quarter as he didn’t get the chance to make a run at 50. That’ll come some other night.

“I just think he’s going to be ever-improving,” Stevens added. “He had a couple of really good finishes with both hands early in the game. And but he also, I thought, had the right mindset attack. It helps when you start off these forty-point games with a couple of layups, which he got.

“Couple off his effort, couple off bigs sealing for him, and then he got a couple steals and now the basket feels a little bit bigger and some of those threes go down. But the finishing’s going to be really important. And we’ve talked about – we’ve talked a lot about how best to do that, but I think he’s had a great year. But I think he can get better.”

And so, too, can the Celtics. And Saturday night was the blueprint.