Jayson Tatum’s 41 Points is Another Step Towards NBA Stardom 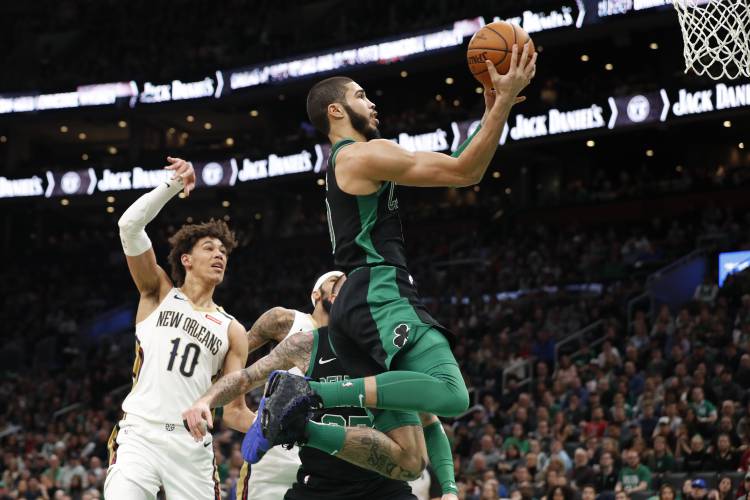 For Jayson Tatum, the 2019-2020 campaign has been the season of his emergence.

It’s the season the third-year forward has used to bridge himself into NBA stardom. Across the board, Tatum has reached career-high averages in nearly every statistical category, including points, rebounds, assists, steals and blocks per game.

And when Tatum found himself in a bit of a slump at the start of the calendar year, the Celtics suffered — they surrendered three consecutive losses. However, Tatum responded to the skid in the same manner every NBA All-Star typically performs — with a signature performance.

He scored a career-high 41 points against the Pelicans in a 140-105 blowout win Saturday night at TD Garden. Most impressively, it only took him only 22 shots to get there — he shot at a 72.7 percent clip from the floor (16-of-22) to go with his six rebounds and four assists. He also did it in only three quarters as Tatum sat out throughout the entire final frame.

Tatum also netted a career-high six 3-pointers from behind the arc — where he established his outside touch and took his game to another level after halftime. He poured in 19 third-quarter points, weaved through the Pelicans’ defense unscathed and finished strong at the rim.

“Shots were going in,” Tatum said after the game. “Felt good, felt like we played with a purpose today on both ends from the beginning of the game. Felt like we did our job, we haven’t been playing well lately so it felt good to start the game out right.”

The brightest stars tend to reach the 40-point plateau every week or so in this league. James Harden did it twice last week, Anthony Davis scored 44 the week before that and Giannis Antetokounmpo has a few to his name this season.

Tatum’s goal is make sure nights like these happen more often.

“Obviously, it feels good, for sure,” Tatum said. “But I never get too high or too low when I play well or if I don’t. For me, I feel like we have a long way to go. The guys I look up to, they have nights like this more often than not. So obviously it feels good but I’m just trying to do it more often, be consistent, just continue to get better. After tonight, just have to forget about it and look for the next one.”

Tatum’s first All-Star selection is almost a certainty at this point. Averaging 21.3 points, 7 rebounds and three assists for one of the league’s top five teams should be enough to get him there — it’s also a significant leap from his numbers of last season when he averaged 15.7 points, 6 rebounds and two assists.

His effort on the defensive end of the floor has also dramatically improved, especially his help-defense and in one-on-one matchups. He finished with three steals against the Pelicans and is averaging a career-high 1.4 per game, thus far.

Tatum also etched his name into the Celtics’ history books, becoming the first player in franchise history to score 41 points, including six 3-pointers while shooting at least 72 percent from the floor in a single game.

Next up, the Celtics will host the Bulls at TD Garden Monday night.