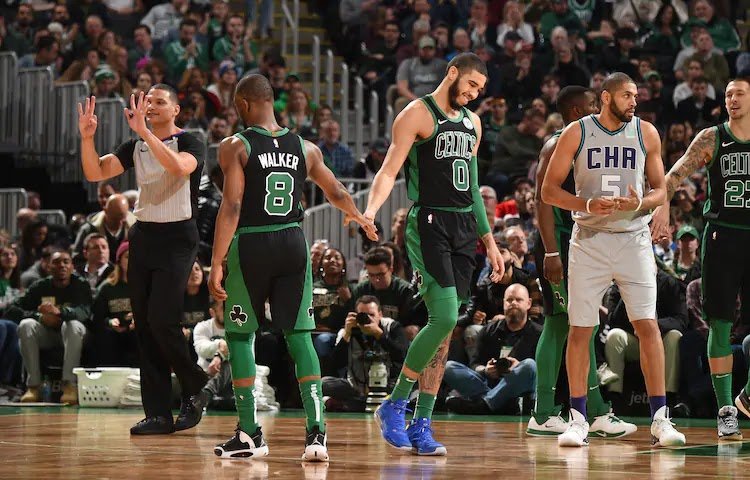 When Terry Rozier’s reverse layup at the end of the third quarter trimmed the Celtics’ lead down to seven points Sunday night at TD Garden, it triggered a sense of urgency from one of Brad Stevens’ best players.

For Kemba Walker, the feeling was familiar. One year ago, Walker found himself on the wrong end of large deficits countless times throughout the regular season and if he and the Hornets were up by seven heading into the final frame, then it was Walker’s job to seal the win.

It was typically his cue to turn things up a notch offensively, be aggressive and take matters into his own hands — his performance would oftentimes determine the result of a game. This year, that hasn’t always been the case.

Walker couldn’t buy a field goal against the Pistons last Friday night — he finished the night with two free-throws and went 0-for-6 from the floor. Still, the Celtics managed to crush the Pistons in a 21-point blowout.

And this time against the Hornets, he got to sit back and enjoy his teammate steal the show in the fourth quarter. Jayson Tatum, who has morphed into an All-Star caliber player, saved his best for last Sunday.

He lit the Hornets up for 22 fourth-quarter points, including 3-of-5 from deep and tallied up a career-high 39 points as the Celtics topped the Hornets, 119-93. Tatum not only had his first game of scoring 30-plus points while pulling down 10-plus rebounds (12) but he also became the first Celtics player since Larry Bird to do so while also making four threes and adding three blocks and one steal to his stat line. This is the kind of help that Walker signed up for.

Tatum’s play certainly reminded him of that against the same team he spent eight years playing for. Still, is being a member of the Celtics everything Walker thought it would be?

“It’s everything,” Walker replied. “It’s good. Like I said, I just had two points (Friday night); we won. What can I complain about?”

With the second-best record in the Eastern Conference and winners of 12 of their last 13 home games, there aren’t a lot of answers to Walker’s question. One thing that’s for sure is Tatum’s development is vastly trending in the right direction.

He’s making the proverbial leap beyond NBA stardom, a plateau Walker says is just the beginning of Tatum’s overall trajectory.

“Nobody’s seen nothing yet. Kid is strong, man,” Walker replied when asked about Tatum’s stellar performance. “He’s a future All-Star in this league. I’m looking forward to watching him grow, continuously. As a player, he’s definitely going to be one of the best in this league one day.”

Celtics head coach Brad Stevens has recently been pushing Tatum to expand his game, he wants Tatum to continue to aggressively beat his opponents off the dribble and get to the rim more often. Stevens, of course, enjoyed what he saw Sunday night against the Hornets, specifically, Tatum’s offensive approach.

“We’ve talked about the need to drive the ball, the need to continue to put pressure on people off the bounce and to the rim and I thought he did a good job of picking his spots there today,” Stevens said. “He had a couple of great opportunities in the mid-range that were really good shots that actually didn’t go down for him. But he — I thought — he chose when to shoot it right and then attach at other times and obviously he’s got the little side-step and different moves to get the three off.

“He’s done a great job and I was really happy with our team for, like, you know, finding him because as he got hot they were locked into him and I think that’s a good thing.”

For Tatum, the rhythm flowed naturally throughout the night. It was difficult for him to pinpoint why his offense came so easily in the fourth quarter, instead, he gave credit to his teammates for their contributions — which ultimately made things easier for Tatum to get going.

“It felt good just to see some shots go in,” Tatum said. “We were getting stops in that fourth quarter, which lead to me being able to bring the ball up. Enes (Kanter) did a great job of screening, as well as Grant (Williams) did. Everybody contributed tonight.”

Walker finished with 23 points on 8-of-16 from the floor, including five 3-pointers to go with his four assists, Jaylen Brown stuffed his stat line (16 points, 9 rebounds, 5 assists) and Grant Williams led the second unit with 12 points. Second-year guard Devonte Graham tallied a double-double (23 points, 10 assists), Bismack Biyombo added 18 points and Rozier, who made his first regular-season appearance at TD Garden since signing with the Hornets, added 14 points and four assists.

Next up, the Celtics will kick off NBA Christmas Day when they take on the Raptors Wednesday afternoon.

The Backlash of LeBron James Vs. Isaiah Stewart

Can the Celtics take the East?