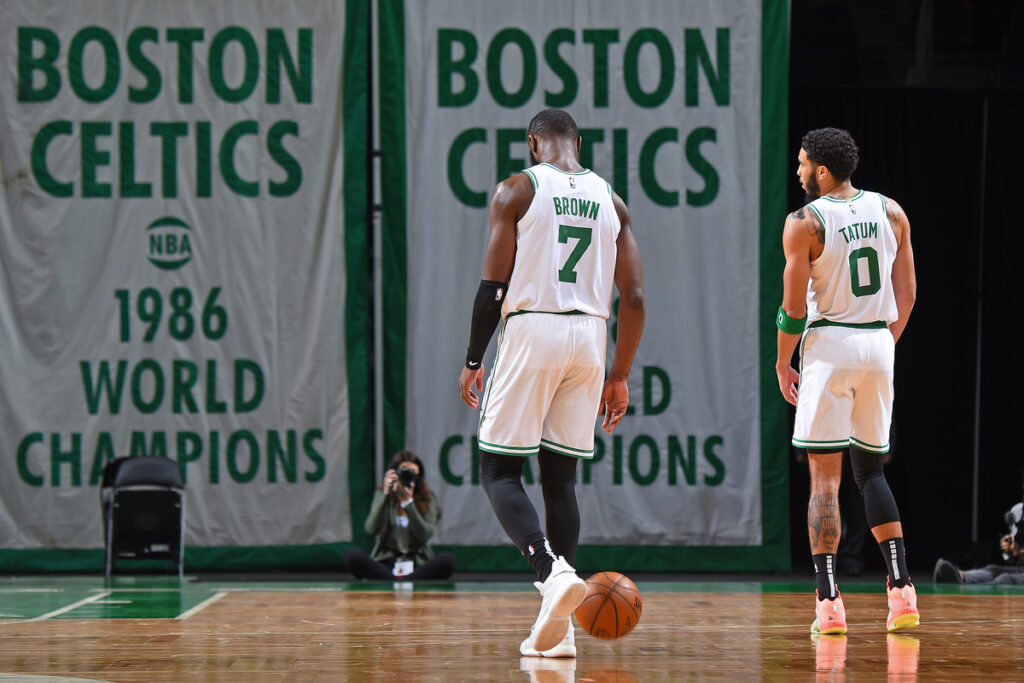 BOSTON, MA - JANUARY 8: Jaylen Brown #7 and Jayson Tatum #0 of the Boston Celtics looks on dg/ against the Washington Wizards on January 8, 2021 at the TD Garden in Boston, Massachusetts. NOTE TO USER: User expressly acknowledges and agrees that, by downloading and or using this photograph, User is consenting to the terms and conditions of the Getty Images License Agreement. Mandatory Copyright Notice: Copyright 2021 NBAE (Photo by Brian Babineau/NBAE via Getty Images)
Share
Facebook Twitter Email

This season has been a rocky road for the Boston Celtics, and unlike the ice cream, there’s been nothing sweet about it. The C’s currently sit under .500 and project to be fighting for the play-in by the time the season wraps up.

Health has been a major factor, though, as the Celtics have been affected by COVID-related absences more than any team in the 2021 calendar year. Jayson Tatum, Al Horford, Grant Williams, and more have missed time in health and safety protocols. Combine that with injuries to Jaylen Brown and Robert Williams, and the injury bug has hit the Celtics hard.

However, Gary Tanguay joined the crew on the latest Bob Ryan and Jeff Goodman Podcast on CLNS Media with an interesting stat to present:

“Here’s a note I saw in The Globe from Adam Himmelsbach. With Tatum, Jaylen Brown, Al Horford, Marcus Smart, and Rob Williams. They’ve only played 87 minutes together over eight games this season, outsourcing opponents by 20.6 points per 100 possessions.”

While this group hasn’t played much together, they’ve been phenomenal when they are all healthy. The ever-optimistic Ryan revealed his reaction when he saw the statistic.

“I arched a major eyebrow when I read that. I said, “Oh, maybe there’s still hope.” So I’m going to remain optimistic that they can be better if they ever get those guys together.”

While Ryan may be trying to stay positive, Goodman took a different approach. He rolled his eyes when Ryan spoke about his optimism. Goodman is tired of using injuries as an excuse for this Celtics team.

Injuries have plagued the Celtics for the better part of four seasons now. Whether it’s been Gordon Hayward, Kemba Walker, Williams, or Brown. But the C’s have also had plenty of time to put things together with the time they’ve spent together on the court.

For this reason, Goodman has seen enough. According to him, this version of the Celtics is not going to work unless one of two things happen:

“I know this doesn’t work until they get a point guard in. Or until Jayson Tatum and Jaylen Brown learn to play together.”