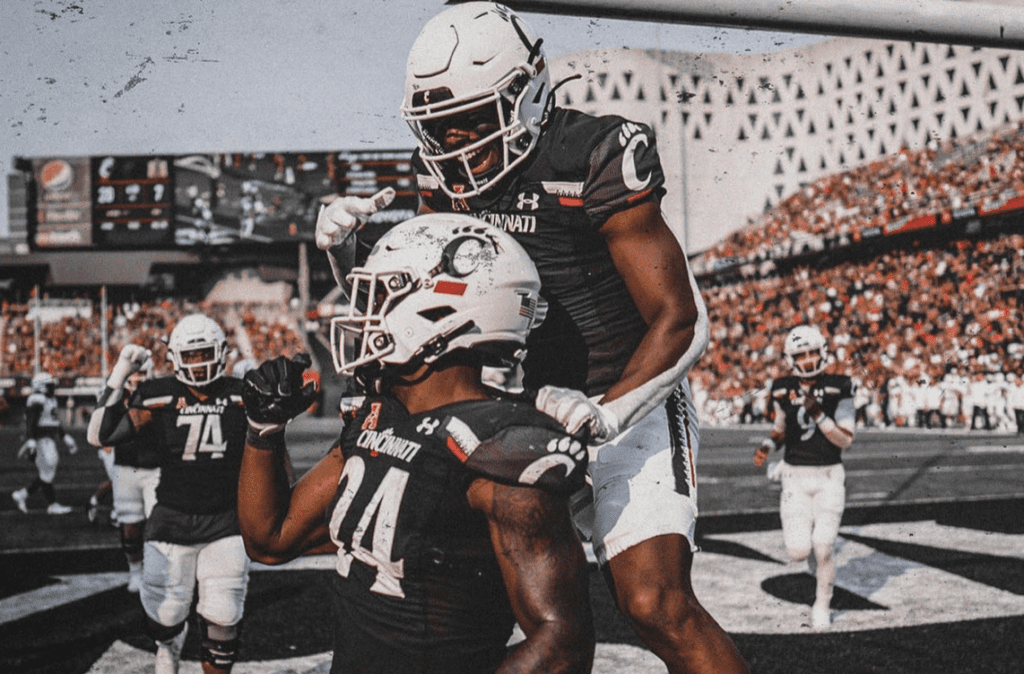 CINCINNATI – There was no 21-point first quarter on this Saturday. There was no 35-0 halftime lead. Desmond Ridder wasn’t piling up Madden numbers on this day.

The seventh-ranked Bearcats got all they wanted from the Murray State Racers before pulling away in the second half for a 42-7 win before 33,498 at Nippert Stadium. The Bearcats scored 42 unanswered points as Jerome Ford, the Alabama transfer running back carried 18 times for 113 yards and three touchdowns. Ridder overcame a shaky first half to finish 14-for-22 for 243 yards and two touchdowns.

It was the last home game for UC before they go on a two-game road trip that will determine whether they will indeed be in the conversation for the national playoff in December.

Next week, they play at Indiana and then, after a bye week, comes the biggest game in recent program memory and perhaps the most important in their history when they travel to South Bend for a showdown with the No. 9 Fighting Irish at Notre Dame Stadium on Oct. 2.

Saturday’s game with Murray State started just as the final gun sounded on No. 3 Ohio State, which lost at home to No. 12 Oregon, 35-28, at the Horseshoe. Cincinnati played the second half like a team that wanted to assert their will.

TRAGS VIDEO RECAP: No. 7 UC races away from Murray State 42-7 to win their 22nd straight at Nippert. pic.twitter.com/8rcduoU4RQ

They opened the second half with a 10-play, 75-yard drive that consumed the opening 4 minutes, 55 seconds, capped off by a 13-yard run up the middle from Jerome Ford to give UC its first lead. The play of the drive came from Ridder, who found Tyler Scott on a key 27-yard completion on deep in-cut on third-and-8 down to the Murray State 18. Ford would later add a 3-yard TD run to make it 21-7.

The Bearcats knew they were in for a battle when Murray State marched down the field on the opening drive and moved into the red zone, only to have Ja’von Hicks save them for the time being with the first of three first-half interceptions of Preston Rice in the end zone.

Their All-American quarterback couldn’t get into any rhythm whatsoever in the first half, thanks in part to the domination of the clock by the Murray State offense. The Racers held the ball for all but 90 seconds in the first quarter and 21:53 for the half.

In the half, Ridder was just 4-for-9 for 38 yards and a 2 yard dump TD pass to Noah Davis that came on fourth-and-goal. It was a desperate play for a Bearcats offense desperate to get something going against Murray State.

"It kind of fired us all up to hear him pop off like that." Jerome Ford on QB Desmond Ridder halftime speech. Ridder also admitted his new role as feature back is a little "nerve-wracking." pic.twitter.com/q9YwVFEzLf

The biggest highlight of the first half for UC was their secondary. In addition to Hicks’ pick of Rice in the end zone, Bryan Cook tipped a pass that was picked off by Ahmad Gardner on Murray State’s third drive. That interception at the MSU 40 set up Ridder on a short field and provided the spark for UC’s only score of the first half.

Arquon Bush stepped in front of another Rice pass on the far sideline that killed MSU’s ensuing drive. But that pick would only lead to a 37-yard Cole Smith field goal attempt that went wide left.

The game began on an ominous note for the Bearcats when Justin Harris and Taj Ward had to leave after colliding covering the opening kickoff to Murray State.