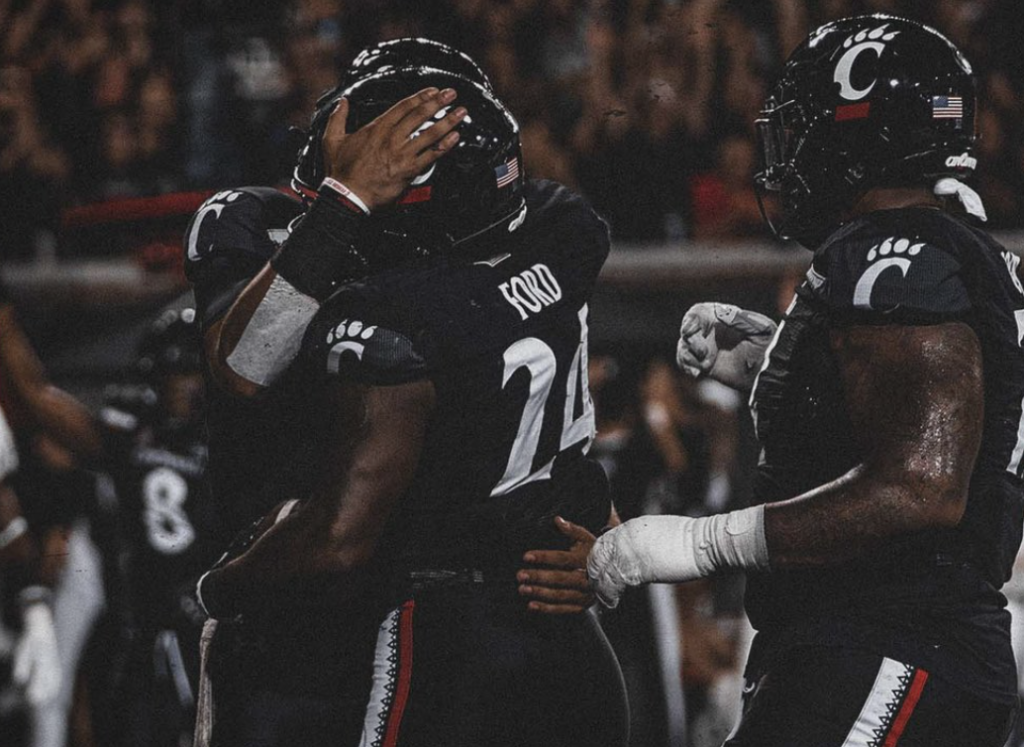 CINCINNATI — It was almost to be expected.

The fifth-ranked Bearcats, coming off their historic win at Notre Dame, looked sluggish at times in the first half Friday night in their Nipp at Night tussle with unranked and overmatched Temple.

UC’s biggest opponent on this night was themselves, at least for 30 minutes.

Then Jerome Ford ripped off a 75-yard run on the first play from scrimmage of the second half and the Bearcats outscored Temple 28-0 in the third quarter to cruise to a 52-3 win before a capacity crowd of 37,978 on “Blackout Night” at Nippert Stadium.

Ford, the junior transfer from Alabama, finished with 149 yards on 15 carries and two touchdowns. UC outgained the Owls, 536-226, including 277 yards on the ground to just 76 for Temple.

That's how you start the 2nd half pic.twitter.com/INvMhup9Fd

All-American quarterback Desmond Ridder was held in check in the first half, settling for just one touchdown pass to Alec Pierce. He could’ve had more, as Michael Young Jr. dropped a pass at the Temple 1 on third down late in the second quarter.

Ridder’s pass to the right to sophomore Tyler Scott led to a dazzling run after the catch, including an ankle-breaking move on a Temple defender at the 10 before cutting back to the middle of the field to finish off a 38-yard touchdown. That was set up by Ahmad Anderson Jr.’s muff of a punt at the Temple 40.

Charles McClelland ran up the middle from 28 yards to make it 38-3 and Ridder finished off the third-quarter outburst with an 11-yard slant to Young on third down to make it 45-3 heading into the fourth quarter.

While the Bearcats led by just 14 points and their offense sputtered at times, the defense was another story. They allowed Temple just 14 yards rushing in the first half and 81 total in the first 30 minutes.

The highlights included an acrobatic catch by Alec Pierce, who continues to impress through the first five weeks of his senior year. He went up and over Temple corner Cameron Ruiz and caught a nine-yard pass in the end zone for UC’s first touchdown and a 10-0 lead.

Ford showed bursts when he actually was given the chance to show off his skills against the Temple front. Ford only had nine carries in the first half for 49 yards, but one of those nine was an eight-yard burst up the middle for a 17-0 UC lead with 9:42 left in the half. But from there, the Bearcats went dormant for the remainder of the half.

They had their chances. Cole Smith, who connected from 30 yards out for an early 3-0 lead in the first, hooked a 44-yarder in the second quarter and heard the boos one week after his misses in South Bend.

Temple had a chance for a touchdown with five minutes left in the fourth but the second-team Bearcats defense stiffened, holding Temple four times inside the 10.