Jimmy Butler led the Celtics to an overtime win as the Heat split the mini series. 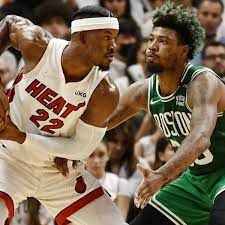 Butler dropped 25 points on 12/21 shooting, including the game-sealing fadeaway jumper over the outstretched arms of Al Horford in his first game since November 16th. Butler used his straight-line drives and rhythm pull-up shooting to create favorable looks all night.

Miami benefitted from Bam Adebayo scoring a team high 28 points to complement Butler and help out-duel Jaylen Brown, who scored a game high 37 points including the game-tying banked 3 in regulation.

The Boston Celtics struggled offensively for the first time in 2 weeks, as they posted their fourth lowest scoring output in regulation on the year. Jayson Tatum did not play well as he recorded 14 points on 28% shooting, both season lows.

Boston missed out on a chance to complete a perfect 6-0 home stand as they now go on the road for six games. The trip will begin in Brooklyn this weekend as they take on the Nets in a rematch of last year’s first round series.