Jimmy Garoppolo is Once Again an Untradable Asset – Here’s Why:

After years of rumors and speculation, will the Jimmy G draft day domino finally fall in 2022? 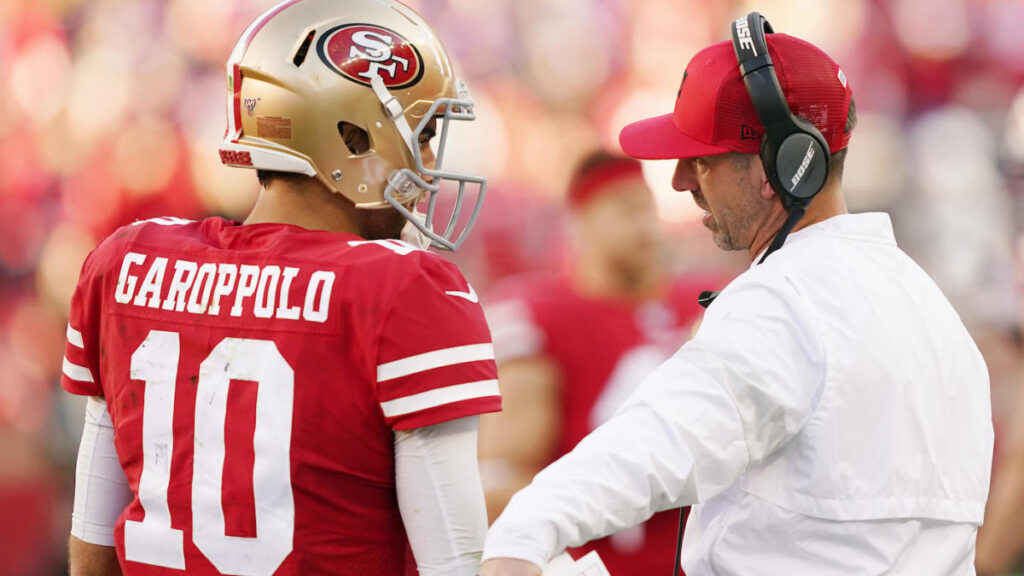 It feels as though Jimmy Garoppolo’s name is in the news cycle every single draft season. Prior to the 2017 Draft, it was rumored that he would be traded to either his hometown Chicago Bears or Hue Jackson’s Cleveland Browns. The then-young stallion ultimately remained a Patriots until that the trade deadline, when he was shipped to Kyle Shanahan’s 49ers for a second round pick.

With Trey Lance getting reps in the Bay Area and Kyle Shanahan blabbering about the QB room, I wanted to bump this story I wrote from April.

The #49ers were bluffing on Jimmy Garoppolo then, and they still are today.

Then last offseason, the QB’s name was floated in trade rumors yet again. After San Francisco traded up to the third overall pick to draft a young QB to groom, Garoppolo was as good as gone. He was thought to have been coming back to New England, or maybe – once again – back home to Chicago. At the time I thought San Fran was bluffing, and bluffing hard. I thought Jimmy was an untradable asset due to his his contract, his no-trade clause, and his current market. I wrote about it last April:

After trading a haul to the Dolphins for the third pick in the NFL draft, all signs point to the San Francisco 49ers drafting a quarterback on Thursday night.

Head coach Kyle Shanahan and general manager John Lynch have job security, a playoff-ready roster, and are bringing in their new franchise quarterback. Everything seems to be falling into place for the Bay Area club. Except for one thing: What are they to do about Jimmy Garoppolo?

A report on Monday from MMQB’s Peter King indicated that the 49ers have lowered their asking price in a trade for the quarterback.

They’re bluffing, and the rest of the league should call them on it. The 49ers have no leverage in the Garoppolo situation. He is untradeable.

Just like last offseason, Jimmy’s contract, his no-trade clause, and his current market all still stand in the way of the 49ers moving him. Garoppolo still makes a lot of money ($25+ million), his no-trade clause means he controls where he goes, and even if thats the case – his market is once again slim.

According to our friends at BetOnline.ag however, there’s a chance Garoppolo could still be traded prior to the start of the 2022 season. Here are the odds for his next team, if it isn’t the 49ers:

Carolina (+275) seems to be involved in every single QB rumor under the sun these days, and it’s because frankly I don’t think Matt Rhule knows what he’s doing. I had a lot of confidence in Rhule coming out of Baylor, but the Panthers have pretty much been an unmitigated disaster since he arrived in Carolina. Maybe Garoppolo would help change things? Though it may likely happen, adding another highly paid QB to that room doesn’t seem feasible.

The Steelers (+700) are another team that needs help at QB. They signed Mitch Trubisky as their “starter” when free agency opened, but much like Carolina have been linked to every single bridge quarterback this offseason. Garoppolo is a better option than Trubisky, and could make Pittsburgh a playoff team immediately.

I beg Mickey Loomis to go get Jimmy for the Saints (+1400). He makes them an immediate Super Bowl contender. Loomis has made decisions before to get New Orleans under the cap, and he’d be able to do the same if they brought Garoppolo into the mix.

Like I said above, Jimmy (and his contract) are virtually untradable. However, if he somehow finds his way out of the Bay Area – teams will want his services. He’s a top 32 quarterback and absolutely deserves a starting job.